Hi! Any idea why this is happening? No usage?

What is your node version?

My node version is v1.39.5 I think this happened when I updated docker and the container restarted. No neighbors on subnet… Could try to restart the machine to see, if it goes up again.

Current version is 1.42.4.
You probably stopped getting ingress because your version is not up to date.
You should update and then check if it has resolved your issue.

OK. Thanks! Checking now… Here are the full details. 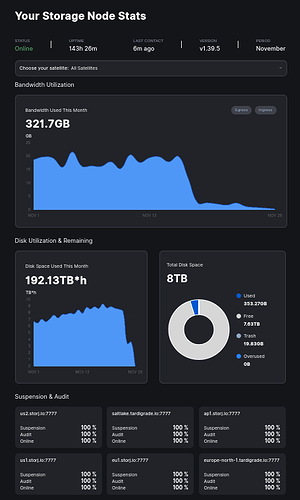 This definitely looks like a version issue.
To update automatically you should setup Watchtower: Software Updates - Node Operator

I am not sure how soon Watchtower will auto-update after install. So I guess best way would be to do a manual update first and then setup auto updates with Watchtower.

where it says storagenode, it is the name of the node, right

Yes, it’s the chosen name for the node.

OK. Thanks! I will monitor, if things change these days. Maybe not much usage is my other thought as the version was way above the minimal required.

Minimal version is the version that keeps you from getting suspended or disqualified. But ingress stops already if you are I think 2 versions behind.

It just last several days Egres and Ingress are very low, US people not work, so low use.

Not really. Started on the 18th and getting lower ever since. Hopefully it increases again. The node is 8TB. I plan to add 4 more nodes of 20 TB and 2 more of 4 TB. I see good potential, but it needs usage to make it worth it.

After upgrading I see some positive movement. Most probably related. Thanks!