It’s very decreasing the bandwidth in this days. will it be the summer vacation period? my ingress is in average 3GB to day for node and egress don’t is upper 10GB. waiting for september when the companies reopen.

hardware upgrades and whatever

it seems to be a very predictable pattern, today here its the end of vacation… so most people on the roads and i guess less data traffic, which sort of makes sense.

so i’m betting that we will soon see a major uplift again.

It’s very decreasing the bandwidth in this days 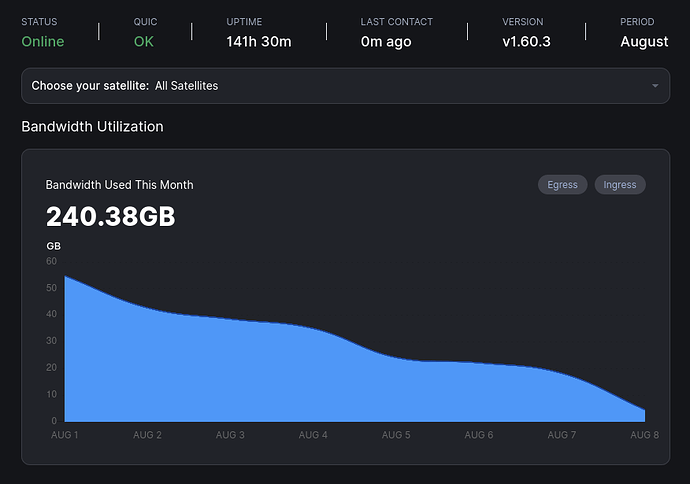 meh only thing i would use EXT4 is as a boot / OS drive, because ZFS drivers can be weird.
also is it really possible to avoid fragmentation… seems like a tricky thing.

never really liked defrag anyways, always seemed like it would only very temporarily fix the issue, then for it only to come back worse… so never really done that even on old school windows

Ext4 is not immune, see this thread: On Ext4, fragmentation and the filewalker

Anyone else’s estimated earnings for this month drop like a rock? This month’s estimated payout is 20% less than the past several months.

Anyone else’s estimated earnings for this month drop like a rock? 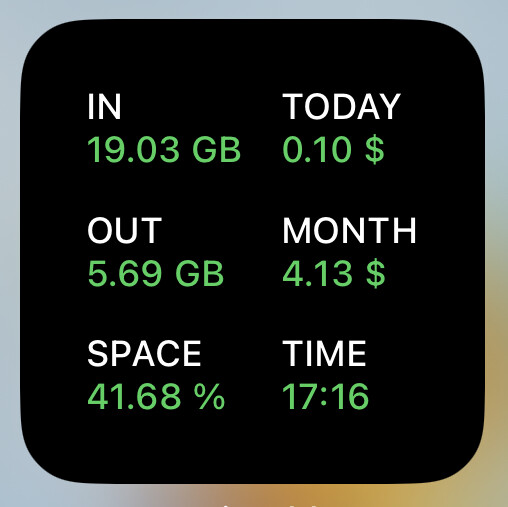 holidays suck…
same here, very low earnings this month…
ingress is up these last few days, so that is something.

also it’s possible storj is slowly phasing out the test data they don’t need…
so we are starting to see more and more seasonal deviations, based upon when large corps do backups and such, i would think…

I don’t think that’s it. Income from saltlake has dropped by 2/3rds. I think they stopped egress from that test satellite. I only see a few MB per day now on that satellite. Unfortunately this will mostly hit long time node operators. New nodes likely barely see a difference. But yeah, it’s hitting me hard. As well as other long time node operators.

To be fair to Storj Labs… this kind of had to happen at some point. Nobody is paying them for that egress, so it was a pretty huge cost to them. And customer satellites are taking over, providing quite a bit more egress.

If there is likely to be less egress on Saltlake, do you think they are planning to move someones Disk utilisation from that satellite, so it can grow with true data… ?

if that makes sense ?

I can only speculate. But I think they may want to keep the data reserved on nodes for moments where there is increasing customer demand. But they’d have to consider the risk of node operators with full nodes exiting this satellite.

@john could you maybe address this change in saltlake egress and future plans with test data, like you did a while ago? This is quite a big change for long time node operators.

We appreciate all the feedback and engagement from the storage node operator community. While we’ve been doing a lot of testing as we’ve developed, we’ve only just recently reached production. We’re very excited about what the future holds in terms of customer demand. We’re also really happy with the growth of the storage node network. While the network is really in its infancy today, we expect to see steady growth of the network both in terms of customer demand and capacity. Since launching …

I do have an update (Note I tend to use all the deadlines). For context, I’ve posted a couple of updates and mentioned this in the Town Hall about how we use test data on the network. This post should give you some more visibility into how we use test data and what you can expect over the next few months. What are we doing with test data? Text data serves a number of different purposes, some of which may be more obvious than others. The main uses for test data are: Storage Node Incentive - …

This is the last 90 days of egress for the Saltlake sat. Clearly somethings happening with test data. 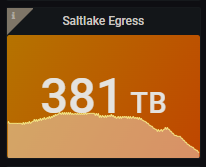 Yes, it shows on the earnings. I wasn’t aware about the extent of the testing data upload.

Saltlake egress seems to be back for now. Lets see if it sticks around.

John’s posts I linked earlier mention some reasons for that test data to still be there. SNO incentives is one. But it is also there to reserve space for possible rapid expansion in case of large customer onboarding. As long as the egress matches customer behavior roughly, it doesn’t matter whether we host test data or customer data, as we get paid the same for it. And until earlier this month it has matched customer egress for years. Since the egress is already back, I’m going to assume this was just temporary.

Is there no ingress for slightly outdated nodes?

EDIT: Updated all notes to 1.61.1 and now got ingress again

Hi @TechAUmNu
Correct. The node version must be within 2 updates of the latest to continue receiving ingress. Egress will still work.

Keeping your node up to date, changes to storage node software! PLEASE READ this thread!

The minor release schedule for us is 2 weeks, so, this means storage nodes have 4 weeks to upgrade to the latest release.

Does that match up with what the nodes say? 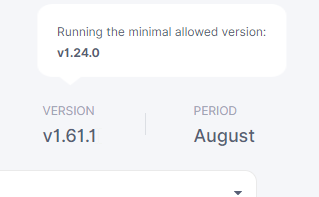 Should also say there what the minimum version is to have ingress.
Or a message saying why there is no ingress

The second point isn’t yet implemented as far as I know. So although it could be phrased differently your node could still egress data when running version 1.24.x