My node is new, online for just over 8h. I see activity, space and bandwidth, everything looks online and green. This is my second node to set up, and I don’t remember the previous one hanging at 0 like this, but I don’t recall.

I checked the logs via docker logs storagenode and there are a lot of INFO logs, just looks to be blobs being written for the most part, and occasionally repaired or read. Nothing looked unusual to my eyes. 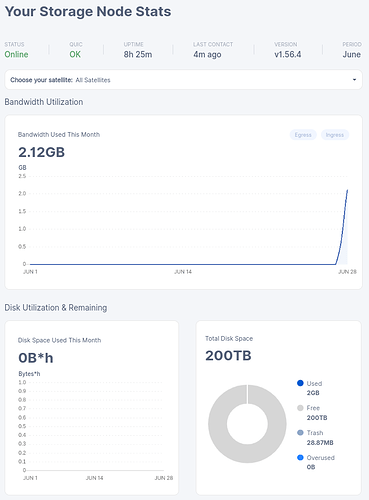 the disk space used this month isn’t live updated… i think it updates a couple of times a day…
so nothing to worry about… generally if the logs show uploaded and such, not a ton of errors its usually fine…

After 12 hours on the network, suddenly I had data reporting there. It hasn’t updated since then, now that I’m 23 hours in. I expect that once I hit 24h uptime, it’ll update again.
Makes sense, no need to update the stat realtime.

this graph shows the satellite registered data stored on a node.
so live updating that would grow exponentially with network growth, because each node would need to be updated, so it’s basically not possible or could lead to issues…

the graph can also be rather volatile from time to time, if the satellite is busy / overloaded it might not finish the reporting within the 12 hour period or even within the same day… so it can be basically zero some rare days.

doesn’t mean anything it will tallied up on later dates, doesn’t mean its not registered, just that the satellite haven’t had time to finish the tally.

so don’t obsess to much about that particular graph.