since a week I am experiencing download timeouts from several satellites (once a day, no specific satellite) and download successes (only) around 93%.

I have the feeling my provider has changed something. All the rest seams to be fine, no other errors or warnings in the logs. Repairs 100%, audits 100%.

Any idea, where to search or what to do? I assume losing permanently 7% directly means -7% download payouts. That’s not that less.

How old is your node and what kind of setup do you have?

on the 25th of dec my download successrates suffered a bit… not sure why.
either storage latency or network bandwidth limitations.

i would suspect you to be affected by the same…

week avg graph in proxmox for my 16TB node

my successrates has improved to 99%+ so its most likely down to storage latency, i did a rather extensive upgrade on the 23th so my drop is most likely partly related to that, along with the peak in egress at the time.

is your disk CMR or SMR?
and do your drop in successrates persist over longer periods?

and yes drops in egress would mean less earnings… not exactly 1 to 1 tho…
the avg earnings for a new node pr TB stored pr month is about 4$
1.5$ of that is the base TB earnings the remaing 2.5$ is the earnings from egress of which you would be down 7%.

is your disk CMR or SMR?
and do your drop in successrates persist over longer periods? 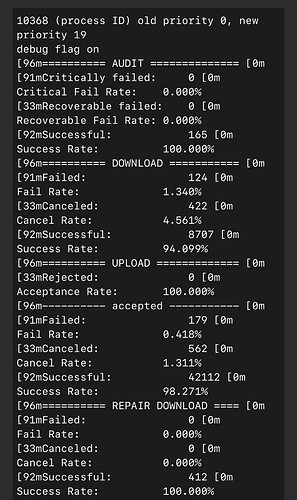 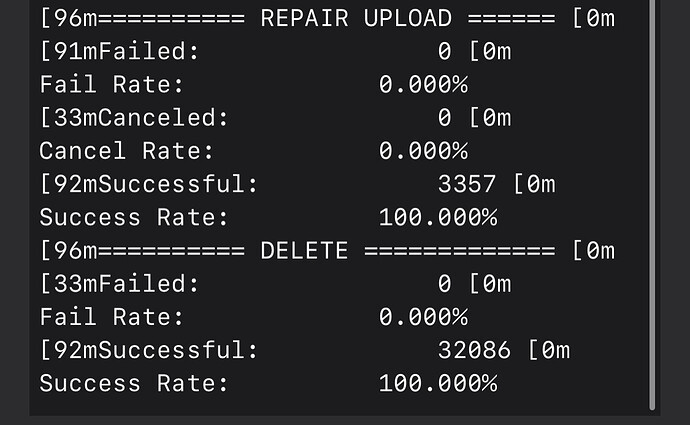 INFO failed to send packet: operation not permitted?
Firewall: All Ports Required For A Node To Function Properly?
SGC December 28, 2021, 11:32am #6

yeah you shouldn’t get those service ping satellite failed

Meaning the networks pings themselves are not correct or the connectivity is in trouble?

maybe regional blocks / firewall settings… then your online score should also be dropping…
checked my logs i don’t have any failed satellite pings for 27th and 28th.

seems weird, maybe @Alexey has some insights.
i’m not really that adept at node troubleshooting.

then your online score should also be dropping…

Hmm. 99.85% +/-. Had small OS update downtimes. And the one and single satellite ping timeout per day might not have a huge effect on the numbers. Don’t know. I think it has something with network latency to do - at least my regional network.

a half decent easy network test is to just try and run a continuous ping at like microsoft.com or storj.io or whatever.

when you cancel it with ctrl+c it will show you the number of packets lost and their times, which can be useful to tell if there is any indication of network/internet issues.

from windows you do search or run cmd
and then in the command prompt you run ping -t www.microsoft.com
and double ctrl +c to end it.

let it run for many hours or a day

from linux cli its just ping www.microsoft.com
and again ctrl+c to end it

there also exists a ton of different software for such things, but i just like the default ones because i rarely use it on the same computers, saves me the trouble of installing stuff every place i go test.

and usually ping is more than enough to make a basic evaluation.

yeah that is a bit higher than what would be expected in most cases.
certain seems like you have a network issue.
next you could try to ping your router / gateway to see if it’s local network issue or router / internet related.

seems slightly better… but like i said… some loss should be expected, its rare for it being flawless…

my successrates for today is 99% + for both download and upload…
also a packet lost doesn’t mean the data stream is interrupted, it will just be retransmitted.

to the router no loss:

I’ve updated a router’s setting to priority the node’s IP.

I can also adjust the DSL settings from “max performance” to (more) “stability”.
Not sure, if that helps.

Just because you’re seeing similar issues doesn’t mean that’s ok. Packet loss normally shouldn’t happen at all. I did a test on my end and these are my results.

During this I figured I’d give it a bit of a hard time and aside from my 4 nodes, running chia and ethereum mining, I added a video stream from the same device to outside my network, ran a few speed tests and downloaded some large files. In the mean time I was constantly watching youtube videos. And yet…

The large downloads and speed test did make the ping times go up to 2x-3x as high as average, but that’s it.

Now I feel like I really have nothing to complain about with my ISP considering the average ping times of around 4ms. Higher ping times are absolutely acceptable… packet loss to that extent… not so much.

well i’m testing my network now, and will be replacing my isp soon because they are shit at their jobs.
it certainly wouldn’t surprise me if my isp is to blame.
not only have they had like downtime like once a month for the last year.
crashed for 9 hours, and recently when i was retesting my internet speeds i was getting numbers that was worse than my old 400mbit/400mbit connection, even tho i supposely am suppose to be on 1Gbit sync fiber

still 1% packet loss shouldn’t affect the network much… at worst it might slow it down a bit.
but yeah higher than i like to see…

router priority for the node did not help:

not sure, if that helps for analysis:

I have noticed that Storj is more sensitive to this than most other things. I actually got briefly disqualified in the early days (back when disqualification was happening at 90% and could luckily still be recovered from). That turned out to be my routers fault. I never really found out what it was that caused it, but factory resetting the router fixed the issues in the end.

But I should add, I never noticed any issues with anything other than Storj. So while the issue was definitely on my end, only Storj seemed to really have a problem with it. The connection was still fast and other stuff unaffected.

router priority for the node did not help

If you’re referring to QoS, I generally advise to keep that off. It’s not all that great and can cause more issues than it fixes.

been testing out my LAN, it does seem like my pfsense has some sort of minor buffer issue, might be related to my packet losses, will be looking further into that…
the pfsense documentation tho very good doesn’t have any easy answers on how to deal with the issues, all the recommendations seems to either be default or already implemented when i initially configured it.
does only seem to account for 0.1% of the dropped packets internally, but perhaps the external interface is more … stressed…
ran an external test from a vps and gets 0.8% loss again…
it would seem the fault for me atleast and most likely is with my pfsense… but i must admit i do put a rather big demand on it, and i’m sure it can be rectified with some sort of advanced configuration… if this is truly the case.