The total always shows current data as far as I can tell. I understood what you said, but there is no way we can check that now. We’ll have to assume it’s now fixed. But I would still expect the held amount to be listed like this for the earlier months. 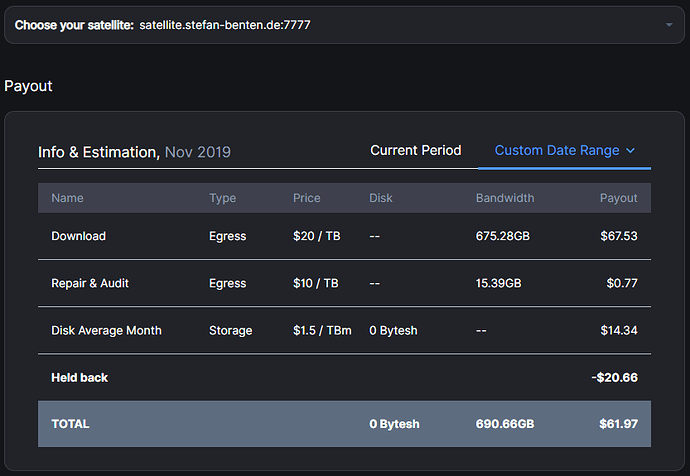 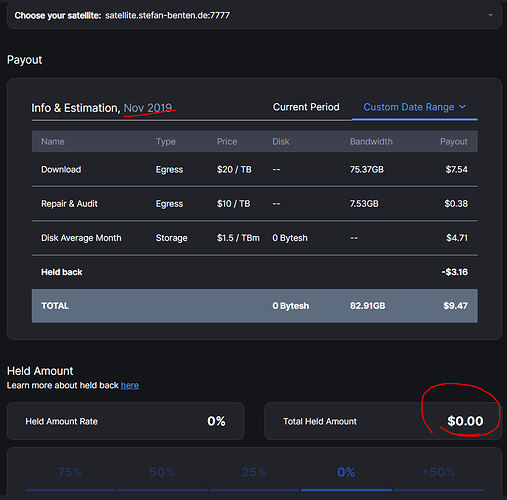 The issue I mentioned in my first point earlier was that total held amount kept increasing after Jan 2020, even though held amount rate was 0%. Unfortunately I did not screenshot this as evidence after I ran GE.

Right, like I said, the total always shows the current value. Only that top overview shows historic information. So… 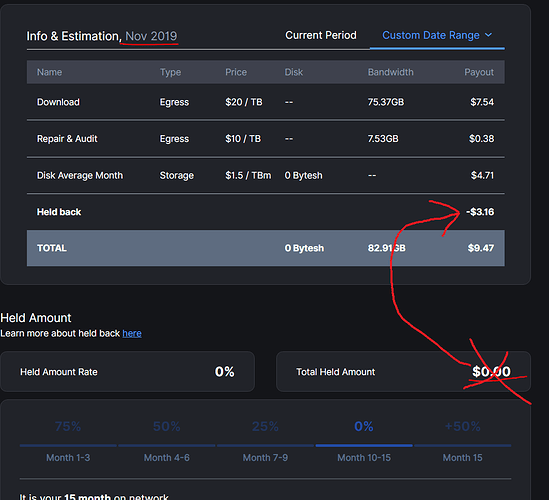 But yeah, the issue you had seems to be fixed, so nothing to do now.

Yea, too late now.
Moving on to May 2020 earnings script paid is lower than dashboard, any ideas why?

Compensation for lost payout for saltlake in the previous month due to delays in processing.

Time for a new update, here are my findings. [image] During payouts the STORJ value fluctuated quite a bit. As a result etherscans estimates were all over the place. I used 0.14 instead, since that was what it was actually hovering around during these payouts. Unfortunately I can’t be exact without the exchange rate used for the actual transaction. I kindly ask to include this in the databases with a future update. Let’s start with held amount payouts. It looks like this confirms what I noti…

I would like to ask to make it consistent with dashboard. At the moment script shows 0.0% and dashboard 100% , it’s confusing.

Typo aside, this user asks what’s wrong when his suspension score is at 100%. This is why I flipped it around. If you name the score after the negative effect, people assume high numbers are bad.

Hello, During my holiday my computer wich has storj running crashed. I managed to fix it but now all the sattelites say suspension score 100% can i keep it running hoping it goes down or should i uninstall and never use storj again?

Just a small update today. Storj seems to have switched to using 720 hour months to align with exactly 30 days, instead of the actual average hours per month of ~730. Effectively this means we get paid for $1.50 for storing data 30 days instead of for storing data an average calendar month. This means we’re making slightly more than the earnings calculator was displaying. This has now been fixed and numbers should better align with what’s shown on the web dashboard. In my case the numbers are now exactly the same across web dashboard and earnings calculator.

Thanks for the heads up. Unfortunately my nodes are all on docker, so it’ll be a while until I get this update and can provide an update to the earnings calculator. Apologies for the slight delay, but I’ll get to it when I can.

Looking forward to the update!

This issue has now been fixed with todays release. I apologize for the inconvenience and the delay for those who got this node update earlier than I did. It sucks to have to wait for a fix. But to make up for it I implemented some new goodies. We now have uptime as recorded by the satellites with the new uptime tracking system. With more verbose warnings for different scenarios that may cause issues. I’ve also reshuffled the layout a little bit to make sure the longer status line doesn’t get in the way of the important stuff.

Here’s a few examples of the more detailed warning messages.

Please note, there is currently a bug that prevents the uptime to be updated in the first 30 days. This is on the storagenode end. So I don’t expect this will show correct information in the first month.

Additionally this new update requires node version v1.12 or later. The database changes made to the node were not backwards compatible.

Big THANK YOU for the update!

I wouldn’t expect that error to begin with, as the script only reads from the databases. I just tried making them read only and the script ran fine for me.

Nice update. Good addition with the uptime scores. Also good to see that it’s showing to be expected results for the current month on Stefan-Benten satellite. Looks like it’s not communicating with the nodes anymore as my uptime is showing 0%

OH - thanks @BrightSilence - I missed that.

Runing the last versión of the script on an 1.12.3v storj node…