I got suspended on 2 nodes, because of my internet provider

Does anyone have an updated list of the Satellite folders? I need something like the information below but with the updated/new names and folders:

Because i got disqualified on 2 nodes, because of my internet providedr. They had an issue last night for few hours. Probably a lot of packet loss. It appears it happened during the night, so i couldn’t do anything. Previously it happened during the day and I just unplugged the cable from the node, but now I couldn’t. Why doesn’t STORj give us at least 24h to recover from any issue that we might have?

Anyway, I am very disappointed, i grew both of my nodes, for more that an year.

Thank you in advance!.

Does anyone have an updated list of the Satellite folders?

You can use this posting: ERROR collector unable to delete piece - #12 by BrightSilence

I have even bookmarked it.

I see this has been linked a lot, but I can never find it myself and it’s a bit hard to keep up to date in a random response. Might want to update your bookmark to the topic I just created.

I noticed one of my responses in an old topic being linked to quite frequently listing this info. I figured it might be a good idea to post it in an easier to find place where I can also keep it up to date. Active satellites Customer facing Satellite Address: ap1.storj.io:7777 (formerly: asia-east-1.tardigrade.io:7777) Satellite ID: 121RTSDpyNZVcEU84Ticf2L1ntiuUimbWgfATz21tuvgk3vzoA6 Sat.ID hex: 84A74C2CD43C5BA76535E1F42F5DF7C287ED68D33522782F4AFABFDB40000000 Blobs Folder: qstuylguhrn2ozjv…

OK, in that case can anyone explain to me, what will happen with the data that I have on my disk for those two satellites that I am disqualified from? 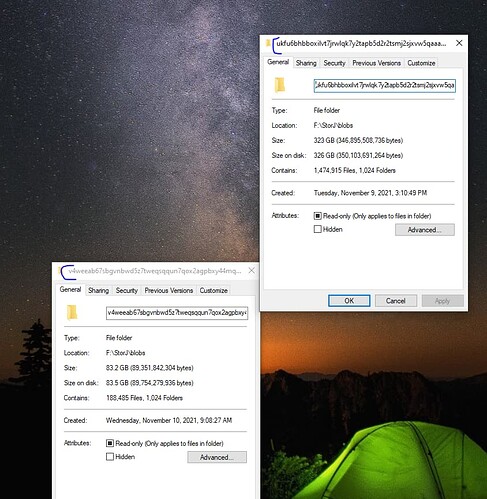 Should I delete everything in those folders manually? That is around 400GB

Oh yeah that’s nice.
But wouldn’t be the category Node Operators->FAQ->Satellites the most appropriate?
At least that would be the path I would go if I’d look for this info.

Because i got disqualified on 2 nodes, because of my internet providedr. They had an issue last night for few hours.

We have had this previously that on some occasions disqualifications can be very quick: Got Disqualified from saltlake

It had happend to me to but Storj was so nice to undisqualify my node. My advice would be investigate what happend and if it is a similar case, you could kindly ask maybe it helps. There is no guarantee of course but I would not delete the satellite folders too quickly, if I were you.

I think you should start with a thread about what happend to your node and what led to disqualification.

well i did that in the past … an year ago i think, when the issue happened the previous time and it had no effect

If you don’t let Storj know that there might be an issue then there is nothing they can do.

I think quick disqualfications are a problem. As SNOs are considered to be home users who might have family, a job and maybe even have to sleep somtimes, a disqualification should not happen within a couple of hours where a SNO cannot do anything to solve the issue because he might be sleeping.
So if we see these types of disqualifications more often then Storj might be willing to re-consider their approach.

But wouldn’t be the category Node Operators->FAQ->Satellites the most appropriate?

I would actually recommend a support ticket. But they’re going to be rightfully quite critical about to what extent it may have been caused by an issue on Storj Labs end. If there wasn’t an issue on the satellite side, in all likelihood the disqualification will happen again at a later moment. So reinstating the node will not make sense. Even if you can promise the issue has been fixed on your end, Storj uses a trustless architecture and requires you to prove that on a new node.

By default you should assume your node will not be reinstated. In the example @jammerdan linked, they found out there was an issue on the satellite side that lead to the early disqualification of nodes. This is why it IS important to report it here when you think the problem may be on their end. But it’s also why it is highly unlikely your node will be reinstated if no issues on the satellite end are found.

By default you should assume your node will not be reinstated

I think the same. However, I think it is unfair as jammerdan said, because we have families. I was out all day yesterday. Came home, took a shower and went to sleep and found in this morning that may 2 nodes are disqualified on two satellites . Very unfair!!! It was probably a hung switch somewhere in my internet provider, because they fixed it in less than 10 minutes after i called. It’s a shame that there isn’t anything like a grace period. For example, if the network sees you giving false audit, it should suspend you for 24h or 48h, don’t know. But enough for you to resolve your problem. Or to get the node out of the network, for example unplug it, shut it down or something. After that time is passed the network could test the node and if it is good to permit it back in. Those disqualifications are … just a loss of time and data. Like me, I lost more than an year building them up.

Disqualification only happens if your node sent an error that the file is missing back to an auditing satellite or returns invalid data or fails to respond to the same audit 5 times in a row (within 5 minutes) while online (which causes a single audit failure). You would need to have at least about 10 audit failures in a row to be disqualified, more if they are spread out. In the case of time outs, that means timing out on a minimum of 50 audits.

All of these signal serious data reliability issues. Timing out on audits is probably the only one that doesn’t necessarily mean you’re missing or corrupting data. But imagine what would happen if nodes had a way to dodge audits like that? You get a lot of leniency by getting 5 chances to respond within 5 minutes before even a single failed audit is registered.

Furthermore, these rules aren’t about to change, so if the issues are on your ISPs side and you can’t do anything to resolve it, there is little use in reinstating your node as it will just run into that issue again.

Now I have argued for a more stable way of dealing with scores here: Tuning audit scoring
It got an initial positive response, but haven’t heard anything about it since. I’m guessing there are different priorities atm. That could possibly have saved you, but if they are not about to implement something like that, you’ll just hit the same wall again.

What other issue do you suspect?
It is running fine all day after the ISP fixed the their problem.

Why do you think I will have problems again? I didn’t have such for an year or more.

hi My mistake, sorry. It appears that actually i haven’t been disqualified, but just suspended. I checked just now and my 2nd node is totally green without any warnings. GREAT!!!

What other issue do you suspect?

Generally data loss or corruption (or malice, but I wouldn’t accuse you of that). Disqualification doesn’t just happen. And when it happens it means the node is doing something seriously wrong.

It appears that actually i haven’t been disqualified, but just suspended

It’s still worth looking at what caused it in the first place though. But not irreversible.

What do you mean? I don’t understand. The only issue I had was the one with my ISP … please tell me what exactly you mean.

It just seemed you jumped to that conclusion, since you didn’t post any logs with errors for audits or repairs. But if you’re sure that’s fine.

i’m had lots of weird stuff and stalls happen with my nodes… and i have yet to see even a single data audit failed because of it.