My node is disqualified

can you check please, why my node was disqualified? I dont see any error and my PC was all the time online.

Welcome to the forum @pancherz!

Did you check your logs for download failed and GET_AUDIT error messages ?

No, because the log-file was too big (2 GB). I delete them and now i dont have any error in the log file, but my node is still disqualified. 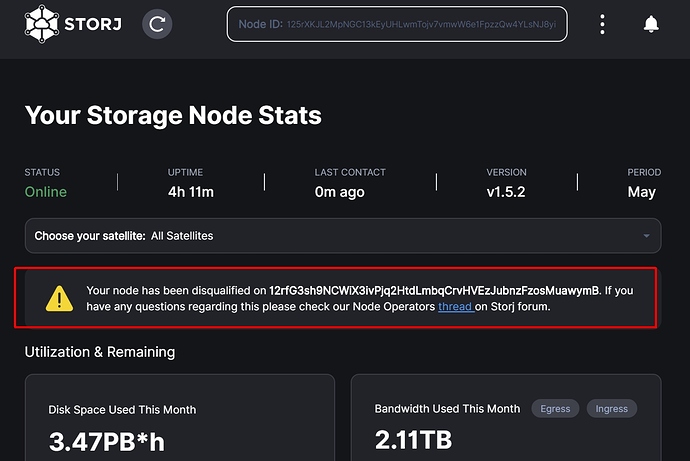 I’m afraid you’ve thrown away the evidence of what went wrong. There’s not much you can do now to figure out what caused this.

But now the logs would have to be rewritten, that’s where the error should be, right? Do I have to reconfigure the node and start from scratch? What do you think?

You seem to only be disqualified from one satellite at the moment, so that seems a little premature. The logs won’t be rewritten, just new log lines will show up, but since that satellite has disqualified your node, it won’t audit it anymore. You will see the errors if other satellites are encountering the same issue though.

Lets try to see if we can save your node on the other 5 satellites first, then decide what to do with this node. We need to known what happened anyway to prevent the same issue in the future.

To get some info you can look up the audit score using the earnings calculator or dashboard API. 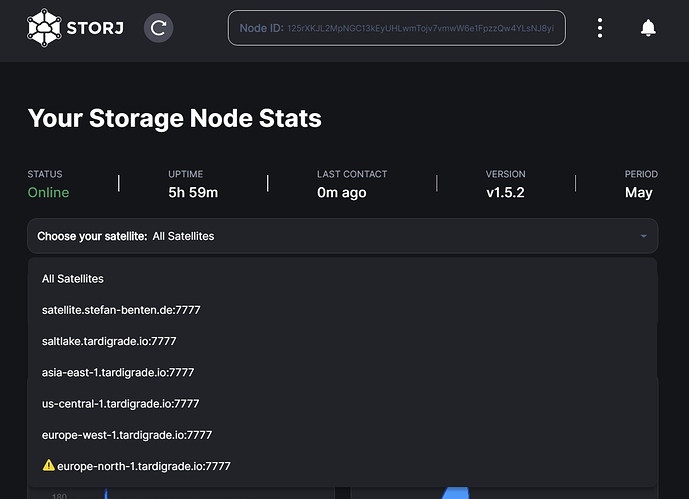 Sorry, here the english version…-)
Hello, you are right, only now I see that only the “europe-north” satellite has blocked me. Can you tell me what I can do to get the satellite to pick me up again?

Disqualification is permanent. You probably have failed too many audits because of which your node was disqualified.

because the log-file was too big (2 GB)

2GB isn’t too big when you have 12TB HDD. You should know logs are important to diagnose any issues.

2 GB was the log-file, i coludn’t open it

What i should now do with this node? Keep it running?

It would have taken a while to open the file but it would still open. Also you could search for errors using command prompt or powershell without the need to open file. Can you try to retrieve that log file ? It would be a long shot but it will help you find out the cause of failed audits.

I’ve decided to re-create the node. So the old configuration is no longer available to me, the node was quite young (2 months). So thanks for your support, since the problem with deleting the node is solved, the ticket can be closed.

In that case, you should make sure you don’t make same mistake with your newer node. I hope you have to start from scratch with requesting new token and creating identity. You can’t use anything related to old node at all. Make sure storage and identity folders are deleted for old node.

Also don’t delete logs unless you really need to. Even in that case save it somewhere else just in case.

the same at me, look here …

Yeah, i delete all data and restart all again. Thank you for your assistance