For the last 3 months Oct, Nov and Dec they were all under the threshold so were not distributed for those months. However for Jan 8th/9th my node has finally been paid for Oct, Nov & Dec unfortunately it was short paid by $3~

Now, it’s one thing to not be paid for a few months due to “gas fees too high”, but it’s another to be underpaid.

So my question is this:

The amount owed to SNOs is in US dollars, but the conversion from USD to STORJ occurs at the time of transaction, or mere moments before.

So, depending on the exact date and time of the payment, you may have received more or less STORJ tokens, but the conversion rate from that moment should have guaranteed that you received the right amount, in theory.

If you received a payment, I don’t think satellites would owe you anything more than what you received. Check your node dashboard, it should display the “Undistributed payout” in the “Payment Information” section. I reckon it should be $0 now.

If you really believe something went wrong after double-checking, I guess you’ll need to contact support.

Check your node dashboard, it should display the “Undistributed payout” in the “Payment Information” section. I reckon it should be $0 now.

Small note on this. It can take a few days after payment before the satellites report back the full payout information to your node. And for my node this doesn’t seem to have happened yet. So this data may still be out of date.

After this data has been reported back, you can also use the earnings calculator to compare your nodes own bookkeeping to the satellite payout info. It will show any discrepancy in payouts.

Here’s an example from Saltlake in November on my node.

Small differences are common. I think it’s usually because your node was still holding data that was already deleted and would later be cleaned up in garbage collection or when expired files are removed. If everything is right, this is always an insignificant amount. If you see bigger amounts, it’s possible that your node has had problems sending bandwidth orders back to the satellite. So once your payment info has been reported back, have a look at those numbers to check if there is something weird going on.

Now some smaller SNO’s may only receive a few $ per month but we’re talking over $3 short paid is a big problem.

etherscan.io shows actual $ value at the time of transaction

Etherscan shows an estimate that is often quite a bit off. If you’re going by that, it may just be caused by value fluctuations.

7 more TB coming your way. I’ve pulled the plug on this project. 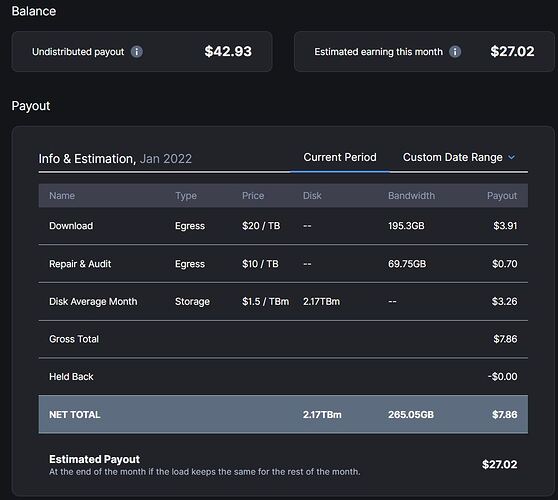 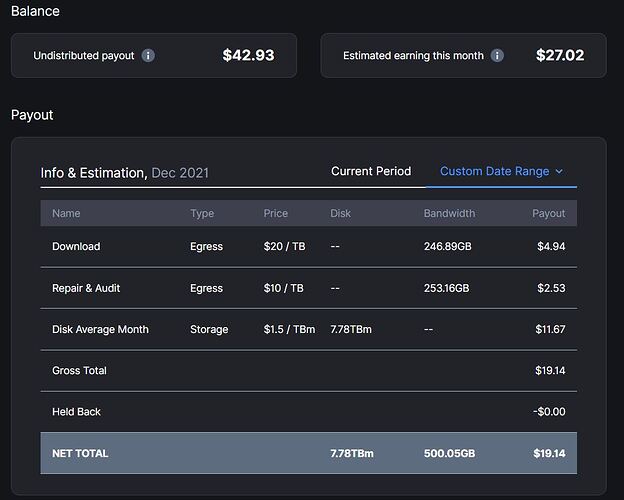 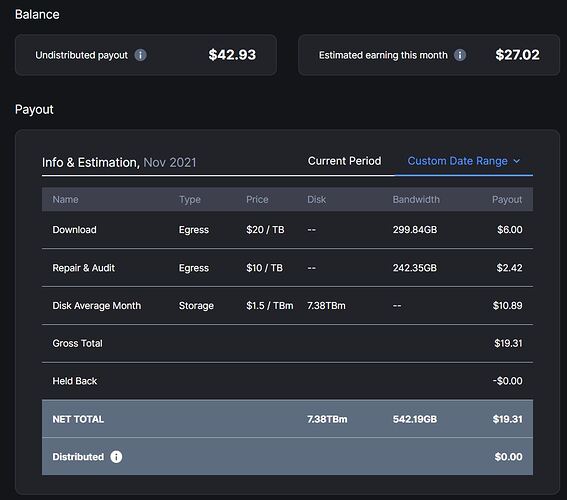 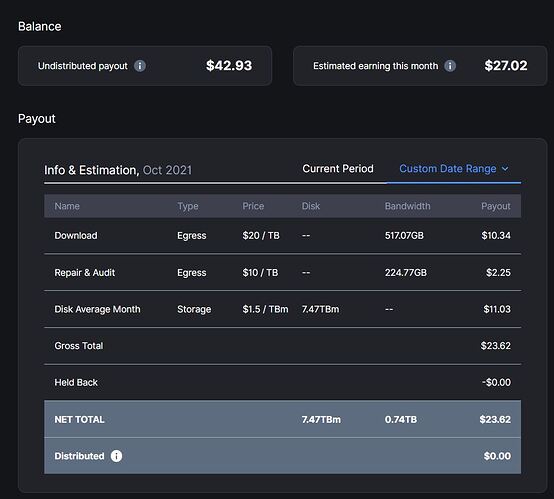 FYI there was a significant fluctuation of STORJ prices during the time payouts were sent out. This may be the reason why the number of STORJ tokens you received may not correspond to what you expect you should have received based on an exchange rate a short time later when the STORJ price was already significantly lower than before. We are sorry you find doubts about your payout to be sufficient reason to leave the project, even before this cycle’s payout stats have been updated on the node dashboards.

If you had filed a support ticket for this issue, we could have followed up on your specific payout, however to my knowledge we have not received any such ticket, and the information you posted here is insufficient to draw any definite conclusions. We wish you all the best in your future endeavors.

We always strive to resolve any issues our node operators may have regarding their payouts, and if we find that there was a mistake made on our part (which is highly unlikely in this case), we would be the first to admit that and take appropriate action to make it right.

stributed for those months. However for Jan 8th/9th my node has finally been paid for Oct, Nov &

Wow, im based in australia, and in the past 2 months 0% down time i have gained a massive payment of 0.07 cents… pulling the plug on this one i think… its not even on the polygon network so most of it will go paying network fees. 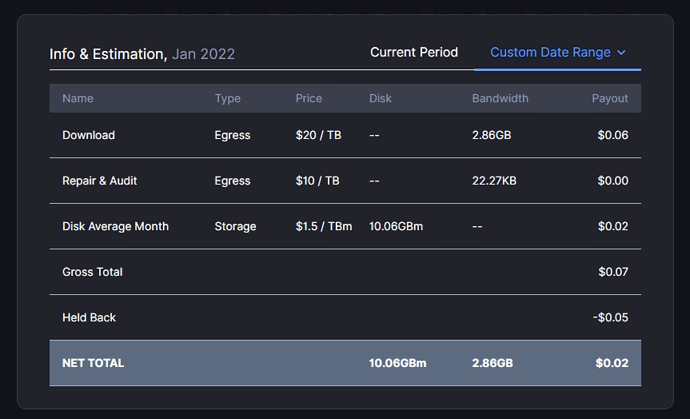 No, you will actually never get paid if you leave before reaching the payout threshold.

Would you care sharing your expectation (in USD) for your first 2 months?

lol im not a charity worker…
or should i talk to the elec company asking to reduce my elec bill cos im running storj?
PS: the get rich quick? i bought btc back in 2012…

lol im not a charity worker…

So ain’t I and still I am making good profits off of this project. Maybe I did something right that you did wrong? We’ll never know. Cya

I’m no charity worker either. My single storagenode runs on hardware which was already running anyway (as recommended by StorJ), so the increased usage, whether electric or internet is negligible. I’m on my 22nd month connected to the main satellites and am content with the $1/day my node earns.

A post was split to a new topic: On the main site is says users are paying 7$/TB for bandwidth. Where is $20/TB paid to storage node operator coming from?