Is someone uploading close to 10GB every night? My grafana dashboard indicates that.

It turns out it was our infrastructure team. They are working on a backup strategy for the satellite DB. The idea is to upload the backup of one satellite into the storj network. For the first tests they are using the QA satellite. That explains it.

benchmarks and warnings can only show so much, i think actually using the network for practical tasks is a great idea to have a sense of how its doing and how to optimize stuff…

It’s fairly easy if you just host your own trusted satellite list. But you shouldn’t do this. Lots of stuff can go wrong with test satellites and test setups. You should just run a separate node.

And this part may not be relevant to you since you are planning to run your own satellite, but since you responded to this specific topic, I just want to mention it for others. Test satellites and test nodes are updated to test versions which may not yet be compatible with production satellites and may still contain serious errors. You do not want to risk your production node by doing this.

Even in your use case I would absolutely advise you to use a separate node so you can control its version independent from Storj managed updates. At least until you have a production ready satellite that will be kept up to date with Storj satellites. But ideally you would set up your own version server so you can control when nodes will update on your schedule, which may not be the same schedule as Storj satellites.

It’s just a bad idea to mix them until you know for sure you have something stable and always up to date on the satellite end of things.

You could, but if you don’t expect heavy load you could easily host the node on the same HDD too. It would be effectively the same as adding the satellite on an existing node. My node for the testnet runs on the same array as well. It’s basically inactive, so that’s fine. (the array is also SSD accelerated, so even if load tests are done, it’ll still be fine)

It’s up to you of course. Complete separation of test hardware is always the safest, but if you think your storage can easily handle the additional load, just use the same storage.

Is this in config.yaml what config would i find this

Hello @littleskunk
Please remove the space between satellite addresses.
There was a problem when starting the node with your parameters. The node tries to connect to the main network satellites if there is a space between the names of the satellites.
Thank you. 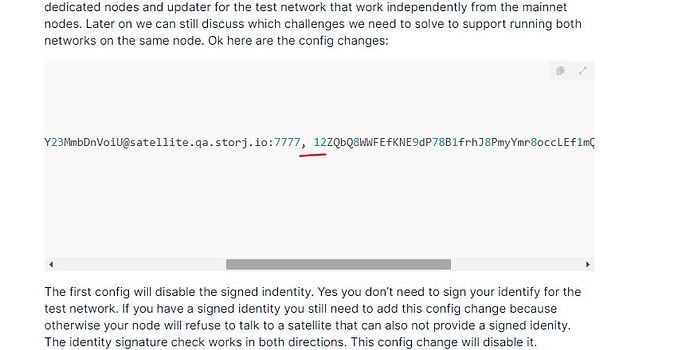 fixed. Now it doesn’t have space in the satellites list.

do you plan to open user accounts Testnet signup as well?

Had a bit of a weird thing this morning where all my nodes were offline, I think after a router update from my ISP. I managed to fix it but found my test node disqualified on this satellite.

The down time was 2 hours and 40 minutes. So either this satellite is extremely aggressive in disqualifying for downtime or something is off.

In case you want to look at any logs, this is my node id 1zyyGaWCkCnrVwTvigVfwqbMPAMCLAzE2hczBdrDgvUVHZ9qQx

Of course this is just a test node, so no harm done. But I figured I would report it since that’s what test nodes are for. I have full logs if needed. If there is no need to look into this, just let me know and I’ll exit the other satellite and start a new test node.

The QA Team is currently testing a couple of things on the satellite, including impact of “wrong defaults”.
That likely is the cause for the disqualification. I’ll inform them to revert the DQs.

Small update from my end. I just now found this node showing it was offline, which was a little unexpected since multiple other nodes on the same system worked just fine and a restart of the node without any changes fixed it.
It’s also still DQ’ed on the QA satellite, which isn’t that surprising as the workday has only just started in the US after the weekend. I’ll keep an eye on it in the mean time.

I also noticed that I posted this on the wrong thread as it was actually the QA satellite that DQ’ed me. My bad, feel free to move these posts to the appropriate thread here: Please join our public test network Edit: Thanks @Alexey !

There was a problem with the release binaries and we kind of crashed the QA satellite. It disqualified all storage nodes. I believe by now we have deployed a fix and removed the disqualification in the database. Your node should run fine again.

Technically we do have the same rollout mechanism for docker nodes. The problem is that it doesn’t work on ARM nodes. I hope we can solve that issue one day.

This is not an issue anymore… It works on ARM nodes now!

My node is still disqualified on 1GGZktUwmMKTwTWNcmGnFJ3n7rjE58QnNcRp98Y23MmbDnVoiU@satellite.qa.storj.io

How is it for you?

If you haven’t set it already please add:

Does the docker run parameter -e EMAIL=... work or is this a separate thing?

That should be correct yes. In my docker-compose file I have STORJ_OPERATOR_EMAIL=. That seems to work as well.