I’m having very low download levels this month - almost as fast as my uploads are happening I’m getting deletions so I’m getting less than 1GB net uploads a day (despite having plenty of free space). I’ll be lucky to get 2/3 of the download traffic I had last month.
Anyone else noticing this uploading/deletion with fewer downloads pattern?

Welcome to the forum @waistcoat!

I hope you know this isn’t mining. You can’t expect or compare any day’s/week’s/month’s traffic with any other day/week/month. As long as you are online 24/7 and not failing audits you are good.

Sorry my forum account is new, I’ve been read-only on the forums and haven’t required one until now.

I’ve been an SNO for 7 months and hope that eventually I might at least subsidise some of my costs. I know I’m unlikely to make anything substantial, however little by little my payments have been increasing, but with downloads being the major component of the payments I’m a bit surprised at this months projected figures (it’s worse than I originally thought).

Looking at my logs I can see some new upload/delete/never download patterns that I haven’t noticed before. I’m not seeing many more 'download cancelled; log entries than before so I don’t think I’m losing out on latency. Am I just being unlucky or is anyone else seeing such a change this month?

I’m a tiny SNO only holding just over 1.8TB at present.

Same for all of us:

Time to fill a disk FAQ

The shape of bandwidth is the same for all SNOs @xavidpr4. Here is how one of my Node dashboards looks like: [image] It simply reflects how the network has been used for the past month

You could also have a look at this thread where SNOs share their observations on how the network behaves:

oh i’m having fun… like 2 months ago i discovered another node on “my” subnet, found out he had been there for atleast a month, maybe with dynamic ip because he seems to be vanishing sometimes…
so initially i thought he had left… ended up finding out he hadn’t a month later, at this point i had made an extra node which i was planning on moving to a different subnet… but the technical side of it made it delayed by quite a bit… so here i am 3 months later basically haven’t grown the storagenode in atleast 3 months… at one point it was literally shrinking…

i started my node 9 months ago and i got 14.6 tb the 14 tb i already had around the 6 month mark, i was lucky to start at an opportune time, this has thus far mainly been an experiment in viability…
and i’m sure there will be more data coming in the future, storj labs are just busy with other stuff for now i guess… can’t be sending petabytes of data every month

Honestly I can’t see how they could keep sending data our way forever.
This will have to stop eventually one day, and data should come from customers.

I understand. Also it’s the holidays so customers might not be using the network a lot.

at one point it was literally shrinking…

Yea, it took me about 4 days to recover from that massive delete dip too. 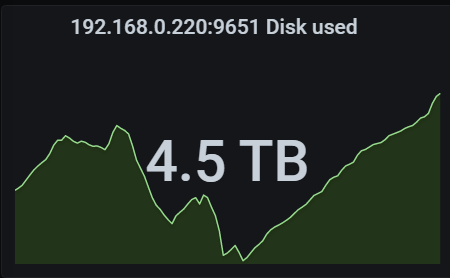 Out of interest, how did you scan your /24 subnet for another node?
I’d quite like to do that with mine to see whether I have competition or not…

used this, been quite happy with this little tool.
tho keep in mind it will only work so long as the other node exists on a default port, else it becomes a lot more difficult to track down. (atleast by conventional means, stuff like packet sniffing)
port scanning is nice and simple…
https://www.advanced-port-scanner.com

Just stumbled on a new Feature of http://storjnet.info/ and tough that can maybe useful for someone

Now you can check easily how many nodes are within an Subnet:

Keep up the good work @3bl3gamer!

haven’t tried this out yet, as i already know there is someone on my subnet and if he has more nodes now it’s just going to annoy me, so i’m just going to not look lol…

I tried it myself and it did find all of my nodes.
Pretty handy feature!

the mathematical chance of having a neighbor node, is very low…

but then in some cases it’s not really random, but a small ISP having a small block of IP addresses they maybe filling up 1 IP/24 block at a time… thus if two people with the same ISP lease a fixed IP address then they may be allocated into the same IP/24 block.

so depending on the ISP approach and just random chance your odds can be quite high and insanely low, since there are like 10 million or more different IP/24 subnets used on the internet …

even if only a little bit

I’m still amazed about how Germany has more nodes than the USA and all the other smaller European countries have lots of nodes too. So probability of multiple nodes on a subnet is certainly bigger in those.

remember the number of possible IP addresses x255 times the number of IP/24 subnets… which is 16.5million so that gives you 4228250625 possible node addresses… and some people maybe have access to millions of those… at their jobs… so you could take even a small scale data center and just create nodes out of it, thousands or even millions of nodes in one place.
this way they know that when they reach like 10mil storagenodes the entire ipv4 will be filled…

so it makes good sense… because they can atleast in theory filled the entire range ipv4 range, would make them like 1000 times larger than they are today… but still it’s possible…

while them becomming… 300000 times larger is slightly unrealistic… because we get close to those astronomical size numbers. 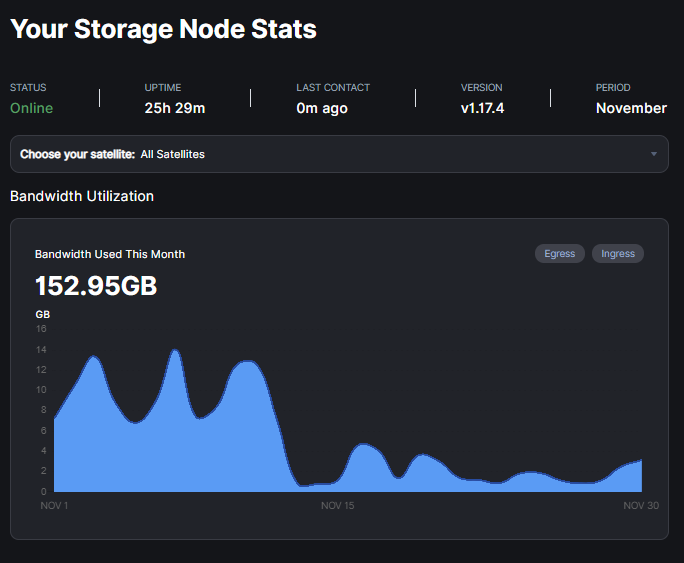 Until this month, I was used too seeing 500GB-1TB, are others seeing this type of drop off? Nothing about the speed or availability of my node should have changed.

I’m having very low download levels this month - almost as fast as my uploads are happening I’m getting deletions so I’m getting less than 1GB net uploads a day (despite having plenty of free space). I’ll be lucky to get 2/3 of the download traffic I had last month. Anyone else noticing this uploading/deletion with fewer downloads pattern?

In the last day or two of November my levels seem to have picked up somewhat, although it’ll still be a leaner month than had been usual. Noticed more repair traffic than usual too.

Egress seems to have picked up a bit in the last few days for me as well.