I was expecting to see my node quickly reach capacity but had a hardware issue that caused me a few days of downtime right around the end of my first month. Since then disk space usage has become flat leaving me wondering if this is due to the downtime or over abundance of nodes/storage?

vetting can take a long time, and until a node is vetted on all satellites it will not see full ingress from those satellites.

vetting a node fully from 1 to 6 months depending on how much data a satellite is sending out, ofc with less data from a satellite one will not really notice not being vetted to such a satellite either… until the flow of data changes from one satellite to the next, which it does from time to time… however some of them are fairly low traffic and thus practically irrelevant to the ingress.

you should expect to see about 500GB ingress pr month, and that it will continually get closer and closer to that over the first 3-6 months.

we have been at 500GB pr month for a long time, but it’s ofc not a certainty nor is it a certainty that it will keep being only 500GB.

storj has made major price changes recently so hopefully that will be reflected in the traffic in the future.

Are you seeing any ingress traffic? If your ingress is actually flatlined, your node might be running an out of date version. Nodes running more than 2 minor versions behind no longer receive ingress traffic. More than 3 previous minor versions will result in disqualification. The latest version is 1.31.2, so if you are on 1.29.3 or older, this could be causing lack of ingress traffic.

For Storage Nodes Multinode Dashboard Payout Overview For Customers Allocated Traffic If a customer requests a download but doesn’t execute the download we end up with a high amount of allocated traffic but a low amount of settled traffic. We use settled traffic for invoices and the allocated traffic for customer download limits. This difference is sometimes confusing to customers especially when they hit the download limit while the billing page is showing a fraction of that. We are work…

Im at 207GB so were at about the same ratio (i also started a couple of months ago). From the previous posts I think we’re doing well (the servers don’t want the data to be to centralized). Though the last couple of days there has been a higher ammount of ingress and egress of data (about 2GB+ a day for each category).
Sit back and let it flow in.

Thanks - This is very helpful. I am 66GB Ingress so-far this month with the downtime but will track it over the next few months to verify it continues to increase.

Are you seeing any ingress traffic? If your ingress is actually flatlined, your node might be running and out of date version. Nodes running more than 2 minor versions behind no longer receive ingress traffic. More than 3 previous minor versions will result in disqualification. The latest version is 1.31.2, so if you are on 1.29.3 or older, this could be causing lack of ingress traffic.

The week I installed an update was available requiring me to learn the upgrade process for my docker image - I ended up taking the time to setup watchtower and now I believe the upgrades are automated.

had a breakdown in the beginning of the month, so a bit behind. 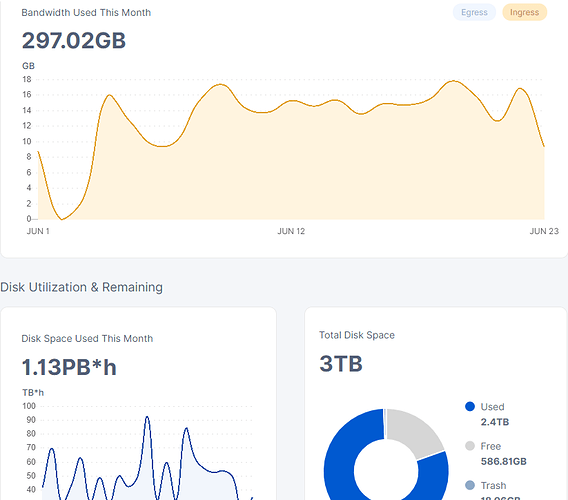 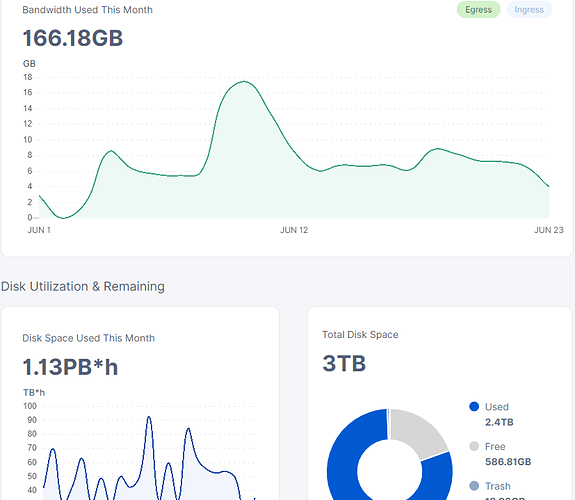 to see how vetted your node is to the specific satellites can be done with the
earnings.py script / earnings calculator which you can find here.

but it looks like your is progressing about as would be expected.
the node i exampled here is 10 months old, but it’s a bit behind where it should be, due to running for a time with other nodes.

else we have a thread running for requesting bandwidth comparisons data
since it can sometimes be difficult to gauge if one has a optimally functioning node.

so if in doubt if stuff is running correctly its easy to compare ingress to someone else.
ofc this only works for fully vetted nodes, and often nodes close to being fully vetted.
depends a bit on the mood of the network, sometimes like noted earlier ingress will come from different satellites.

so one can see near 100% of optimal for a week and then data switches satellite and it will just drop off to near zero… until vetted for the new satellite.