What amount of trash is normal?

My node is about two months old, and I noticed that my garbage volume is constantly growing, and at some huge pace. Two weeks ago it was about 29 GB, and today it is already 52 GB.
The connection is stable, there have been no breaks and downtime in the last 3 weeks, but the garbage has grown almost 2 times. 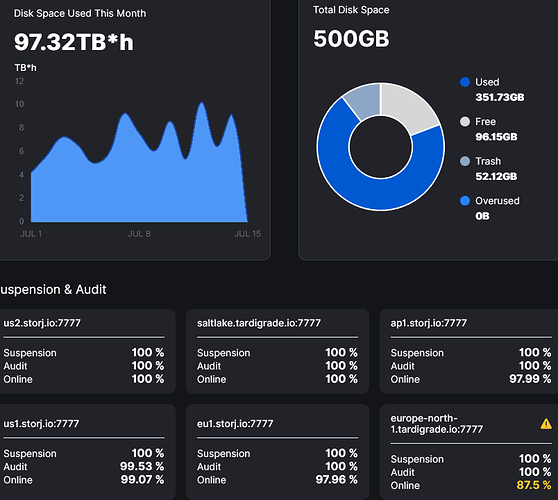 Is this normal? How can this be treated?

Yes. The data on your node is real data from customers who are uploading, downloading and deleting data from their buckets.

How can this be treated?

Ok, but why it’s size did’t decrease over time?

Trashed items will/should get deleted after 7 days in the trash folder. So maybe you will see some changes then.
If you want you can check the files and folders inside of the trash folder on your node if they have timestamps much older than 7 days. Normally they shouldn’t which means everything is running fine.

The problem is that all files in /trash folder are fresh, created less than 7 days ago, but size of trash never decreases.

created less than 7 days ago

Files in trash will not get deleted before 7 days have passed.

there is no normal i would say…

that being said, there is something about files not being accepted by a node quickly enough which might lead to trash…

Older files have been already deleted, while new files were moved into trash in the meantime.

My nodes have anywhere between close to zero trash (nodes that are full for a long time, apparently mostly storing long-term data that customers just don’t want to delete) to ~60GB (fresh nodes).