True but I’ll let storjlabs worry about that. As long as they are paying us well, I don’t see a reason to be worried about the amount of user or test data.

I have less than 50 mb of usage for last week (but alot of repair traffic). Is at ok? 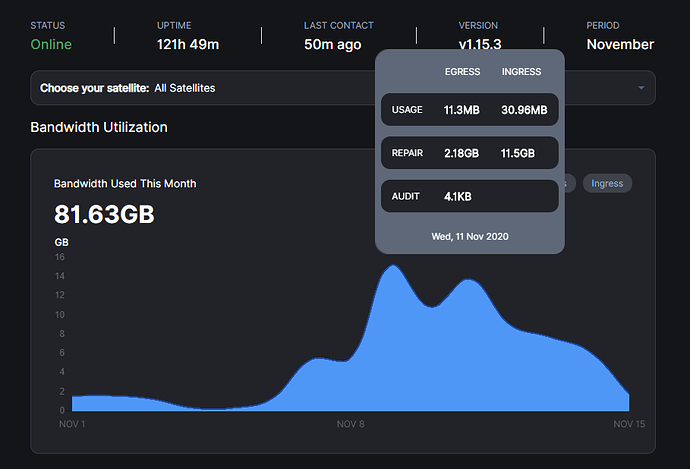 Complete stats of my node can be found here: http://konard.ddns.net:14002/

I’m also getting very little traffic lately. I still don’t have centralized monitoring so i logged in and checked a few nodes at random and they were all online. (i figured something was wrong)

This is unfair to compare. You’ve completed GE on 4 satellites. Once GE is complete you won’t get any more ingress or egress traffic.

@Stob A week ago I still had usage traffic and I`m still connected to one of satellites for few months, I should be working anyway.

It’s still unfair to compare. You’ve limited yourself to 20% of the network as only the europe-north satellite will ever give you ingress or egress possibility. Also for the first 5 days of the month you were running an old storagenode version so the ingress was 0 bytes. Now it’s been upgraded, ingress in continuing.

You can use the realistic earnings calculator as a guide for your 500GB node, which is now expanded - Realistic earnings estimator. For the limits you’ve placed on the node you’re well within the margins.

It was not because of old storagenode version, my node was limited to 500 GB (and it was full), and a week ago I’ve changed it to 1.75 TB.

it’s the same for everyone, mostly slow going for now…

Yeah, it has slowed down.

If i understand correctly seeing recent posts and bandwith drop for everybody, 99% of the data we usualy get is test data. Since test data is ~0 ; what we see now is true customer data?

You can always check the dashboard, saltlake and europe-north are test satellites. all others are real customers.

that was also my understanding but now I am more skeptical.
I find it hard that unpredictable customer data would behave that way. The only explanations I can come up with are that either all satellites send us some kind of test data or there’s been some problem which caused customers to upload less data.

I say that because europe-west, us-central and asia-east used to have a pretty stable average bandwidth use and it suddenly dropped to very low levels exactly the same day.
Maybe someone from the storj team could shine some light on this so that we don’t have to speculate…

Drop in traffic on the “client” satellites at almost exactly the same time.

Thanks, @Pentium100
It really interesting statistic, I would like to expose more details about one node traffic:

all power in the region goes out, even if not immediately, because of various latent effects.

Could be possible that there’s less data because of all the issues with orders so everything is going to a stand still.

I don’t think that would really matter much.
I mean, it was also just weekend. If some tests stopped during the weekend they may be resumed today again. Slow traffic happens, there isn’t necessarily something wrong. We all know it will also pick up again at some point. So I wouldn’t worry about it so much.

Oh I’m not worried seems like a lot are comin out of the wood works cause data is low me I don’t care it gives my nodes a break this month.

Drop in traffic on the “client” satellites at almost exactly the same time.

Which suggests all satellites are testing in fact, not only saltlake. Oh well…
I just hope Tardigrade will eventually be actually used a lot by real users, but I guess Rome wasn’t built in a day.

@Odmin Amazing charts by the way.

agreed @Odmin charts are very nice and easy to read… unlike some peoples charts that make alchemical texts look trivial.

Which suggests all satellites are testing in fact, not only saltlake. Oh well…
I just hope Tardigrade will eventually be actually used a lot by real users, but I guess Rome wasn’t built in a day.

shouldn’t really be a big surprise tho… ofc there maybe different kinds of test data…
there maybe the kind the use to pay us with and the kind they use to do more detailed tests.
might be that the data stored from the other satellites are long term almost never test data… ofc some of it would be… because they would need some way to track and verify stuff…