My repair egress is the same but usage has dropped to a quarter of what it was a few days ago. What gives?

clients use data when they want and how they want it not predictable.

i guess easter traffic is low, i think we saw something similar around xmas, if memory serves.

Should be the baseline only

Should be the baseline only

That would be lovely.

egress and ingress now is normals both today and yesterday. the easter holidays are equal at Christmas. users not use the network and it’s normal

Egress has been pretty stagnant throughout May so far for me despite ingress going up. While 1 day beginning of May I had a 1:1 ratio I have see 1:5 now (egree:ingress without repair).
And I just checked: Estimated earnings for this month are below March earnings…

nodes older than 6 months should have more than 1/5 egress in relation to ingress.
for may mine look to be 1/2 or better for those around a year old.
and the 17TB one…
well it ofc manages an impressive over 3/1 egress.

does seem inflated, but the war in ukraine has turned the world on its head… if the worst thing to come out of it for storj is that we get more repair egress… something which is still far better paided than cold storage of 1.5$ pr TBm

it might not be as good as customer egress, but it’s certainly better than just idle storage.
because the expenses for us is the same.

earnings are down also tho…

really download is sort of the cheaper part for the SNO’s and the storage is the expensive part.
tho maybe i’m just lucky to have fast internet…

but i think we are many here with that, i mean you don’t think… oh wow i got slow internet… i think ill share my bandwidth with random people online to make money…

I actually did some digging into these ratios. Let me just start out by saying that just looking at a ratio between ingress and egress makes no sense. While there is some behavior that causes more recently uploaded data to be downloaded more frequently, larger nodes will have a lot more egress just because they hold a lot more data.

In order to refine the earnings estimator I dove into this by using a few newer nodes and monitoring this ratio between ingress and egress. After looking at a lot of data from different nodes, I have concluded roughly the following. For data ingress in a given month, about 15% will also see egress in that month. Note that for ingress you should only count normal ingress as repair ingress is actually ingress of data that has already been stored on the network for a while. Add to that about 6% of data stored in general and you get close to what your egress total will be.

For larger nodes that means egress almost entirely depends on total storage and not on ingress. But for smaller newer nodes the impact of that egress caused by ingress in the same month can be significant.

Note: Network behavior obviously fluctuates and the numbers provided are based on an estimate using a hand full of different nodes in different stages of their lifetime. Consider the margin of error for egress based on amount of data stored to be +/-2% and for egress based on ingress +/-8%. The latter margin is quite wide because I slightly limited data and saw a relatively big difference between last month and current month.

Not just looking at the ratio but also at the absolute numbers. On the very same node on 6th of May 14 GB ingress and 12 GB egress. Yay!

as usual i find your near scientific approach oddly satisfying… lol
duno the exacts of the true numbers but i fully agree with the approach.

there does seem to be a trend towards recently uploaded data being verified … duno how else to describe it.
because from the few cases where i have looked a bit into it, the downloads often happen shortly after the upload… cannot say if that is a trend or not… but it sort of made sense to me so i didn’t dig much further…

i mean if people are making a backup, verifying that it’s actually backed up, makes good sense…
as an unverified backup can often be worse than no backup at all…

and then as nodes age, it seems egress decreases over time…won’t say its a 100% thing but it sure seems so from all the information i have seen…
i often calculate a monthly earnings pr TB stored, to compare stuff…
and that sort of always seems to trail off for older nodes… ofc i have no nodes much older than the launch of the enterprise network…

its been a long time since we have collected a lot of data about node behavior in one place…
maybe its about time we do that again.

Is ingress down? Overall it is low since a couple of days here.

yeah ingress has dropping… most likely a combination of Q1 + Q2 backups being done and the oldest backups being deleted.
summer weather, vacations and other summer events and all that…

but it did catch my eye, almost made me go check if something was wrong…
i’m sure it will pickup again in the near future.

offloading data from russia has probably largely completed as well.

Putin got his data off the network, afraid of further sanctions affecting their ISPs…

I’m seeing decreased bandwidth as well this month. Had a few hiccups with going down during some electrical storms but overall direction is down. 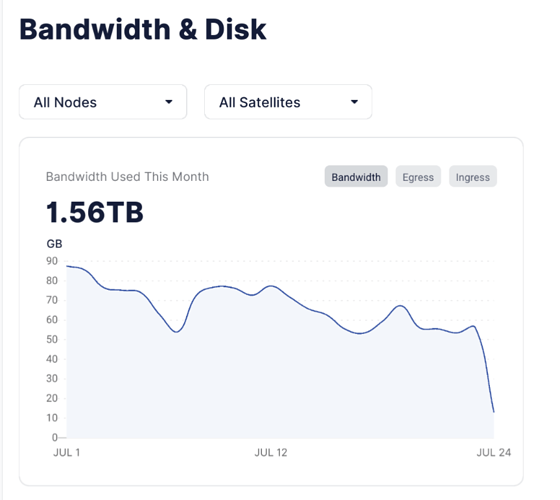 Here it is looking good again…