How much customer data is currently on the network? What is the percentage of upload/download of these customers?

There is a little over 8 PB on the network now, which is a mix of test data and user data Capacity is about 20 PB.

8 PB on the network now, which is a mix of test data and user data Capacity is about 20 PB.

Why is there such a big difference between 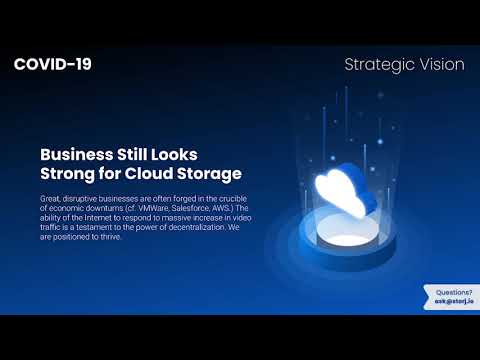 Hmm, that is a good question. I missed that in the slide deck. I’ll try to find out.

I’ll try to clarify these three questions for these numbers and get back to you.

I interpreted the voice over as saying nodes advertise 37PB of free space, but Storj internally uses a more conservative metric which amounts to 15PB. Maybe that last metric has since gone up a bit and is now closing in on 20TB?

Storagenodes could easily say they have more space than they actually do by using thin provisioned volumes or running multiple nodes on the same storage, effectively sharing free space more than once. I think the number of nodes with free space is probably a more important measure than the total amount of free space. Either way, I’m sure it’s more than enough. And many SNOs will simply expand when things fill up anyway.

Thank you for responses

Time flies when you are having fun! This concludes the time allotted for the hosted portion of the Q&A, and we’ll be closing out the threads shortly.

Thanks again for being with us during Town Hall