Docker for windows 10 - do i need watchtower?

I so i have a node running on docker in windows 10 home. And i have 2 questions

Do i need at watchtower container? if yes - does anyone have a guide to set it up?

Also - my docker does not automatically start if the server has a reboot - does anyone know a way to troubleshoot this? it is causing some downtime for me. I have to manually start the container.

Hi @HGPlays
I can’t advise on the watchtower but I think if you set the docker run command to include --restart=always then it should start automatically.

Hi thanks for the reply - do you know how to setup the watchtower?

I used this command to start up the node:

Also - when i say docker does not start after a reboot - i mean the docker desktop application.

when i say docker does not start after a reboot - i mean the docker desktop application.

Okay - i hope someone can find it - i will also look for it myself.

Do i need at watchtower container? if yes - does anyone have a guide to set it up?

The storj node software will auto-update internally, the watchtower is required to auto-update the container in case the internal dependency changes.

Thanks alot.
i will run it

i mean the docker desktop application.

Docker desktop is starting only after login to your Windows account. This is how it’s designed…

You can run the docker desktop binary by Windows Scheduler. Configure the task to run independently of login, you will provide your login and password when you apply changes.

Do you have a guide on this?

But if you configure to run it by Windows Scheduler, this option will not be needed, altogether with autologin (which is insecure by the way).

I will just give it a try.

I auto login really that insecure tho?
No one has acces to the pc?

Experts believes that is insecure. If anyone get an access to your PC, it will be able to do anything because there would not be any protection like the requirement to provide a password at least.

I tried to enable auto login on docker desktop - but the app still does not start on its own. 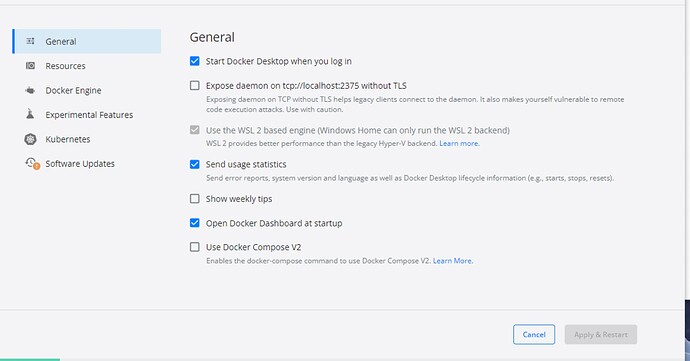 Also I see that your Docker Desktop application wants to install update - maybe you should allow it to do that.

When i had the newest update the docker desktop whould not launch at all. So i actually had to downgrade…