Does anyone know what is the size of an average Storj Node?

Does anyone know what is the size of an average Storj Node? Is there such statistics? I am asking, because I have been on the network for more than an year and my node is about 2.3TB at the moment. It earns me around 7.3$ per month. So … to receive a payout, I would need to wait 6 or 7 or more months(ifconsidering 52$ min. payout for September 2021). Doesn’t that sound ridiculous? I don’t see how anyone will start with StorJ … he/she will need 5+ years to build up a 10+TB node. So the new steps are only for the people that have been on the network for long time and managed to build up big nodes 10+TB …

What exactly is StoJ’s strategy? Can anyone explain it to me? What is the goal ?

I have a 27TB node running for a few years and only 7TB is used. All new hardware dedicated just for storj. It even has a TB of ssd nvme as read & write cache. I have no idea how others are filling up their nodes.

Most people don’t store much data (as in a few TB top) behind a single subnet.
Some long-timer SNOs may have something like 10TB to 15TB maybe.

I reckon anyone having more than that has access to several different /24 subnets, which is rather rare. I don’t think they’re “your typical SNO”.

My node has almost 19TB, but it is very old - at one time there was a network wipe and my node is older than that.

20TB is probably the maximum one can have in a single /24 subnet, but currently ingress is very low so it would take years to reach this.

My node has almost 19TB

Same here, a little over 19TB across 3 nodes on one IP. Been around since the last pre release network wipe. I think we’re at about the max you could have. Since we both have good performing nodes that are pretty much always online.

Hi
Can you please share what NAS you are using?

Why would anyone do that if not for earning money from STORJ? Someone running a 30TB NAS, for storing his/her movies and photos? Don’t think so.

We cannot assume that.
Maybe there are users, who have a 30TB for some reason, several PC for mining with idling storage one of the examples.
The other example - ex-HDD miners. They want to have something from now useless HDDs.

I run nodes on home server, it was used as a media and game center, now it’s my Lab with VMs, and it’s running since 2013. Why not share empty space from its disks?
It has had free space on 3 disks from 5, so I running 3 nodes on it. Now they almost full.
Many SNO running their nodes on NAS. It can have a free space too.
There are some SNO, who running nodes even on rented servers, but their servers are used for something else in the same time, so the earnings from nodes used as a discount to their bills.
There are many other setups.
However, if you decided to invest to HW, then it’s your choice, no need to blame us for that

We never require to invest to anything with purpose only for Storj.

He was probably referring to my node that was purely built new to run StorJ v3.

It would be less expensive and less wearing for disks if you could start small as we recommend, even if you decided to invest to HW against our recommendations.
I’m not sure that power conservation would be noticeable less, one typical disk is used 5-15 Wt*h, but at least disks are not wearing.
If you uses RAID, the wearing would be even faster.

It’s a 31month node based off dashboard earliest contact to satellite stefan.b

It’s was a brand new Synology NAS with 2 Seagate x12 HDD’s, also running a SSD read & write cache (1TB) on a fibre connection 1000Mbps down / 500Mbps up. It was something I decided to do purely built for StorJ as an investment at the time. Even though I only had 6TB~ was used from the whole volume. I decided sometime this year to add 2 more drives X16’s to the bay and expanded the storage to 34TB. Usage seems to be very slow and as some older SNO’s have pointed out this might take years to fill which is a shame, if even possible. However H/W wear and tear is still done.

Node at present currently has just over 7TB filled. I have no idea how some have 19TB in the same timespan as me, unless they are closer to the satellites and their ping is lower.

A lot of upload happened around May 2020. At some point I had to stop ingress on SMR nodes in order to give drives some time to flush the cache.
Nodes using same hardware, but created in July 2020, have 3-3.5TB stored now.

Why would anyone do that if not for earning money from STORJ? Someone running a 30TB NAS, for storing his/her movies and photos? Don’t think so.

Well, me for a start. I have far more than 30TB total on line now. But I’ve always run a large amount of gear at home. This was my home network in my apartment in Montreal back in 2010. Except, I actually had far more than this in total. At one point I even had a blade chassis for blade servers at home. 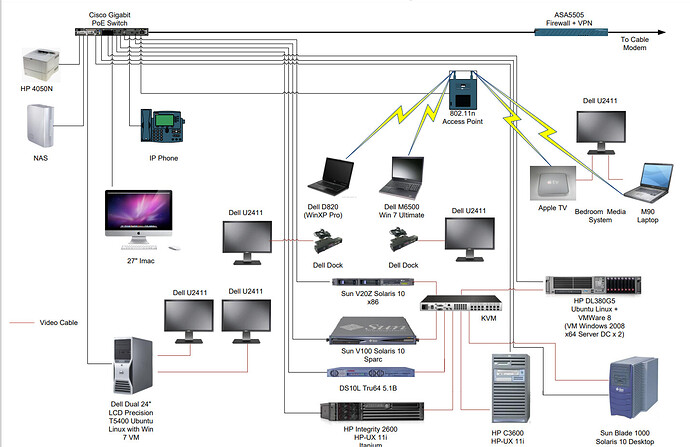 and this was my cisco lab from the same time period. 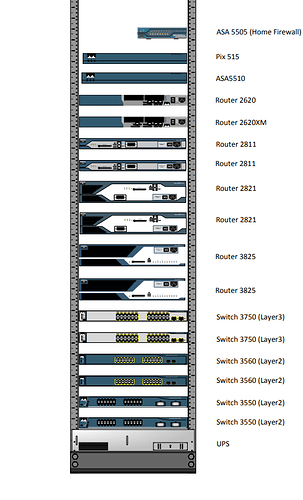 Well, me for a start. I have far more than 30TB total on line now. But I’ve always run a large amount of gear at home. This was my home network in my apartment in Montreal back in 2010. Except, I actually had far more than this in total. At one point I even had a blade chassis for blade servers at home.

WOW
But Why?
You have extra money that you don’t know on what to spend? I mean it looks like an expensive hobby. Other people buy old cars and resurrect them. But rarely you can earn good money on that.
Anyway, lets stop this. Everyone decides for himself.

In my case having the home gear directly lead me to the career I have had. Because I’ve always learnt to do more than just what my role was at the time. It has more than paid for itself multiple times over and lead me to both work and train in several countries.
A good example is I’m starting to get into Openstack at the moment (so will need to bring up a few more vm’s) as there is a project I might have some interest in joining soon.

It is always been this way with me. I had Unix at home (via a system called Coherent) well before Linux took off. I would download my email via UUCP over a 2400 baud modem lol. It has always been both my work and my fun. That experience led me to my first job as a sysadmin.

unless they are closer to the satellites and their ping is lower.

I have been fairly bad at running storage nodes. In 22 months I have about 10TB. I have 9 nodes still working, so average 1.1TB
As for why would anyone have 30TB…I have around 200TB, I don’t know exactly as some is cold