So… I’ve been running a storj node since december. January was the “best” month with lots of traffic. (I heard something about some testing that was happening at the time, but not sure). Also not sure, but when says piecestore uploaded {"Piece ID": "asdasd", "Satellite ID": "asdasdasd", "Action": "PUT"}, this is referent to the satellite right? It means the satellite uploaded data to me, so it is “Egress” for me right? This is what I saw the most last month and it makes sense for me, to be “my download”. This month I also see the same, also I use pfsense and most of my traffic is Inbound, which also makes sense. But now my Ingress is higher than Egress (which contradicts what I saw). In the first printscreen, you can see and the bottom left what was my disk usage at 31/Jan/2020 and at the bottom right what is my usage today 10/Feb/2020. The disk filled ~100Gb so I need to have at least 100Gb of Egress right? Also at the top there are 2 chrome windows with the egress and ingress at the dashboard and at the right of that there is an older printscreen from 20/Jan/2020 also to compare the space remaining (I give 2TB to the network).

So am I missing something here? I’m a little confused Pfsense print, wan(in) is self explanatory (from internet -> local). I have a vlan dedicated to server stuff and the graphics for lan and servers are reversed compared to the wan, since it is based on the interface “position”. Servers (in) is when traffic enters the interface (hardware -> interface) (upload) and Servers (out) is when it leaves (interface -> hardware) (download). It is easier to look at the wan one and see that most of the traffic is inbound. 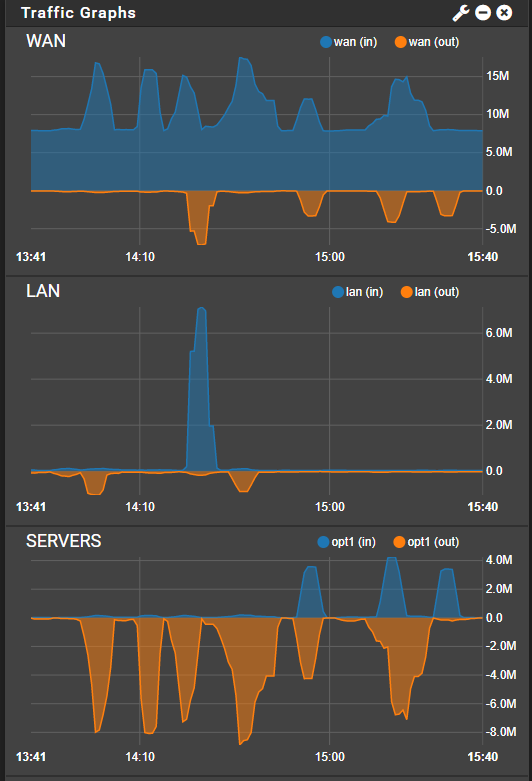 Since I can’t post more images/links, I’ve uploaded to imgur

Oh, so basically all this time I was thinking the other way

I think that my confusion came from the earnings.py, since Egress is download and I thought it was my download, not people downloading from the node.

Yeah! Got it! I was messing everyting

For some reason when I went to reply to you everything was gone thought you deleted it, Also I wanted to say alot of people get it confused you just gotta get used to it thats all.
And welcome to being a SNO

Yeah, no worries pretty much everyone is confused by that at first.
There was a lot in your first post. I hope this explained everything, but if you have more questions, feel free to let us know. Lots of people around who are happy to help out.