Hey guys, looking for some help with finding information and any possible solutions to my recent disqualifications. I set up my first node a few days ago on the 25th and the startup was rocky with many port forwarding, firewall and VPN issues, which caused a lot of inconsistent uptime and now I am disqualified on 2 satellites but I don’t exactly understand why as it was likely about an hour total of downtime and I did not lose any of the data, so I was curious as if there was somewhere such as a log to look at my nodes history so I could work out what exactly the issue was. Though I did notice that my node’s uptime had reset. I was also curious if there is a way to keep this from happening at a point of future downtime? I have a few more HDDs that I would like to add to the PC I run this off of and it would take some time and would hate to get further disqualified. Thanks for any help, here are some attached images relative to the issue: 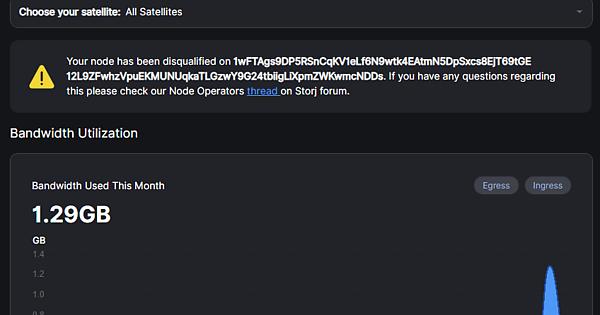 Firstly a disqualified node theres no coming back from unfortunately. Meaning you will need to create a new identity and start fresh.
For the ways to get logs check out FAQ's - Node Operator. It has all the info you need to pull logs, Without any details of what OS your running or how everything is attached to your system, its hard to tell you what the problem may have been.

The images you posted, indicate that you were failing audits, which would be the reason for the disqualification. I also infer from the node version # that you’re running on windows (since that version isn’t released yet for docker)

I’m assuming you followed the official setup instructions and paid attention to the suggested drive connection methods (SATA, USB, etc.) and avoided all network attached storage protocols. So based on those assumptions, my first thought for failing audits would be that there might be an issue with your drive (i.e. satellite requested confirmation of a stored piece and your node failed to confirm that it was present.)

Other than that I won’t be much help as all of my nodes are run with docker on machines running debian distro(s).