Is my Subnet killing me?

I’m pretty new to the storj node game. I got myself set up with 2 nodes running on raspi 3B+, one with a 1tb hdd, the other with a 5tb hdd. Setting them up was easy so thanks for the clear guide on installing storj on a pi.

But now that i got everything running i found out that i could get a free upgrade with my ISP to get 5x download and upload speeds, which ofc i took. I was hoping for a higher bandwidth use after the speeds where updated, but nothing happened. As a matter of fact, my total ingress even went down. Im currenctly receiving only 2,5GB per node per day, which was quite the disappointment.

I tested the connections and ping, everything is great pulling 180 mbps per pi with a ping of 16ms.
Am i not getting more data because there is (close to) no traffic (in my region)? Or has it got something to do with me being on subnet 255.255.255.0 and the fact that there are almost 300 nodes running in my small country, making it probable that many of them are on my subnet? Or am i doing something wrong?

Both pi’s are running on the same IP both with diff ports.

I think the storagenode operators are doing so well that the customers can’t keep up.

Traffic has been very low lately, 2.5GB per node and per day doesn’t seem too bad.
It’s hard to draw a conclusion at the moment, once testing resumes and traffic increases it’ll be easier to see if you’re sharing your subnet with someone else.

Depending on how new the nodes are, they’re likely not through the vetting period yet. So that could some what account for the ~5GB/day ingress total. My two, fully vetted nodes have been averaging ~18GB/day ingress total and I have a static IP, so they’re the only two nodes on the subnet. The ingress traffic has been relatively low for the past 2 months. So I wouldn’t worry about what you’re seeing at the moment.

When/if we get another decent surge of ingress, I’d invite you to visit this page where some of us post daily stats to compare against each other to see how your traffic compare.

i checked the ones i am planning on getting isn’t molded… i bet they messed up the molding process, i was looking at something like that earlier also those where there are both sata and power … but decided i wanted it as standard as possible. i bet molding them are cheaper than, making the shells and collecting them by hand, so i could see why they would do something like it… ofc its not difficult to imagine cheap wire plastic melting and wires being pushed close together during the molding pr…

Also, try out the payout calculator to get details on vetting status of your nodes. The vetting process can take quite a bit longer if both nodes were started at the same time since they share ingress traffic and in periods of low ingress traffic. Typically vetting period for a single node would take 15-30 days, and occurs on a per satellite basis (you could finish vetting on Saltlake well before you vet on Asia as an example), and duration can be influenced by amount of stored data (i.e. more data means more audits). Also if both nodes are still working through the vetting process then that could double the duration.

Alright, sounds fair. They still need to get vetted, yes. I’ll shut up for at least a month, check if i am vetted & circle back to the topics u shared when traffic does pick up.

Well then 2.5GB is pretty darn good for nodes that haven’t been vetted yet.
If I’m lucky I get 20GB on my 6 month old node those days… Can’t wait for traffic to pick up again.

my week old unvetted node looks like this
and egress is ofc basically non existing…
this is my second node, so it will be sharing with the primary one… i think… not sure exactly how that works during vetting. 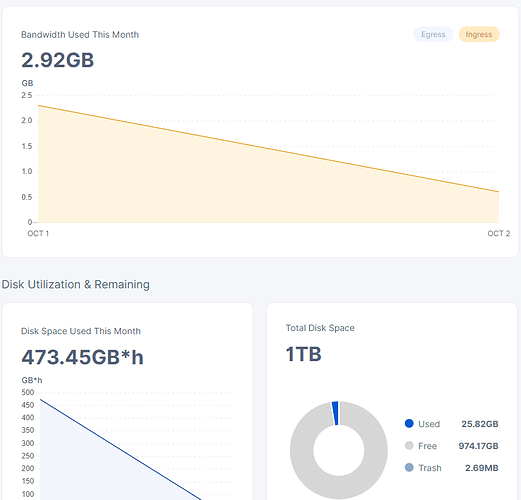 utilization of internet bandwidth can be rather complex… high bandwidth can help you get more data, but it would in almost all cases not be proportional to the bandwidth increase…

ofc then geolocation of customer and node comes into play… if there are internet bandwidth limitations like say across the Atlantic, where i often see my bandwidth being about half of what i can get in europe…

higher bandwidth ofc helps, but it’s just miles away from being that simple…
and yet sometimes it is… ofc