Is there a disadvantage in slowly increasing the storage space?

Hello, I have a server with a total of 8TB of storage space. I have already set up a node with docker-compose and set everything up test-wise. The node has now been running for 24 hours and has a max. of 7TB allocated. As I could read here, it takes a very long time until the storage space is even nearly used up.

My question now is whether I could also reduce the storage space significantly, i.e. first to 1TB and then steadily expand it in the node settings as soon as the limit of 1TB is reached.

The storage space refers to one partition.

You can do that and it won’t have any negative impacts on your node performance. Just don’t forget to increase the limit early enough because once your node is full, you obviously don’t get any ingress anymore.

You don’t necessarily need to lower the space though. I have some data on the array my node is on that I remove if the space is needed for the node, but I have everything assigned to the node already. The node doesn’t use the space until there is data to fill it. Just make sure you monitor HDD usage and free up space before the HDD fills up more than 90%.

Just make sure you monitor HDD usage and free up space before the HDD fills up more than 90%.

And to be on the safe side, do not assign more space to the node than you have free space. This way, if you forget to free up some space and increase node size, nothing bad will happen, other than you missing some ingress.

I have been slowly increasing the virtual disk size and allocated space to my node since the beginning.

Just don’t forget to increase the limit early enough because once your node is full, you obviously don’t get any ingress anymore.

Note that “node is full” will actually be with about 500MB of free of the space that you’ve allocated. It seems this is a bit of a buffer left by the satellites pushing out the data. With a few exceptions it is my understanding you will not see a node take up that 500MB. So if you go the route of only allocating a smaller amount to Storj with intent to increase as you fill up, make that increase before you get too full.

Thanks for your replies!

@BrightSilence
I like to manually increase the space because as far as i understood i cant go back on an easy way as soon as the space is used by the node right? So increasing is easy but decreasing is not really implemented.

Thats the reason i rather increase instead of decreasing.

Yeah that would be fine. It won’t impact payout until the allotted space is full. Indeed it is near impossible to make it shrink, so if you’re not sure you can miss the space, that may be the best approach.

you can use every space you have, for example I allocated all space to Node, and use not filed space with chia, i monitoring it all the time, and delete chia as storj is progressing.
Storj is very good long turn investment. for example i discovered that my first node 33 months old made

How much storage does this node currently use?

I have one node that likes to thread the needle, i’ve seen it at 0B a time or two. 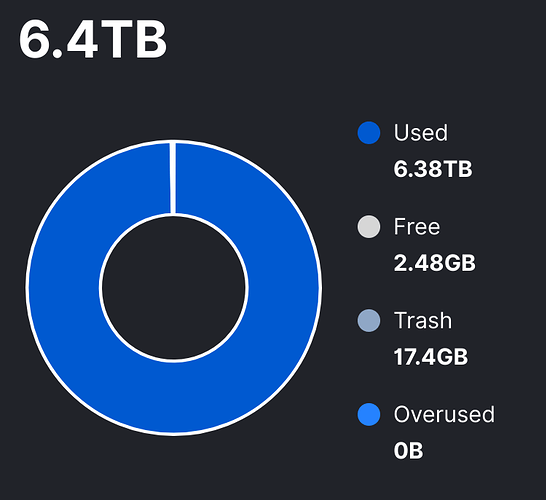 this is only 4tb node.