Linus from Linus Tech Tips just released a new video on YouTube about his data loss.
I know that this is more related to his local hardware/configuration but since he is storing TB of data, Storj could be an option for him…
Did someone ever contact him and offer a storage solution made by Storj?

…just an idea please don’t Beat me up here.

he mentioned backblaze b2 at $5/TB being too costly a value proposition for the type of data they have. I don’t think StorjDCS’ $4/TB would change that decision unless a better rate was negotiated for archival data.

For their needs they probably should have some type of physical tape backup, or amazon’s deep archive at $1/TB. But like they said it’s a nice to have and may not really be worth the price. I’m sure they could get a sponsor to donate a tape archive system though.

I remember he did mention the use of that physical tape solution. Don’t know if they really use it finally. But a YouTube channel this size could be used as advertisment for other maybe smaller costumers.
Not that I know anything about this stuff…

Ok so tape is a long story, The initial cost is quite high. Than it is slow. And last with the data size that they are dealing with would most likely require a robot to do the archiving. As a long term solution it would be viable even if done by human. As considering how much it costs to setup the project that they do an archival system worth 10K$ I think would be viable. Mabey not perfect example as I have LTo4 tape I use to store footage from drone and other content and actively backup cloud. so Yes but would take ages

Is this the incident?

After watching the video…

Regarding your first point Linus always states that they use parts of old videos for the production new ones. So that might explain it.
The mentioning about the 20 TB drives is for me just a side note.

Independent of the reasons for this video I still think it’s worth a shot for the storj marketing team to have a look into it and negotiate a suitable storage plan if possible. I mean we talk about 3 PB of data here.

He also mentioned Hetzner as a sponsor so maybe he is now willing to invest some money into that.

I use smaller radz2 vdevs. And auto-scrub every month. On the other hand, this reminds me that it has been a while since I backed up my file server to tape. Probably as good time as any to do it and finally figure out how to do incremental backups.

since I backed up my file server to tape

Obligatory link to the Council on Library & Information Resources…

Magnetic Tape Storage and Handling: A Guide for Libraries and Archives:

Saw the video and it made me cringe so much. Just like last time when they lost data on their active projects.

They basically have no precautions in place for when things go wrong. In this case they have 7 problematic drives which apparently didn’t set off any alarm bells. Last time they used RAID50 for essential data and both times they had no backups.

I mean… They are just asking for disastrous data loss across the board. It would be great if they backed up some stuff to Store, but I don’t see that happening unless it’s as like some promotional partnership.
Which would be really great, since relatively large video files is exactly what Storj is well suited for.

Storj would probably be a bit expensive for backups. As they said, the data was “nice to have” and an excuse to build big file servers. Now they get to try data recovery from zfs and then will probably monitor the disks.

They don’t have a dedicated I guy, because everyone can do the job, but that means “being an IT guy” is secondary to whatever their main jobs are. Why should A set up monitoring if B is perfectly capable of doing it and maybe has less “real work” to do? Why B, since it was C who actually set up the server, he should finish it? Why C, since it’s A who usually works with those servers?

Well sure, but would you ever set up a server with raidz2 vdevs without setting up monitoring? I would say it’s pretty clear that the person who set that up in the first place dropped the ball here. Especially considering that they knew there wouldn’t be a backup.

I can understand not having backups for some stuff btw, I have lots of non essential data that isn’t backed up other than being on a raid6 array. But I would never set that up without making damn sure I’d be informed if any disk ran into issues. And I would schedule scrubs every month. That would be a fairly simple checklist to go over before taking something into production

And yeah, I agree Storj would be too expensive. It’d only work as a promotional thing if LTT would be interested in covering Storj. Which might be a little out of their wheelhouse anyway. Though they’ve done videos on mining before, so who knows, their audience might like some info on Storj from that perspective.

Well sure, but would you ever set up a server with raidz2 vdevs without setting up monitoring?

I can imagine circumstances where this could happen, yes. Also, we have to admit that they are not professional admins. Probably nobody even though about monitoring it.

And I would schedule scrubs every month.

Newer zfs versions (at least on Debian) set a cron job to do tat automatically. I disable it on some servers (IPTV DVR servers where the data is deleted after 1-2 weeks).

I can imagine circumstances where this could happen, yes. Also, we have to admit that they are not professional admins.

Well sure, I grant you that. But if that’s the only reason I really don’t understand how after having previously had pretty disastrous effects from being so lax, that still slipped through the cracks. I tend to understand making a mistake once a lot better than repeated mistakes. I’d say by now they should have known better.

Anyway, it leads to fun videos to watch though.

it leads to fun videos to watch though.

Perhaps this is why

So, “no backup” is intendent, to make some “fun videos” about that later, when disaster is happened.

Probably one of the reasons. Another is that to them, that data is not worth the money they would have to pay for cloud backup (each month) or the initial costs of a local tape or disk based backup.

That wouldn’t surprise me and he did indeed mention the data is not worth the cost of backups. So that part I definitely understand. Just seems you would want to ensure RAID integrity at the least, because at the same time this doesn’t make them look so great, which I doubt is their intention.

To be fair, the previous failure was a lot more “exciting”. You could really see Linus sweat and snap at people. He was not doing well there. This time he was really calm and didn’t seem to care that much.

10 posts were split to a new topic: Don’t forget about Filecoin for important backups, guys 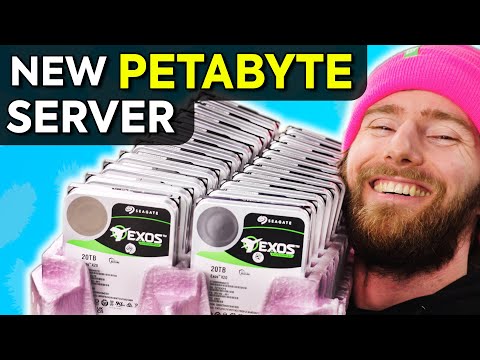 Looks like he built his replacement. They went with TrueNas this time, which I’m sure will help them set up better monitoring easily. They already mentioned scheduled monthly scrubs happen by default. Live and learn I guess