[Edit] ok, actually the surge amount displayed is not “in addition” to the earnings. The % includes the normal earnings + surge. So 100% surge means there is no surge.

Actually I have stumbled across this as well and came to the same conclusion: 100% surge is no surge at all

.
The entire display is very confusing and could be much easier, more straight forward and self explanatory. But hey, why make things easy if you can make them complicated…

Thank you for feedback. Could you please suggest a self-explanatory view?

I suggest just omitting the column if it doesn’t apply. Less is more.

The line reads as if values should be added and subtracted to get a grand total. 0% surge and $0 if there are no surge payments should be self-explanatory.

It should be:
Earned + Surge - Held = After Held
The total payout per satellite line in collapsed view should show what it says: The effective payout.
In expanded view After Held + Held returned + Distributed should result in the total payout.

If no payout was made due to high fees, Payout should read $0.00. Distributed could turn into Undistributed and show the undistributed amount as negative value so that the Total Payout would turn to $0.00 and reflect the effective payout of $0.00.

Additionally somewhere at the end of there should be the total amount over all satellite in USD + the final number of STORJ tokens that have been sent.

I have just played around with it a bit more. Markup options in this forum are limited but I am sure you get the overall idea:

And here is another idea.
Based on this is the idea to differentiate better between earnings and payouts:

Also to me it seems that once a node has reached the required age, there will never be any amounts held back again, only held backs returned.

So I think it would be a good fit, to move the held amount to the payout column. Also because held amount is only a payment, not an earning similar to distributed payout.

I don’t understand. What are you disagreeing with?

You removed the Held completely and the last variant is more confusing than was before.

The general idea was to remove some information that could be considered redundant and/or of no additional informational value.
For example: When a node has reached 16 months, then there is no held back amount anymore and never again. So I thought it’s not much of a value to keep displaying the zeros.
Same goes for the the held returned value: For the first 15 months it will be $0.00 always as held will be returned only in/after month 16. So I thought it would be better to display a “held back” when there is a held back and a “held returned” when there is actually a held returned.

Also for the percentage: When 100% payout is displayed, it might not be required to display 0% for the held back. The math behind it is so trivial, that displaying held percentage might not required ( like when payout level is 75% then held back is automatically 25%).

Yes, maybe it is more confusing, however I don’t know what exactly is confusing you. Maybe it’s how I have displayed it with all the optional values.
A finalized version could look a bit more like this (please bear in mind that markup options are limited):

Or like this for an example node which is 5 months old and did not reach payout threshold:

Of course you could display the held back percentage optionally too:

I’m with @Alexey, that looks more confusing to me. How could distributed be lower than the total payout? If payout is distributed all of it is distributed. I never liked that term to begin with as it isn’t the most clear. I could make suggestions, but I’ve basically built my suggestions in the earnings calculator. I’ve had to deal with these exact same things. And while I can’t claim it’s completely clear in the earnings calculator (it is after all a fairly complex set of mechanisms at play). I did at least attempt to make it clearer with different terminology. I’ll post some examples.

Ignore the “difference” line, as this is unique to the earnings calculator and shows where it compares the nodes own internal bookkeeping to the actual payout. 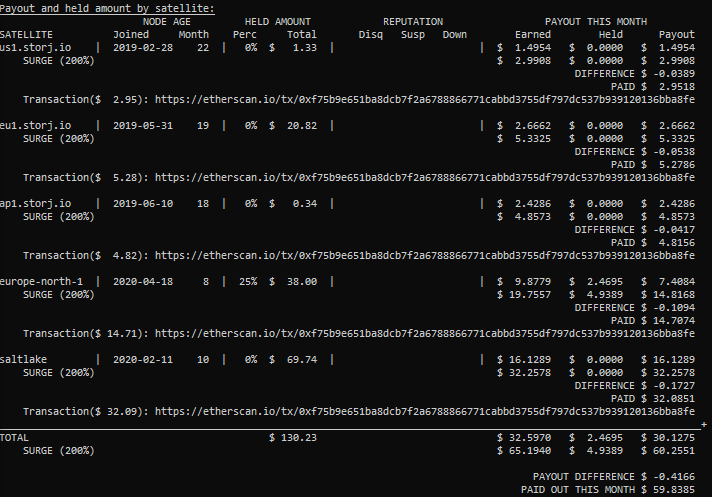 Surge is only displayed when it’s relevant.

The totals lines change names between “PAID” or “PAYOUT POSTPONED” depending on whether the earnings were actually paid out.

When payout happens after previously being postponed, additional lines for the payout for previous months are included as well as totals lines for totals paid. This screenshot also shows payout of held amount. Also lines that don’t show up unless they are relevant. 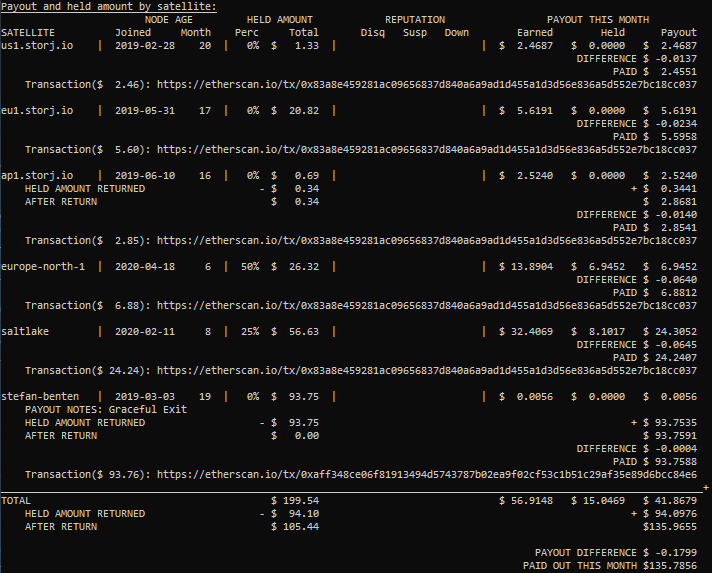 Graceful exit shows up as a note when relevant. (Other relevant notes are possible)

There are some other scenarios, but I would suggest using the calculator yourself or having a look at the code to see how it deals with those. In general I just leave out whatever isn’t relevant and use slightly different terms to make it more clear.

Honestly I have already spent more time on this than I should. I was not trying to create a full solution for every imaginable case nor was I trying to find new and better wording. But I agree with you that the current wording should also be improved.

I was about to showcase an idea where it might be easier to comprehend the figures and how they add up to get the results for earnings and payouts. That’s also why you see the distributed amount is lower than actual payout. It is only the previously undistributed amount that gets distributed in the current period (Payout = Earnings + Surge - Held back + Held returned + Distributed). I still believe something like this is easier to comprehend.
But again: I am just passing ideas, not a full solution. That’s someone else’s job.