You still fail to give us real numbers. What are we supposed to do with “hugely more TB/h in march”?

BTW its TB*h and not TB/h. It’s a big difference.

Was pleased with my previous payouts, but this month would question the worth of the disk wear / power etc.

It has always been said, don’t run a server solely for storagenode. Use a server which runs anyway and has spare hard disk space.

Maybe your held amount is not 25% and rather 50%? What does the “FIRST CONTACT” column say for each satellite in the earnings.py?

The problem is that since V.1.1.1 update there’s no data befero April!
I am having issues with that… And my storagenode started in december!

Me too I find the payment of March very low compared to what I had to have according to my data downloas and upload. I realize that ultimately it is not at all profitable to let a node turn. I know no one who lets his pc run 24/7 for fun. if we count the wear and the electricity, we are in loss.
the only people who can are those who have servers running or laos des Nas nothing more.

for each month in question and compare your payout with caculations. FYI - the surge pricing is over, but we have a one-time surge pricing for the March:

I made this calculator to provide payout information and be used as an extension of the dashboard functionality already provided by Storj. Storj Earnings Calculator Earnings calculation script for Storj V3 storagenodes Prerequisites Python is required to run this script. This script was tested on Windows 10 and Linux, with Python 3.7. Other OS’s and versions will likely also work. Warning If you are running Docker on Windows or MacOS, stop the node, copy the bandwidth.db, storage_usage.db, p…

please explain to me then the payment from my data from March, Thank you! because I don’t understand at all 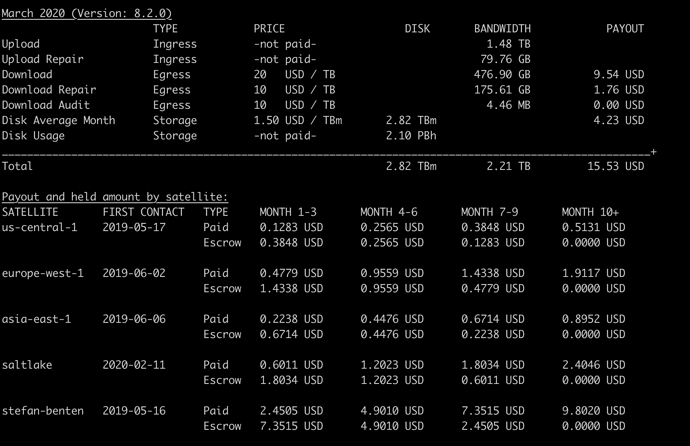 Please, click on each transaction and write down the sum in $$ on date of payout (click on it for that).
From your report:
Your node is old for almost all satellites, so you can take a calculated amount from the MONTH 10+ column for all satellites but saltlake.
For Saltlake it is two months old, so the column “MONTH 1-3”
Wallets of satellites you can take from there

Thank you for the information but I don’t see any correspondence with my March payment table from earning.py

And you are complaining about low payment? Some people…

The problem is that since V.1.1.1 update there’s no data befero April!

Unless you redirect log messages to a file, it will be lost when you restart the node. The earnings calculator and the dashboard doesn’t need the logs though, it’s all stored in the database.

Well something happen … maybe somebody can clear it … like what happen different since last month payment ? i got half payment to … TB*h was bigger Ingress and Egress bigger then previous month … i always get bigger payment with every month … my node is old so i dont see a reason why payment should be less since bandwidth and disk space used never goes down just up … so payment usually only gets bigger ( if no BIG BONUS in previous months ) … so … what happen this month ? whats new ? what changed ? Dont answer with “Please, run the calculator” … i`m sure you know something changed !!! Better explain what so people can understand …

here is february and march screenshot … march payment was 50% lower … half … ??? 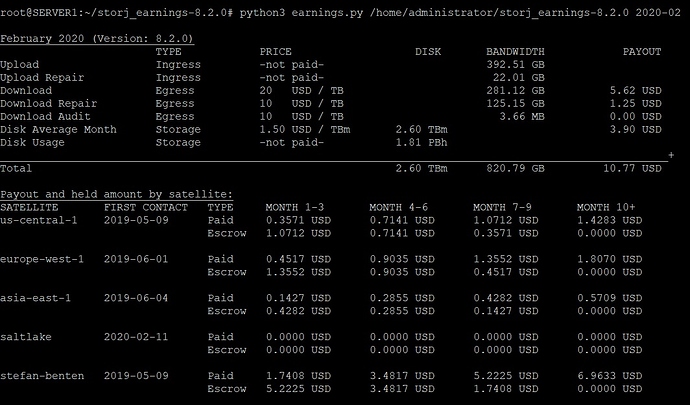 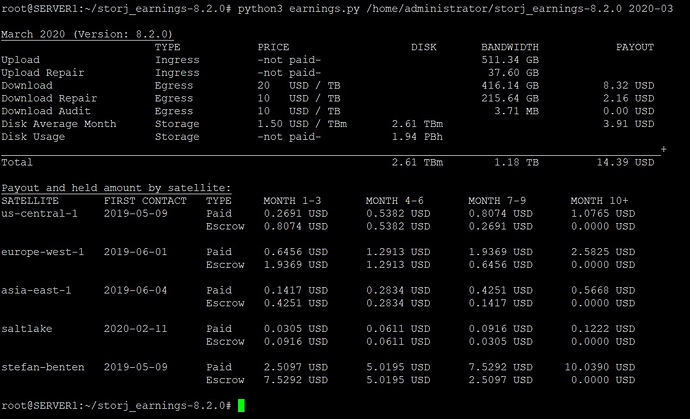 January was an exceptional good month and February’s payout included the last week of January. Without the real numbers nobody will be able to help you. “multiple TB’s of data in/exgress” doesn’t mean anything as ingress is not paid. In what month is your node for each satellite? How many TB*h did your node store? How much egress bandwith did it use? You can use the earnings calculator https://forum.storj.io/t/earnings-calculator-update-2020-04-10-v8-2-0-price-and-month-estimate to check. It’s…

Those number looks quite good imo.

Long story short, nodes on low capacity drives won’t break even on live stored data, cold storage or whatever its called… but with high egress they may payoff all the hardware and expenses in a single month in theory xD

ofc if one is running a small system, and we just look at the basics… 1.5$ pr TBm for storage
that means that even 1TB hdd which uses less than 10watts for regular 7200rpm drives anyways.
my local costs for 10watts running for a month comes out to about 2.2$
meaning if i run a 1TB drive, and assume only “cold storage” then it requires egress to break even.

so with a 2TB drive the math is about the same, just double the capacity, and thus something like 2x1.5$ = 3$ and then you need to add internet costs, server electricity, hardware costs/wear

so really in any small node you are at the mercy of the egress profits, the TBm basically covers keeping a 2TB drive running and wear and tear on it or something like that…

ofc that is grossly unrealistic, i mean a 2TB node on a 50mbit internet connection running of a RPI is worth less than that, so it wouldn’t make much sense… but in theory it could happen.

assume that you are getting data mostly for long term storage, and then be pleasantly surprised…

March for me was one of the highest paid that I have seen, Im honestly grateful to be apart of this project. When I expect im getting less then I am I get a great suprise, payout fell on my birthday so I was even happier. One thing that helps is I don’t ever check how much I will be getting per month so when I see money getting put in my wallet it makes doing this so much better.
It also helps that I am pretty much zero dollars invested in this so I don’t have high expectations.

Found this post, this guy won the egress lottery.
might just be a test artifact tho, but who knows… it happened.

applying his stored data to egress ratio of 1 to 3 on to my previous example.
would mean over 120$ in a month for a full 2TB node with 50mbit internet connection
the earning calc is on his post.

i also doubt this would happen much for larger nodes, he had basically no data, so…

@deathlessdd yeah i ran a v2 for a couple of months or 3 and then started my v3 5 weeks ago, i basically doesn’t care or can even hope to make a profit on it for a good while still…
my system eats like 500watts, so going to need a good stack of drives to negate that.

my system eats like 500watts, so going to need a good stack of drives to negate that.

How do you set up a system that eats 500Watts and only run STORJ? Sounds only possible with either really old hardware or you are running a GPU for mining, in which case you can’t expect STORJ to pay for that electricity

I have a self-built homeserver running multiple stuff and it eats <70W with 4 HDDs connected.