More Than 1 Node Under Same Subnet?

Would it make good sense to run more than 1 nodes in the same network with different static IPs? Is node activity location specific? Running 1 node already and the activity is very very low. Does VPN make sense to make the network believe the node is in another location where there is more activity/profit?

1 Node just started. How long did it take you to get actual activity? 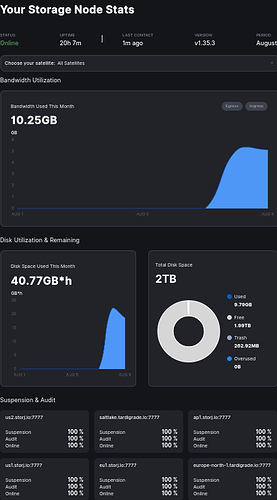 Running 1 node already and the activity is very very low.

Any new node must be vetted, it can receive only 5% of potential traffic until got vetted. To be vetted on one satellite it should pass 100 audits for it. For the one node it should take at least a month. Also, space and bandwidth are used by real people, not machines. There is no predictable traffic or usage.

Traffic after the node has been vetted is higher, but do not expect too much as the general adoption / usage is low resp. depends on real customer data up- and downloads. So as long as Storj adoption is low, usage on storage will be low.

Does VPN make sense to make the network believe the node is in another location where there is more activity/profit?

Too many nodes at one IP address? FAQ

There are probably many more nodes on the network since then. Also all nodes on the same /24 subnet are treated as 1 node.

If you have different subnet IPs then it would work. But still ever new node undergoes vetting. There is nothing you can do to change that.

OK. Thanks! I’ve did some research and saw some VPN setups I am not interested into and would like to try adding more nodes with different IP from the same network as it will also be on another machine. Did not really know that much about the vetting. Would check it. Hope my contribution counts! Cheers!