My stats show 0B

I used to have my node on a ThinkerBoard running in docker with stroj-data on a shared NFS connected NAS. The Thinkerboard ofter overheated and rebooted, so I took all docker-files and moved them to a more powerful computer.
Created the NFS mount. And started the docker container.
It all spun up and all looks good.
But the stats always show 0B.
Bandwidth 0B, Disk space used tis month 0B
However I see the Used disk space increase, now at 0.99TB (at the time of move 0.45Tb)

What could be wrong? How can I get the stats back? 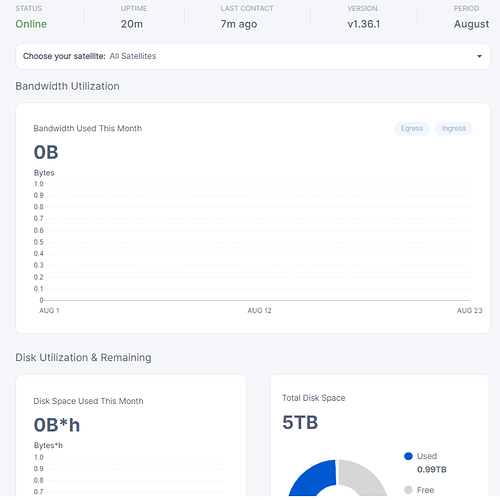 Hello @magpern ,
Welcome to the forum!

The network filesystems (NFS, SMB, sshFS, etc.) are not supported and not recommended.
The only supported network protocol for storage is iSCSI.
Use the local attached drives (via SATA, SAS, etc.) where is possible.

But, if we for a second ignore the NFS part. The NFS share is mounted on the host and to the docker container, it is a mount point like any other. It’s not the NFS that is the problem.
It worked fine on the TinkerBoard. All stats where there on the TinkerBoard.

The move of all docker files and restart on a new host, that is when the stats all show 0B, but disk is working like crazy.

The logfile doesn’t say much. When the docker container starts, there is som error that some files cannot be removed, because they don’t exist. But it continues, and a few seconds later it starts up/downloading files.

Is there any tools for sanity check? Any repair tools? What could make the stats not update, but the used disk space updates.

And, I will look into creating an iSCSI instead. Any idea how to move files from existing NFS to iSCSI?

But, if we for a second ignore the NFS part. The NFS share is mounted on the host and to the docker container, it is a mount point like any other. It’s not the NFS that is the problem.

It’s the NFS problem. These network filesystems designed not like the local filesystems, especially how they handle locks.
You can check yourself - you can search in logs “upload started” but never finished. This is exactly because storagenode is unable to lock files as it should be.
Just replace your NFS to iSCSI and you will see a difference. The better option is to run on the host in the docker container - it’s isolated enough to do not break your system, especially if you run it in root-less mode.

Okey! Unfortunately I cannot run on the host, the NAS is a network NAS (Xytel) without docker support.
But it supports iSCSI.
Is it just to copy all files from the NFS to a iSCSI target? Then re-direct docker?

Perhaps you can run a binary version, if you can ssh to it.
I didn’t found much about Xytel NAS, so not aware what is hardware and software they uses.

Is it just to copy all files from the NFS to a iSCSI target? Then re-direct docker?

Then move data and update your docker run command and run it.

After spending many many days copying to a iSCSI disk, my stats are back! And NAS is much more quiet!