Node dashboard is showing no ingress over the last 4 days, online score had dropped to 71.1% after my previous error involving DNS the other day. But this shouldn’t affect the node getting new traffic would it? I’m still seeing “GET’s” in the logs.

You can ignore the warn message. Satellite 118UWpMCHzs6CvSgWd9BfFVjw5K9pZbJjkfZJexMtSkmKxvvAW was retired a long time ago.

As for the ingress, what version are you running?

The 71% you see on the dashboard could be outdate. Maybe you have been suspended (or disqualified)? If you restart your node it should request updated numbers from each satellite within a few minutes. 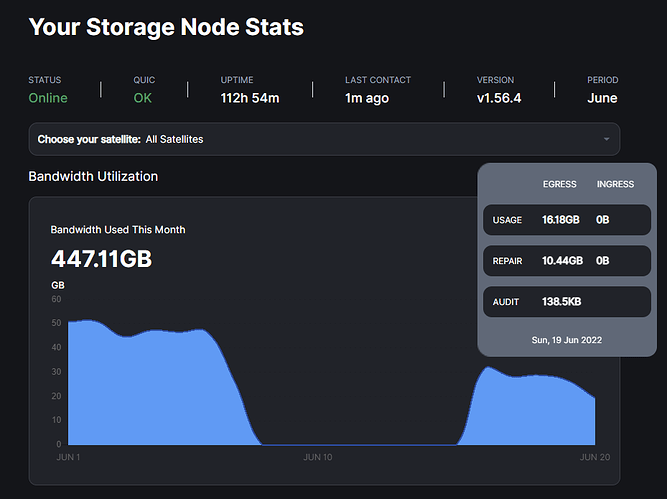 Still above suspension/disqualification thresholds AFAIK though they’ve not budged the last few days… (not better, but not worse) I think it’s averaged over the last 60-day period so might take a few more days to bring down the 7-day outage

Was that the stefan-benten test satellite?

Could your node be full?

Would you call this full? 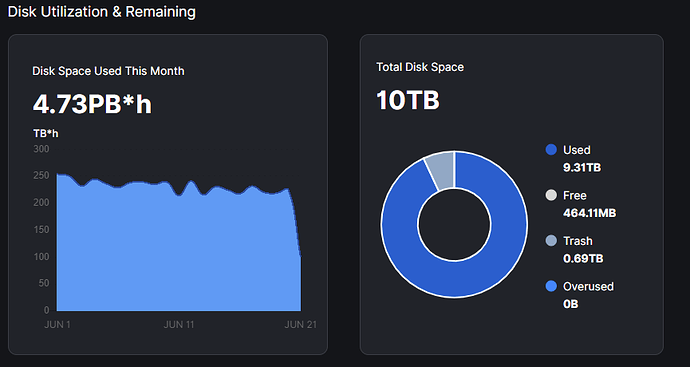 Yes I would call that full and that explains why you don’t get any uploads.

I think that huge trash is because of your long offline.
The satellites may have had to repair some blocks and you have been left out.
Once the trash expires in a few days your node will start to fill again.
The new data seems to include lots of deletes so that 600G could last some months.
Time to start a second node?

Was that the stefan-benten test satellite?