Node suspended on us2 and europe-north-1

Got this message today on the dashboard

This has been running all day, no failure messages

I have Uptime Kuma running in GCP hitting both the IP:port and DNS:port, it has not failed a ping.

RAM seems to be spiraling out of control 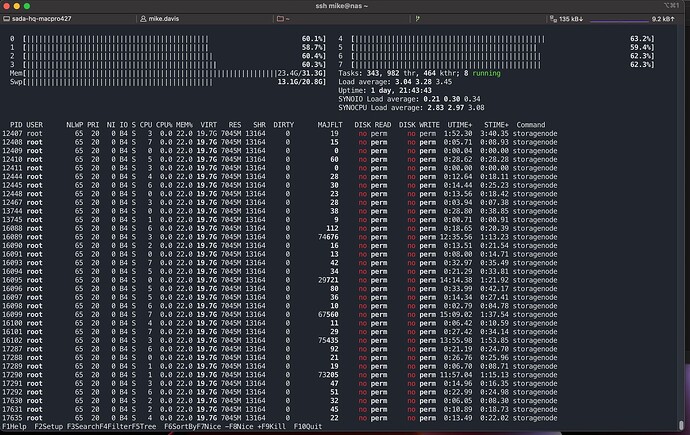 I don’t know what’s wrong but my gut reaction would be to fully shutdown and restart the node.

You could grep the logs for ERROR lines first. Audits seem fine as they’re at 100%.

Yeah, that’s been the temporary fix the last two times. The problem is docker stop storagenode does nothing, it just doesn’t respond. Sometimes need to hard boot the box which has it’s dangers also.

@brandon could this be related to the audits being turned on for us2 and europe-north-1 ?

@mi5key could you post as much of the docker logs as you can so we can see what’s going on.

Memory is is at 1.6GB and rising after a full restart.

Anything from anyone at storj?

Certainly if you are using SMR drives, that may be an issue since they can perform slow writes which causes your cache to fill up and would explain your high memory condition.

Of course, there are many different configurations of nodes, so it’s difficult to guess what might be causing your issue. Have you made any changes to it lately?

These are non SMR drives in a Synology NAS. No issues for years until recently. Docker is current and no updates, No DSM updates within the last 3 months, not sure when the last Storj update was.

Seriously looking at downgrading to an earlier version of storj if that’s even possible.

Well I know @BrightSilence runs at least some of his nodes on Synology NAS hardware. So, he might be able to help you troubleshoot this.

I don’t recognize this issue. Not seeing it on my nodes. But then not all Synology NAS’s are the same.

@mi5key are you on DSM7 yet? If so, you can now see IO wait in the resource monitor on the CPU tab. I’m guessing it’s high. (this is usually the cause of high memory usage)

Either way, I’d need to know some more info to see what bottlenecks may be.
Which model NAS do you have?
How much memory does it have now (have you upgraded it)?
How many HDD’s and what kind of array?
Are you certain none of them are SMR? (unfortunately HDD manufacturers used to hide this for a long time and it’s still frequently only shown on spec sheets)
Do you use SSD cache, if so is it read/write?
How many nodes do you run on the system?

could this be related to the audits being turned on for us2 and europe-north-1 ?

It would speed up the drop in score, but I doubt it has an impact on performance, seeing the increased RAM usage suggests this is probably an unrelated issue. I’m not seeing this on any of my nodes. So I’m pretty certain the answer is no.

The problem is docker stop storagenode does nothing, it just doesn’t respond. Sometimes need to hard boot the box which has it’s dangers also.

Looks like your Synology have problems with high RAM usage, or your disk is dying.

Seriously looking at downgrading to an earlier version of storj if that’s even possible.

This likely will not help. If your node just hanging, there are hardware issues, either with storage or with RAM.

This is a DS1821+, eight 8TB drives, WD and Seagate Ironwolf, no SMR, I’m 99% sure, did a lot of research before picking these drives, 32GB of RAM (not Synology approved, but it’s been installed for 3 years now).

Docker stats shows process ram at 2.9GB, it was ~5GB earlier so it has gone down after the restart. Not sure what it normally was as I’ve never watched it this long to know the ‘normal’ baseline.

All disks including ssd are reporting good.

This is too high for the storagenode, I suspect that your storage is pretty slow. This could be indication of problems with at least a one disk.
I would recommend to check disks via S.M.A.R.T.

But these nodes works on separate disks, no array, this is a Windows docker desktop, so it also a Linux VM.

storj is the only part of the node that is hanging. Everything else is operating normally. The other 4 containers work great. They respond immediately to logs request.

I can exec a bash shell into the storagenode container just fine, it responds immediately.

storj is the only part of the node that is hanging. Everything else is operating normally.

because storagenode uses your storage unlike anything other. The container itself is not the reason. If your storage is slow, then storagenode will use more RAM to buffer uploads to your node, because the disk is not able to keep up.

and again I’m talking not about how much free space on your disk, the disk is slow to respond/store data. Perhaps reads too, because it leads to low suspension score, so you definitely have issues with audits, you may search for exact errors:

So please, check your disks first. I meant with fsck (or with UI analogue on your Synology - here I’m not sure how to do it on Synology), then S.M.A.R.T. with tools available for Synology.

This is the same setup that I have been running for about 2 years. No recent changes. No bigger demands on the box.

Just ran SMART on the WDs and IronWolf Health on the Seagates. All came back fine. 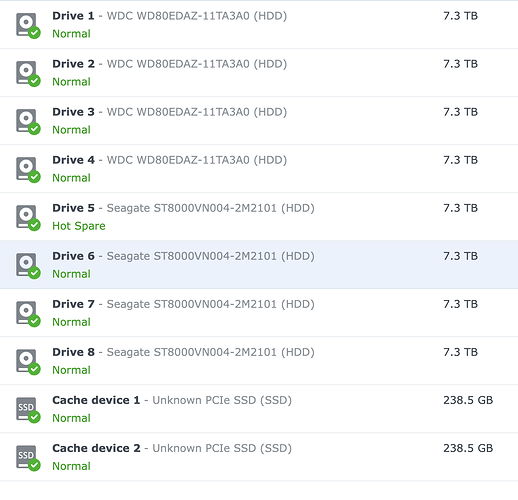 I’m going to look into offloading the docker logs to the array and see if anything shows up in there.

I whould stopnode and rm all of them, just to clear the logs. Then I’ll start them with Filewalker off (see the topic Tuning the Filewalker), to see if the FW is the culprit. You will see high I/O from the garbage colector, but for a short period. Also, I whould set loglevel=error to keep logs at a manageble size.
Other things to consider on Synology:

Activate the Performance history to see how resources are used after restart.
Restart the Diskstation, manual update the nodes, than start the nodes.
Also, I see you use SSDs for cache, maybe they are the problem? BrightSilence had a nasty surprise with them.
Also… Docker is reporting wrong memory usage; I think it shows also the cache used, not just the used memory.
You should see the true usage in Performance tab, after running the nodes for 12 hours.