I’ve got a node sharing a 4TB disk but only as 3.24TB… It is almost at it’s limit but it is still function perfectly. However, this morning I’ve noticed that my online % has dropped below 94% on all nodes. As I said it is almost at it’s 3.24T limit and is only reporting just under 500MB as free and 16GB as trash. Here is what it looks like: 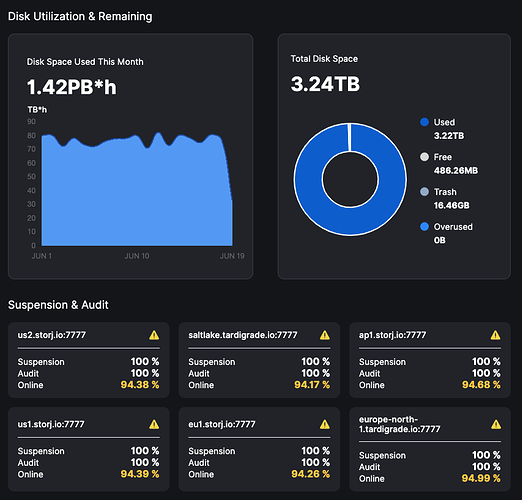 BTW, is there anyway for me to reclaim some of the trash being reported?

Is this expected that the online % should drop because of the amount of space remaining?

Online score is not related to the amount of available space.
When it drops, it means that for some reasons your node could not be reached by satellites for some amount of time during the last 30 days. It could be a problem on your end, or out of your control like your ISP. If they keep dropping though, you’ll have to have a look at your node’s logs to try to figure out what’s wrong.
If it was a temporary issue, numbers should stay stable for a while and get back close to 100% within 30ish days.

BTW, is there anyway for me to reclaim some of the trash being reported?

Data put in the trash is automatically deleted after 7 days, and becomes free space for the node to store future incoming data. If you would like this space back for your own usage, then you should reconfigure your node so it has less space available (3240GB minus 16GB in your case, that would be 3224GB), in which case the space taken up by the trash should get freed within 7 days.

Thx, I’ll monitor over the next few days. As I said it just dropped today to the point where it is yellow. Prior to that it was ok.