Every time I open up this forum I am unable to interact with the page at all until I do CTRL+F5.

For some reason the preloader is covering the whole page. 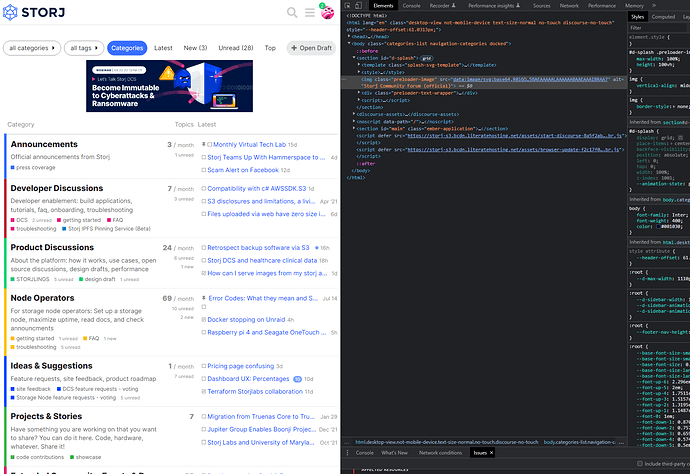 It looks like the for the preloader is being blocked by Chrome.

I can’t replicate this. Can you identify what it’s trying to load that is getting blocked?

What browser are you using?

Does the problem go away if you access https://forum.storj.io/?safe_mode=no_themes ?

@bre have you experienced this issue or had other reports?

The pageloader contains an inline script which is what gets blocked from running. 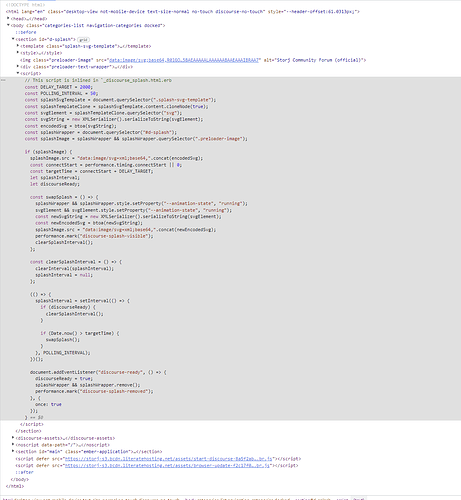 Using safemode fixes the problem. The whole section for the pageloader is not there when using safemode.

Did you install this as an App in Chrome? That’s likely the issue. The Content Security Policy for Chrome Apps is causing this. Chrome has stopped support for Chrome Apps

NOTE: The timeline has been updated, please see our October 2021 post for more details. In January 2020, we announced that we are expandin...

That all being said, it’s better to not use inline javascript and instead reference the script as a separate file to avoid these kinds of things.

Did you install this as an App in Chrome?

This is in Discourse Core, so it’s nothing about this site. Since Chrome Apps are going away, I suspect that the Discourse developers don’t care much about supporting them. That said, this loader is a new feature and it’s a good bet that they intend to move that code to a script Real Soon Now (unless there is some reason not to?). That’s the kind of thing that they are generally quite careful about, so I suspect that either there is some reason that they are doing that (like after the site loads that gets removed?) or it’s a placeholder while they tweak other things about the feature.

I haven’t installed it as a chrome app. I did just go into the apps chrome://apps and removed JamStash, and the website now works fine… Not entirely sure if removing that was related since I didn’t try the site immediately before removing it today.

For now at least it appears to be fixed.

It’s not caused by anything on your site, so it’s in Discourse core. I haven’t seen any similar reports on meta.discourse.org, so my guess is that JamStash was the issue, however unlikely that may seem.

Thank you for getting to the bottom of this weird one