I am a Storage Node Operator since Dec. 2019 and the first payout was low as expected since i had just a few day as Node Operator.

January and February, i received prety good payouts on the order of 200+ Storj being the month of February, the best month.

I increased the space to 3Tb for March and now i just received roughly 90Storj with more space and bandwidth and this happened since the update to 1.1.1, and i am also having the same problem as others:

Payout Information: It only states that my Node is only just for the Month of April not counting the Dec. Jan. Feb and March.

Can anyone tell me if the is any problem with the calculation of the node since V1.1.1 and/Or regarding the payouts.

Many thanks for your help about this !

Hello @ColdSpirit,
Welcome to the forum!

Have you received all payouts? Each satellite is paying for itself to each node independently. So, you should receive 5 transactions.

The payout information on dashboard is not totally correct:

In the works: Awesome updates to the SNO Dashboard! [April2020] Node Operators

Sorry but I have to step in an crash the party. This is what you currently get: [payout] On the left side you see the payout combined for all satellites. The green part should be accurate. On the right side you see the same page but now I selected the us satellite. It is still showing the total payout for all satellites. Only the green parts are changing depending on which satellite I am selecting and it looks like these values could be correct. → The satellite selector is confusing right no…

So, you can use a Earning calculator instead:

In february I got: 477, there was a 2x surge if I remember correctly and 15 days payment becouse of automatic payouts launch. On march + 15 days of february I got 518 with no surge payout. And this month I got 204.

So everything is fine.

Actually there is a 2.5x surge payout for March

So, yes, i received the all 5 transactions. 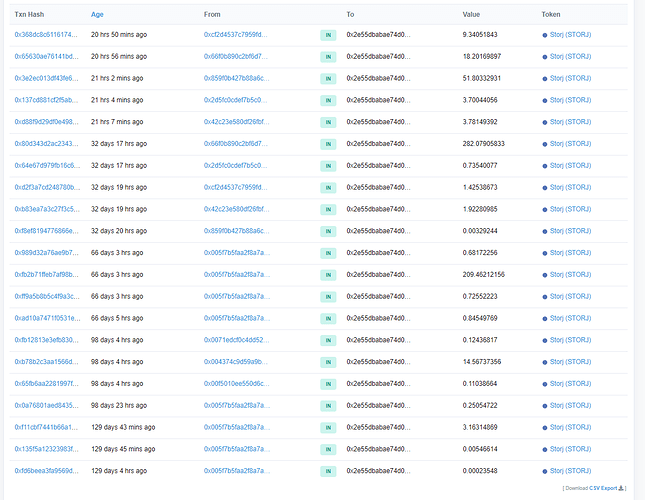 I just want to make sure this is correct.

I started with 1Tb… on the first 2 months (last couple day of december, and full month of January)
Then i raised to 2Tb on February. In March i raised to 3Tb.

The payments were according to the screenshot.

Regarding the dashboard what about the information for previous months? And regarding the held ammount?
Also, is this month transactioning as if it is my first month as Node Operator?

Many thanks for the answer in advance.

I have the same problem…

Over 300 storj in jan, over 560 storj in feb…and just 60 in march…Even though march had massively more traffic and space used…

I have received all 5 payments…what is going on?

Please, check your payments with calculator and compare with what you received.

My current stats using the “earnings calculator”. although something seems off on the calculator and on what i received. 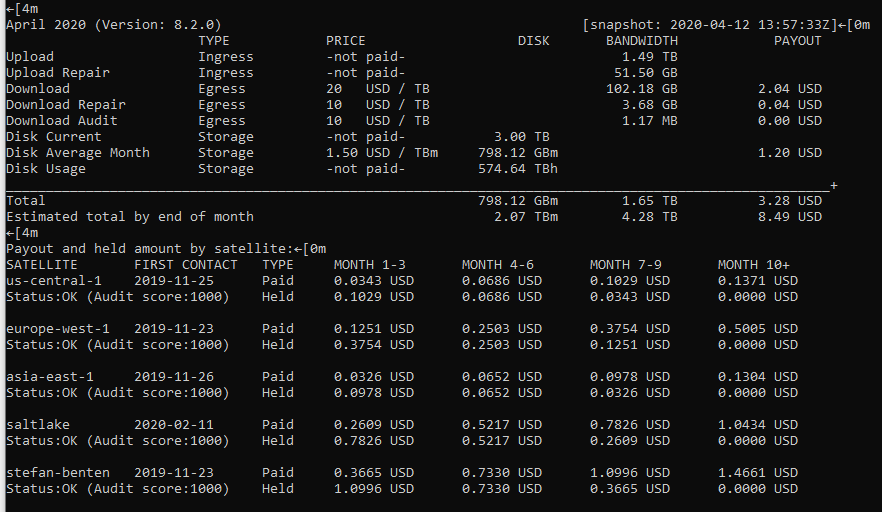 Hey @donald.m.motsinger, finally figured it out =) ! 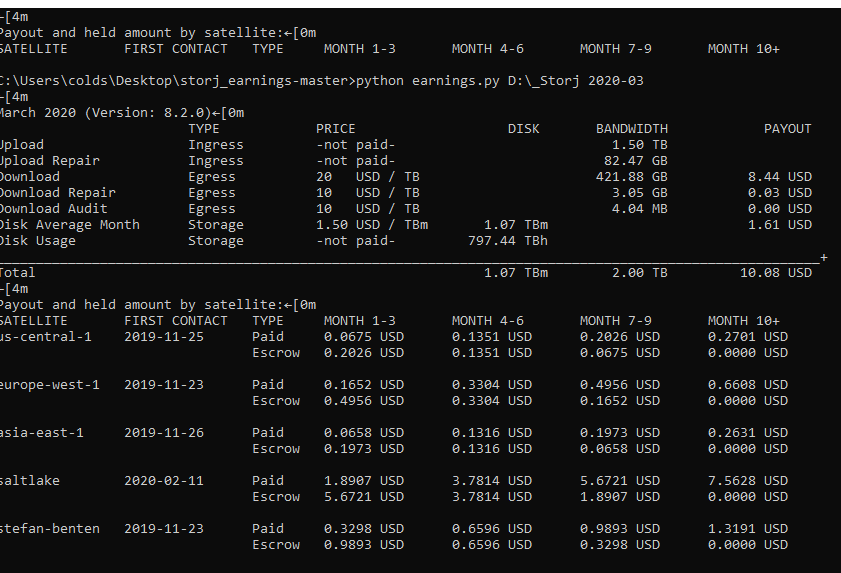 Also i just saw on the screen that it just shows 1.07TBm
I had available 3Tb full month. Half month 1.5/6Tb full and the other half almost full…

Many thanks in advance for the help understanding =) !

We uses measure unit as GB*h for a reason. You can take it as kW*h for the electricity.
If customer stored 1GB for a 2 hours it would be 2 GB*h. For a month 720 GB*h.
If customer will delete their data, it will not be accounted as used since that.
We collect the total usage information and then divide it to the number of hours in the current month, roughly 720 hours. After that you will get a number of TBm.

You don’t get paid for “available” Storage, only for actual stored data and egress traffic.

Looking at your numbers I can see that you are in month 1-3 for saltlake and month 4-6 for all other satellites. Adding up all “paid” values in the right column gives you $3.1474. Since there was a surge payment of 2.5x you should have received $7.8685. If you click on the Txn Hash of each payment, you will see the USD value for each payment. Add it together and you should get close to $7.8685.

People, please stop complaining about supposedly lower payments than the months before. January was an exceptional good month due to a lot of testing and surge payout and February’s payment included the last week of January. You can’t assume that every month will have a higher payout than the previous month. If there is less download of data, which accounts for most of the payment, then you will get paid less. 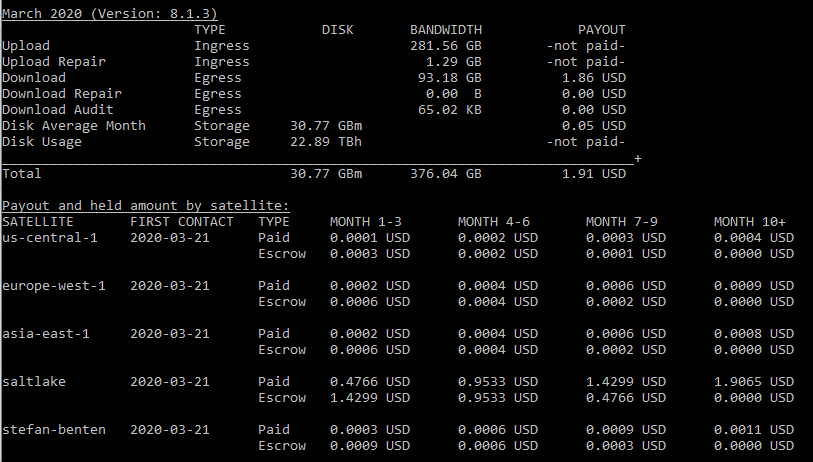 Since your node is new, you should take column MONTH 1-3 in your calculation

Since there was a surge payment of 2.5x

you should multiple the value to 2.5
Then

If you click on the Txn Hash of each payment, you will see the USD value for each payment.

Write them down and compare

@cy2k somebody won the egress lottery… lol 30GBm on your node and 93GB egress for that month…
doubt that will happen for larger data sets tho… luck of the draw in a small sample size.

In all my testing the amounts are spot on. The same with most screenshots posted on here. (almost all of the examples of SNOs thinking they got the wrong amount turn out to be some misunderstanding.)

@cy2k It might be worth comparing against the web dashboard, though you can only do that for the current month right now. But you’ll see matching numbers between the web dashboard and the earnings calculator for bandwidth usage.

The egress may seem unusually high, but this is a node that likely wasn’t vetted for most of the month on all but the saltlake satellite and that satellite has done some download testing. Additionally by the end of the month there was likely much more than 30GB stored as there was quite a bit of upload throughout the month.