Yesterday I checked out Storj for the first time because someone asked if HashBackup (I’m the author) supported it. I had never heard of it so did some poking around.

The only pricing page I saw is this one: 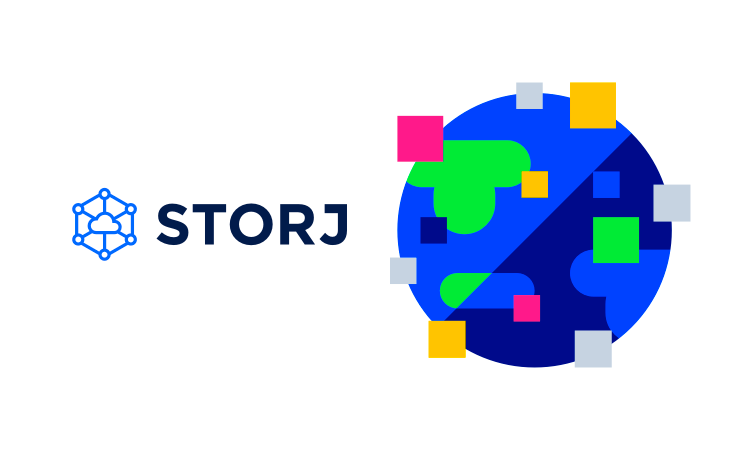 Now you can enjoy affordable cloud storage, that's save, secure, and private without breaking the bank, with Storj DCS.

It says storage is $4/TB/mo and egress (I’m guessing) is $7/TB/mo. Because of this I assumed StorJ used “per-TB” pricing, somewhat like Wasabi’s $5.99 minimum/mo, so the minimum would be $11/mo on StorJ. I didn’t see anywhere on that page that the actual billing is done by GB-hr. The guy I was talking to said it was buried in a TOS graphic that he sent to me.

Suggest you add a note right beneath the TB pricing on the pricing page, like:

Adding a link to the documentation for others.

How Billing is Calculated

Thanks! A link to this on the pricing page would be nice. When I saw the pricing page, I just assumed it was rounded up, per-TB pricing and wouldn’t have gone looking for how billing was actually computed. In fact, when I was talking to the guy who asked me about Storj, I told him it wouldn’t work for me because I have a small 55GB backup (dev server) and B2 is way cheaper because of the per-TB pricing. Turns out that’s not true.

Even adding something like “No minimum monthly pricing” or “Only pay for what you use” would be helpful?

Edit - I previously wasn’t aware of this from the @nerdatwork link:

Unlike other cloud object storage vendors, we don’t use high egress fees to create vendor lock-in. If you discover that Storj DCS isn’t a fit for your project or application and you transfer your data to another service, use our support portal to submit a ticket and let us know. As long as you follow the process, we won’t charge you for that egress bandwidth.

Interesting. I wasn’t aware of that.
Together with this suggestion, this could make a killer argument for marketing to get new customers on board.

Hey everyone, thank you for the feedback; our marketing team is going to look into updating our pricing page so that it’s more clear!

Hi all!
Newcomer here.
Sorry to revive such an old topic, but I find the pricing page is still confusing. 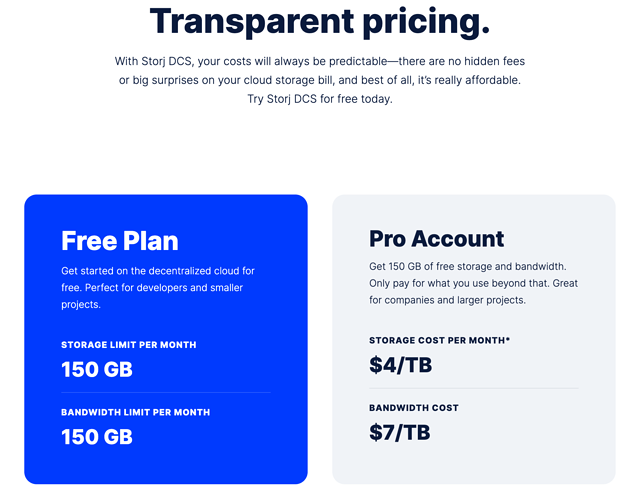 …with the price listed per TB, made me think it would cost a minimum of $4/month to own a Pro Account.

(I get that there is nominal overhead associated with encryption and such. Just leaving those out to make sure I understand the basics of pricing)

Yes. There would be egress charges as well if you downloaded data.

I get that there is nominal overhead associated with encryption and such. Just leaving those out to make sure I understand the basics of pricing

It’s negligible, to be statistically insignificant at almost any data size.

I’m still only a free tier user so don’t know the answer to this. However I have a follow-up question for others - as part of the free account could I store 50GB and then use 200GB of egress and that still wouldn’t exceed the free allowance as it’s provided by a single credit ($1.65) on the monthly invoices?

Yes, the only difference is there is a payment method linked to the account. Also once the payment method is in place the storage and egress limits are increased from the free account level.

I’m still only a free tier user so don’t know the answer to this. However I have a follow-up question for others - as part of the free account could I store 50GB and then use 200GB of egress and that still wouldn’t exceed the free allowance as it’s provided by a single credit ($1.65) on the monthly invoices?

I believe both statements are correct. You’ll only be charged for what you used… with I guess a minimum of $0.01, though perhaps there is a lower limit for when they start to actually charge your card as I’m pretty sure at that amount the transaction is more expensive than the value of the transaction. I guess it would depend on the payment provider they use, but usually there’s a starting cost to charge someone.

So it would make sense if they waited until you racked up at least, say $1 of costs and just roll the balance over to the next month as long as you are below it.

@Stob I believe you are right about the credit, but new free accounts will have an egress limit of 150GB, making going over it impossible. However, I think this is still how the credit works on pro accounts as well. Maybe someone from Storj can confirm. Technically you get $1.65 to spend before being charged. Meaning you could store more and use no egress and still be within the free limit. I can’t confirm it myself yet as I use less than 100GB atm. But I’m using it for static backups mostly, so if I do go over 150GB, I might benefit from that.

@BrightSilence is absolutely correct for both cases.
We uses Stripe for CC, so there is a minimum charge, and while your debts amount below this minimum level, they will be rolled out to the next month(s), until the sum would be enough to charge your CC. If you would have money on your balance (you use STORJ tokens as a payment method), the debts will be covered by coupons, then by your balance, then charge a CC.

as part of the free account could I store 50GB and then use 200GB of egress and that still wouldn’t exceed the free allowance as it’s provided by a single credit ($1.65) on the monthly invoices?

You can distribute a usage between storage and egress within the Free Tier (it’s just a coupon on $1.65, which is applied during invoicing), but you need to have a higher limits, than a Free Tier limits, so such disbalance is actually possible only on paid account (you will still have a Free Tier coupon though).