Yeah, I’m just pointing to a thread with some discussion on this topic. If you want to continue this discussion, it would be best to do so in that thread.

The Storage costs for data make sense 4$ cost for the customer, 1.5$ in income for us and 2.5$ for Storj

Unfortunately no. In order to get data durability and repair capability, there is an inflation factor of about 2.7x. So for every TB stored Storj pays out just over $4. They still take a loss, though a slight one. However, with storage income Storj Labs also has to compensate for expensive repair processes. So the actual loss on data stored is fairly significant as well.

This is not uncommon for startups, but at some point it will have to change.

As for the egress, at the moment the estimator assume every piece of data has an equal chance of being downloaded. But we’ve seen that recently uploaded data is usually downloaded at a higher rate than older data. So for younger nodes, it may underestimate egress a little. The same goes for deletes, recently uploaded data had a higher chance to be deleted than older data. The older your node gets, the better it will fit the model.

So… this has been bothering me for a while. I recently started 2 new nodes to check the vetting progress for the earnings calculator. But that also gave me data of nodes with ingress, but no previous storage. This allowed me to better quantify the impact of recently uploaded data on egress and deletes. Using this information I have now significantly updated the estimator to keep in mind the rate of egress and deletes on recently uploaded data (only customer uploads, repair uploads do not impact this). I also took some time to replace the ranges with variable names so the formulas are a lot easier to read. Unfortunately when copying the sheet to the public version it prefixed the sheet name to all variables which broke the highlighting. I haven’t yet found a way to fix that, so it is what it is for now.

I think the first few months now look a LOT more realistic when comparing to my new nodes. Hopefully this will be a little more encouraging for prospective node operators as well. 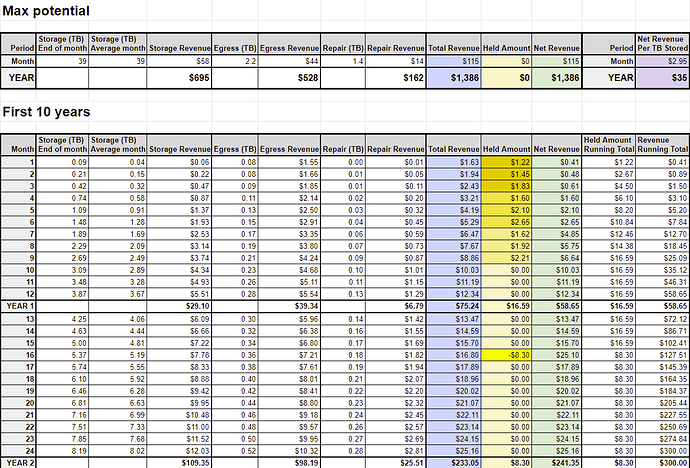 Note: The old version is available in a different tab for reference. At some point I will remove that, but for now you can use it to compare old and new. As always, I would appreciate any feedback!

How do you edit the earnings estimator?

There are links in the top post. You can fill in your inputs on the shared sheet. If you want to make other changes you need to save it to your own google account.

I don’t know how I can save the file in my google account. No button or save appears.

Someone else just made edits, so they are definitely editable. You can make a copy in the file menu, but I think you need to log in to your google account first.

I was able to open it. Open from google docs.

Is it better to have one or two nodes on the same ip?

Once the two nodes have been audited.

Would they be filled in the same amount having a single node or two nodes?

Yes, there would effectively be no difference. The estimator effectively shows you the performance of a single ip (technically per /24 IP range). Though each node adds some overhead, so it’s always best to follow the advise of one node per HDD.

2 posts were merged into an existing topic: Can I create a second node behind the same public IP address with a new Auth Token?