Version v1.67 deployed on QA Satellite and available for tests 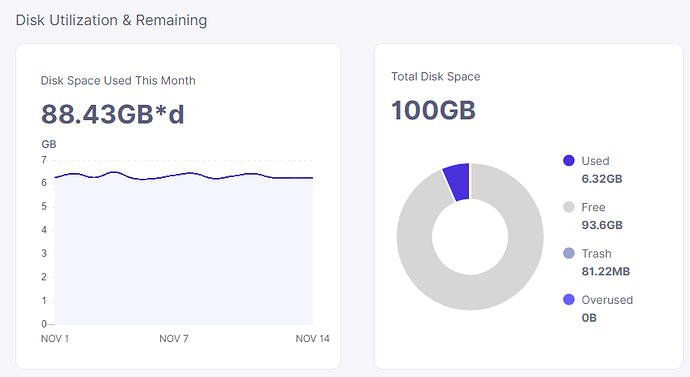 I think the GB*d makes sense on the Y axis. Not sure if it makes as much sense for the total though. Might be best to just show average stored for the displayed period.

Thank you. I will forward that to the developer. The graph looks awesome but I agree the GB*d value is strange.

On another note, I noticed this: 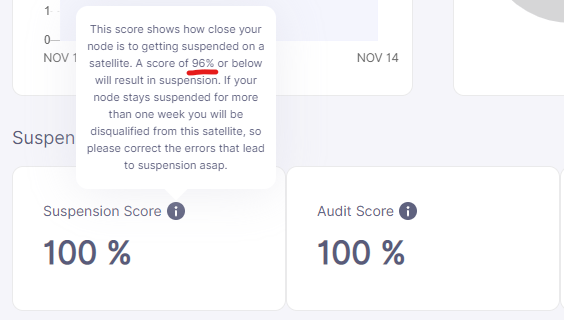 I initially also thought both scores were updated to the new formula, but @thepaul mentioned here that the suspension score still uses the old formula.

Is this actually correct? I was under the impression that the system switched over for both scores, since they both use the beta model. All three scores are independent, but we can ask @thepaul That’s right, we did not change the “unknown audit” score model. It doesn’t have inputs coming in at anywhere near the same rate, and there isn’t any particular mathematical reason why it should operate in lockstep with the standard audit score, so it deserves its own analysis and research done bef…

So I’m not sure color highlighting and description for suspension score should have changed (unless the formula in the background has since changed as well, which probably would actually be the best route).

Yep that is a bug. I noticed it on my dashboard as well. I don’t think we are going to get a fix in time and have to live with some yellow and red colore coding that is incorrect for suspension and online score.

Looks like that one is partially on me… I pointed to the tooltip here before I was informed the suspension score hadn’t changed. Oops. [storagenode] Update colors for audit score to handle 96% threshold for disqualification · Issue #5113 · storj/storj · GitHub

We thought it will be better to explicitly specify the B*d instead of just B so it helps SNOs with the payout calculation and avoid confusion. To convert it to Bm to reflect the payout value, you just need to divide by 30.

We will work on this as part of this ticket [storagenode] Rescale new audit scoring threshold on the dashboard · Issue #5312 · storj/storj · GitHub. It’s quite weird that we have different scoring thresholds for the suspension, audit and online score. It’s best to make sure it is uniform for all the scores. The ticket is open for suggestions on how best to do the rescaling on the dashboard.

To convert it to Bm to reflect the payout value, you just need to divide by 30.

Not really, you’d need to divide by the number of days that passed since the start of the month for it to be meaningful. Why not do this for the end user so they don’t have to divide anything at all? The unit can then just be B*m/m = B. Seems simple

. Change the description to average disk space used this month and you’re done. Easy to understand, no calculations needed

The ticket is open for suggestions on how best to do the rescaling on the dashboard.

I responded to the ticket with some links to earlier discussions around this and a suggestion. Hope it helps.