On my Dashboard it shows I am currently using 1.69.2 and when I hover over it it shows me that the minimum allowed version would be “1.24.0”.

I don’t know for sure but this does not seem like the correct value. When checking the logs I noticed it looks in “https://version.storj.io/” for the Information and can see that the 1.24.0 is actually listet there under “storagenode” but further down under “processes → storagenode” it tells me 1.69.2 would be the minimum allowed version and also the suggestet: (Picture removed due to new account restriction of 1 Image per Post)

Does the Dashboard maybe link to the wrong value in the JSON? or has it been forgotten to update the minimum Storagenode Version?
Or is the verison 1.24.0 from Febuary of 2021 actually still a allowed version to run?

Its mainly a visual bug and causes no direct problems but might confuse a few people into believing they have a allowed version when in actual fact they are behind on the minimum allowed version. Hence i thought I’d write up a Forum Post.

Picture that was removed in original Post due to limit: 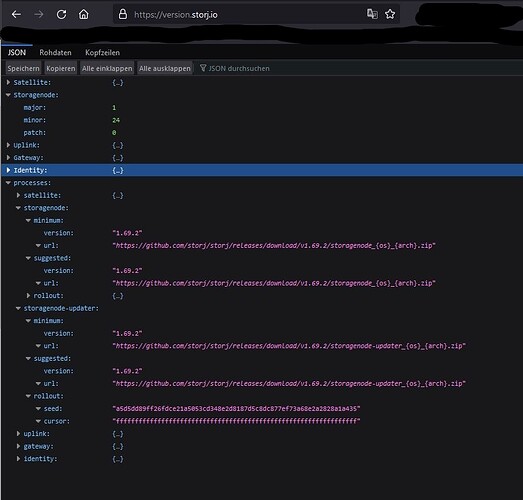 Hi @Anon22, the version shown in the tooltip is not intended to display the node’s running version but the minimum version required to run a node. I agree that the info is very confusing and we have a ticket to resolve that: Minimum version confusion with tooltip in SNO web dashboard · Issue #4261 · storj/storj · GitHub

Blockquote
Hi @Anon22, the version shown in the tooltip is not intended to display the node’s running version but the minimum version required to run a node

Thanks for the reply. I did realise that the Tooltip was not the version I was running. I was confused if 1.24 was actually a version that is still allowed (as its almost 2 years old). From your message I can assume that 1.24.0 is in fact the minimum version required to run a node. So the information is correct (even if confusing as pointed out).