v1.50.3 is ready for the storage node rollout. This time we have the storage node updater inside docker to test. The risks are high. Worst case docker nodes will not startup or will get stuck on updating to the following release. We need your help to mitigate these risks on as many test machines as possible. Please help us.

The new docker image is already published but not tagged as the latest. So your existing docker node will not install it yet. We would like to run 2 tests with your help.

After the first test round, there is still the risk that we crash production. So in a second test round, we would like to update as many mainnet nodes as possible before the docker image gets tagged as the latest.

The last step after we finished both tests rounds will be a cleanup. For both test rounds, you will have to specify a specific docker image 5f2777af9-v1.50.4-go1.17.5. At the end please reconfigure your system to switch back to the latest docker image.

Hmm, I’m not sure who’s idea this was in Storj but this isn’t very dockerish having applications update themselves beyond the tagged versions of the docker image…

The whole beauty of docker is being confident that you can pull an exact image and version of software, and know what it contains - I don’t like this behaviour, I like to be in control of my node and when it updates…

Please make sure you provide a switch to disable this behaviour, for SNO’s who don’t want this - although it’s easy to prevent in docker if you don’t

This issue might give context on why we decided to this: Support slow storage node version rollout for all existing Linux/Docker installations · Issue #4489 · storj/storj · GitHub

Not a great start on my test node. Swapped out the image and it got stuck in restarting with the following repeated logs. 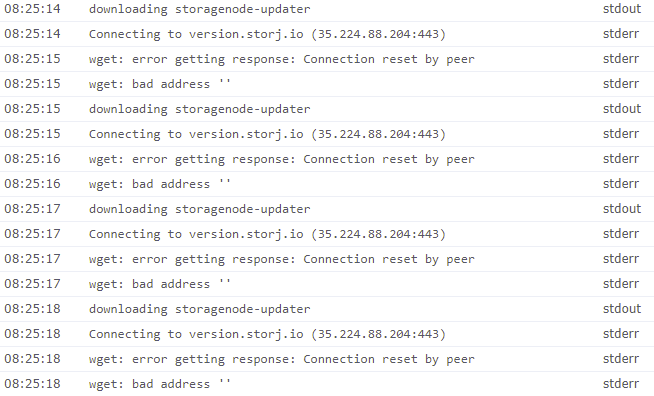 I also noticed that it’s connecting to the production version server instead of test for the initial download of the updater. Should we be setting VERSION_SERVER_URL in the run command? It seems to default to production in the docker file atm.

Let me provide some context. This is on a Synology DS3617xs, which is amd64 architecture. The only thing I changed in my (working) run command was the image tag.

Thanks for the background, don’t get me wrong I completely get it - I’m just trying to provide some constructive help, to avoid lots of dev headache.

Some other thoughts for you, again trying to give some other options

Anyhow, good you are testing this approach, and communicating with us.

Swapped out the image and it got stuck in restarting with the following repeated logs.

Oh no. I did a mistake. Version control is currently pointing to a not existing version. Should be fixed now. Please retry.

Getting the same result. Should I be using a new image?

Also, this seems like a pretty big flaw in the system. If for some reason the url isn’t reachable or the file doesn’t exist, recreating the container would simply make it impossible for the node to start again. Could a fallback be built in that keeps a copy of the last working binaries in the storage location and reverts to them in case something like that happens? Otherwise I’m really not feeling good about this approach.

I also agree with @CutieePie that this isn’t really how docker should work. You already use a custom version of watchtower, wouldn’t it be possible to make watchtower aware of the latest version have it use the rollout system to determine when to trigger automated updates of the node? I’m aware that this wouldn’t block SNOs from updating earlier, but how many would really do that manually? And if they do, how likely is it that they will do that very quickly?

I just really don’t like that I could end up with a container that is unable to even download the binary.

Ok great. I did the second mistake as well and forgot to publish the v1.50.3 release. Now that is also fixed and I see no more reason why it shouldn’t find the binaries now.

Should we be setting VERSION_SERVER_URL in the run command? It seems to default to production in the docker file atm.

Yes you should set VERSION_SERVER_URL in the run command to point to https://version.qa.storj.io

Any way to opt out of this? It looks bad to me.

Yes you should set VERSION_SERVER_URL in the run command to point to https://version.qa.storj.io

Will do! This should probably be added here as well then: Please join our public test network

Tried again and also set the VERSION_SERVER_URL in the run command, but same result.

Also tried without the VERSION_SERVER_URL set and get the same error (with different url of course).

Tried again and also set the VERSION_SERVER_URL in the run command, but same result.

The issue linked above implies that this fixes a problem of being unable to push a fix for bad code to docker containers. Does that mean this updater will only be used in rare cases of known bad code as opposed to a general updater? I would consider this a much better idea than having a self-updating docker container. That would at a minimum increase the difficulty of downgrading.

downgrade is a bad idea. If there are migrations for database - it will not be reverted and your downgraded version would not work.

The output as expected:

Anything I can do on my end to help figure it out?

What happens when you change the entrypoint to sh and connect to the QA version server with wget?

This should open the terminal inside the container:

Connect to the QA version server:

I did also notice you were using a different image than in the top post.

Uh, so my suspicion has been confirmed. It is an issue with BusyBox wget, so we have to switch to GNU wget in the storagenode-base image.