Did some kind of testing resume on stefan-benten ?

Looks like both ingress and egress went up significantly in the last few days. Still insignificant compared to other satellites but it’s doing something !

My graph for that sat doesn’t look quite like yours… Almost all traffic (90-98%) has been repair ingress/egress…

that’s weird, ingress should be equally distributed across nodes. Your bandwidth used is also mush higher.
I guess we’ll see what happens in the next few months.

There is no predictable patterns, let’s your node doing its job

Not on my node

So you’re saying that testing hasn’t resumed and that it’s just normal variations in traffic ?

Are you sure your node wasn’t just full during those days? My graph looks a lot more like @dragonhogan’s.

Or could your node have just finished vetting on that sat or come off of suspension, which is why you could have also seen the uptick in traffic?

I have no idea and it doesn’t matter for me as a SNO while this traffic and data are paid. 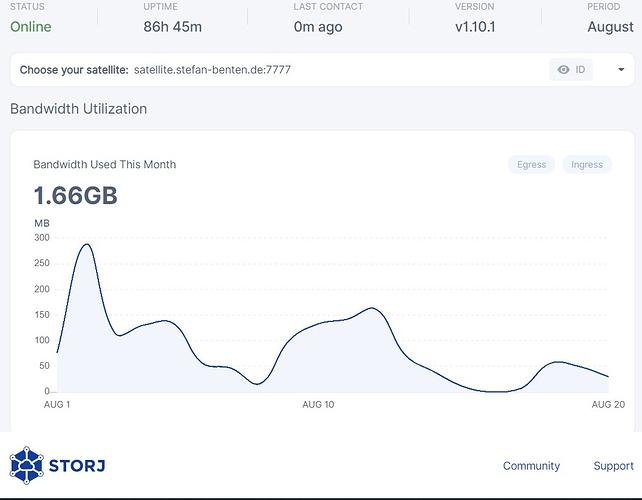 You’re right it just got vetted on stefan-benten…
My bad thanks for the input guys !
The worst part is that I saw it got vetted but my brain just didn’t make the connection.