Why wouldn’t you want to attract new SNO’s with new hardware dedicated just to run for StorJ v3 and the project?

So, there would be only long running nodes and they mostly will be run by Operators who doesn’t concerned regarding covering bills, because if you heard us - you will use the HW which will be online anyway, with Storj or without, so all costs already covered and any earnings will be a pure profit.
Of course you can take a risk to invest in HW, but there is no guarantee to cover your bills, since the service is used by real people and thus there is no predictable income.

Hi Alexey,
I think your statement is a bit misleading and doesn’t promote good image for new potential SNO’s.

Why wouldn’t you want to attract new SNO’s with new hardware dedicated just to run for StorJ v3 and the project?

Based on your statement which to me sounds quite negative in short means: “Don’t expect to earn much or be paid to cover running costs for your node. Instead you should just use old dieing hardware that you don’t care about”.

You see I am one of those SNO’s that bought dedicated hardware just to run StorJ and it was an investment to do it. The fancy earning graph and calculator on the website showed how much an SNO can earn per TB etc etc… What it doesn’t show is the fact that supplying said TB to StorJ isn’t going to be filled for many many years meaning you wont actually receive said “earnings” even though it’s just an estimate.

Now, how do I feel that my higher tier and new hardware is being paid the same compared to someone else running dieing old hardware on a rPi? Is it fair to be paid the same? Well I don’t think it’s fair and higher tier SNO’s should be in a separate bracket to lower tier SNO’s running dieing hardware, but then again StorJ doesn’t care about that. It looks like “any hardware is good enough” as long as you have good uptime and audit’s.

This was both an interesting and good learning experience running a StorJ v3 node on new hardware and comparing actual earnings to the “website earnings calculator” along with a few community SNO’s sharing their cheaper rig builds and their earnings.

I will share the node earnings thus far just to put things into perspective of my experience. 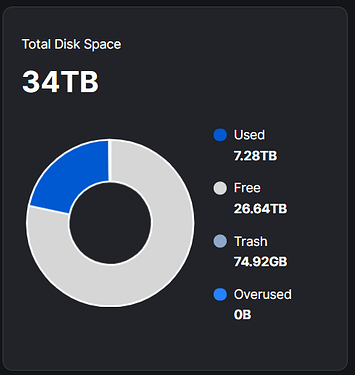 31 month old node.
Electricity cost per month for the last 31 months outweighs the month’s earnings. And this is not even looking at the $$$ invested in new hardware to run the node, also wear and tear.

Some of you are probably thinking and asking your selves, why are you still running the node and will you continue. The short answer is: Yes I will continue to run the node as I want to support the project but it makes zero economic sense to do so. Currently this is like charity and I am giving away my storage, hardware wear and tear, up-time and bandwidth per month for free.

Back on topic regarding the drop/change in threshold for payments. It makes sense for StorJ but doesn’t make sense for SNO’s. I personally wont switch to L2 even if a bonus payment in StorJ is given and I will give my reasons below:

I noticed a few users have touched on a different topic part of this discussion on economics which touches a few areas on:

I just have 1 question on this:
Since StorJ token cannot be mined like other coins, have all the StorJ tokens been minted ie was a total supply been fixed and held by StorJ? Or are NEW StorJ tokens minted on a regular basis?

I’m sorry that you read this like that.
What I mean: do not expect a ROI on dedicated hardware, it could be, but not guaranteed.
Always do an estimated calculations before spent money.
All decision will be up on you anyway.

We will not promote to invest or give an financial advises this is against our policies.

Don’t expect to earn much or be paid to cover running costs for your node. Instead you should just use old dieing hardware that you don’t care about

Your interpretation is far away from the original statement and its meaning.
I would rephrase your definitely negative statement to what we usually suggest:

The service is used by real people, thus there is no predictable income. Do not invest to anything with purpose only for Storj, you may not have a quick ROI. It’s better to use the existing hardware that will be online anyway - with Storj or without, in this case any earning will be a pure profit.

We do not want to mislead new operators, which expect a quick ROI, like in mining. This is not mining, even if you could them compare. The main differences:

StorJ token mint and ongoing minting of the StorJ token.

Is impossible. All tokens are minted back in 2014.

IMO, While you shouldn’t buy dedicated hardware for Storj, you also should not just use anything.

and for any replacement node you need to go through vetting all over again.

Yeah, and then years of accumulating data, especially with the slow ingress now, so losing data means you lose a few years of income.

We don’t need to rehash the debate here, I encourage anyone to search the forum for discussions about RAID. But this is a hotly debated topic. I happen to disagree with it and so do Storj Labs’ recommendations (they recommend one node per HDD). I run nodes on arrays as well as on individual disks. The only reason I use arrays is because I’m using extra space on multi purpose arrays. @Pentium100 's and my opinion as well as others on this is readily available in other topics, so I won’t start up the same debate here. Just know there are differing opions on this.

$700 for a few years… minus 1000 for eunning costs, minus hardware, minus wear and tear requiring hardeare replacement… honestly if my node packs it up for any softeare reason, bug or suspensuon or whatever i’ll just turn it off.

I got a bit curious here.

Electricity cost per month for the last 31 months outweighs the month’s earnings.

You mean electricity cost of whole household, or just dedicated hardware? If you meant dedicated hardware, what kind of beast did you get? Judging by whole disk space, quantity of disks is rather understandable, so is it not like drives themselves draw out so much (~10W/h per drive at worst If I am not mistaken). And even with some high tier threadripper, EPYC or Xeon they would not reach even 20% load I suppose, so it is not like they draw maximum watts either, so lest say something below 100 W/h. Other components like mobo, RAM and etc. draw even less. Is it just that kW/h price is so high? For me it is ~0,08USD per kW/h.

And even with some high tier threadripper, EPYC or Xeon they would not reach even 20% load I suppose, so it is not like they draw maximum watts either, so lest say something below 100 W/h.

And for people who cannot afford brand new hardware it’s more. For example, the server which runs my node VM:
2x Intel Xeon X5687
108GB RAM
16 hard drives (only 12 are in the Storj node pool, others are used for chia and other things)
6 SATA SSDs (system drives, SLOG)

I think they mean their rig uses more than 13$ a month - probably 75-90W would do that in europe with current prices. Guessing 150W?

I see. Seems like the reason is higher prices of electricity after all.

I have been running several nodes for almost 3 years. It is true that the return now days looks much lesser compare to the previous years especially when the token price increase so much now. About usd1.2 now.

I think maybe storj should come out some extra incentive for die hard storj sno fans. Besides. You guys are earning in hard cash USD to pay your staffs. But for SNO, we getting paid in token based on current market value and usage. Yea … the less usage. You get paid less. Those days I get about 33 coins per month. Now I’m getting about 3 coins. Not to mention. I have to wait for minimum payout before receiving it.

Your balance is calculated in USD, not tokens. The convert is happen when we send tokens.
So, you always receive an USD value in STORJ tokens.

When investing, always make your ROI calculations . In this case it was wrong and Storj always said. Use you old existing devices. I run my node on my Synology and it would be on anyways. If you want to earn money quick. Buy a few 3060ti/3070 non LHR and mine eth. I make 7usd a month on storj while my friend makes 7usd a day mining eth with his 3090. You just can’t compare.