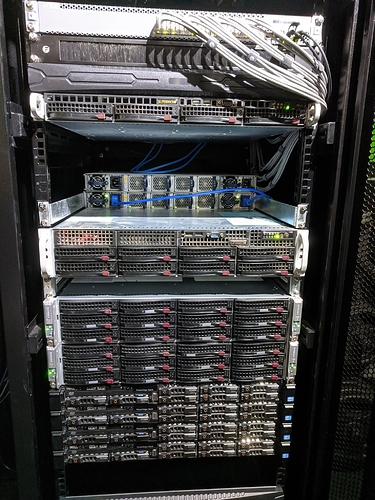 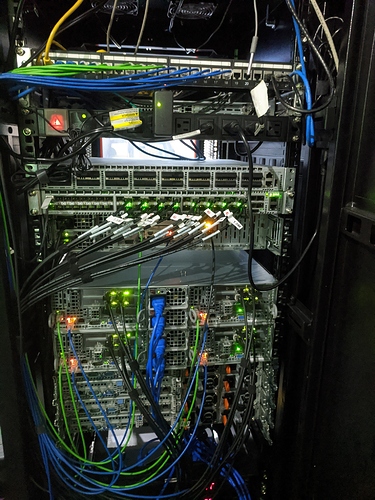 The servers running the storage node cluster are in the middle. There are 2x2 node Supermicro FatTwins resulting in 4 server nodes total, each with 4x10Gb networking. The back shows it a bit clearer. 6 HDD bays for each server. The volume storage cluster is running Ceph for storage in a 3+1 EC configuration with a host level failure domain. VMs are hosted on 3x replicated SSD storage again with host level failure domains. This lets me patch the hypervisor and Ceph nodes (hyperconverged, so they are the same) without interrupting the storage subsystem, just reduces the tolerance for failure during maintenance windows. There is a 3000VA UPS in the bottom of the rack. This runs my homelab and parts of the house infrastructure that I want fault tolerance for as well as for Storj. Separate internet connections (separate cable (600/30) and dsl (150/40) internet connections) with my edge firewall handing failover and DDNS updates should either go connection go down for any reason. Keeps customer data as accessible as possible from an Internet outage.

The cluster storage itself is made up of HDDs that I have accumulated over the years from homelab upgrades. Moving to this setup a while ago has let me utilize all of those HDDs, from 3TB to 8TB disks with even total capacity spread across all 4 nodes, each containing 28 TB of raw capacity, 72 usable after formatting and Ceph EC. 40TB is advertised out of this cluster for Storj.

Also have a similarly sized deployment in another location but with 120TB of advertised capacity that is also used for some other projects of mine. 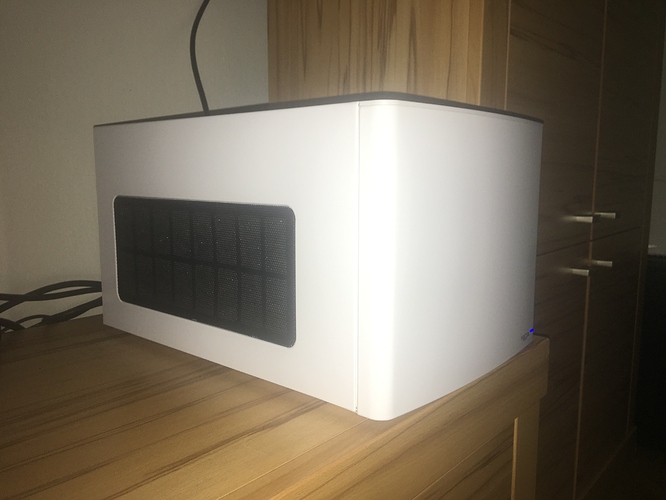 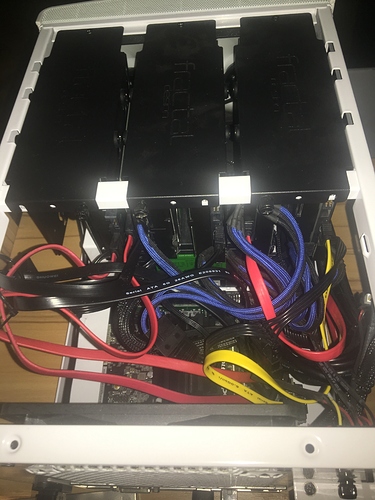 Not superior server parts storagenode, just my easy and small home setup which is being used as NAS, with Win 10 Pro, 1x256 SSD 1X4TB 2x3TB 2x1TB(6/6 drives capacity), 4 cores Celeron J4105 with about 10W max power consumption, on 600/60 optic fibre connection. As box is in living room i had to disconnect HDD led form case, as it’s flashing was crazy.
Plan is change oldest 1TB drives for some newer and bigger, and especially for storj availaibility there will come some power backup soon.

At first it looked like a microwave😀
Love the low watts

I wanted something unconventional other color option for this great small case is full black, for homemade NAS one of best possible cpu/mobo in my opinion

Cudos for juniper and arista 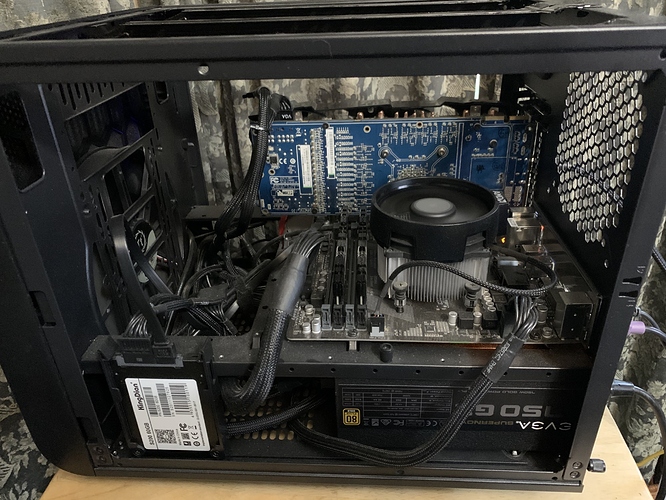 I was trying to set up a FileCoin node but the communications were really spotty, so I found Storj and decided to try to be a SNO using:

Rig draws 55 watts (without Monero miner running)
Previously I had used this rig to run multiple AMD Vega 56 GPUs for Monero mining.
In November 2019 Monero changed their algorithm to RandomX so I converted this to RandomX CPU mining.
Today the CPU uses 4 cores (8 threads) dedicated to Monero mining with XMRig 5.5.0 @ 4KH/s @ 65 watts
Storj uses a fraction of the CPU (2 cores/4 threads mostly idling)
I typically use Titanium rated power supplies running at 240 volts - but this rig draws very little power and I will install a smaller PSU when I have a chance to swap it.

I just wanna say welcome. To being a SNO
Also as you know its not always wise to run a mining rig and a storage node together in case of any instability you have a higher chance to brick a node and loose all data and or get DQ incase the system crashes. When uptime becomes enabled for nodes again.

He sayd that it was as Rig, but will be a node.

Currently, a Proliant Microserver G8 to start with. 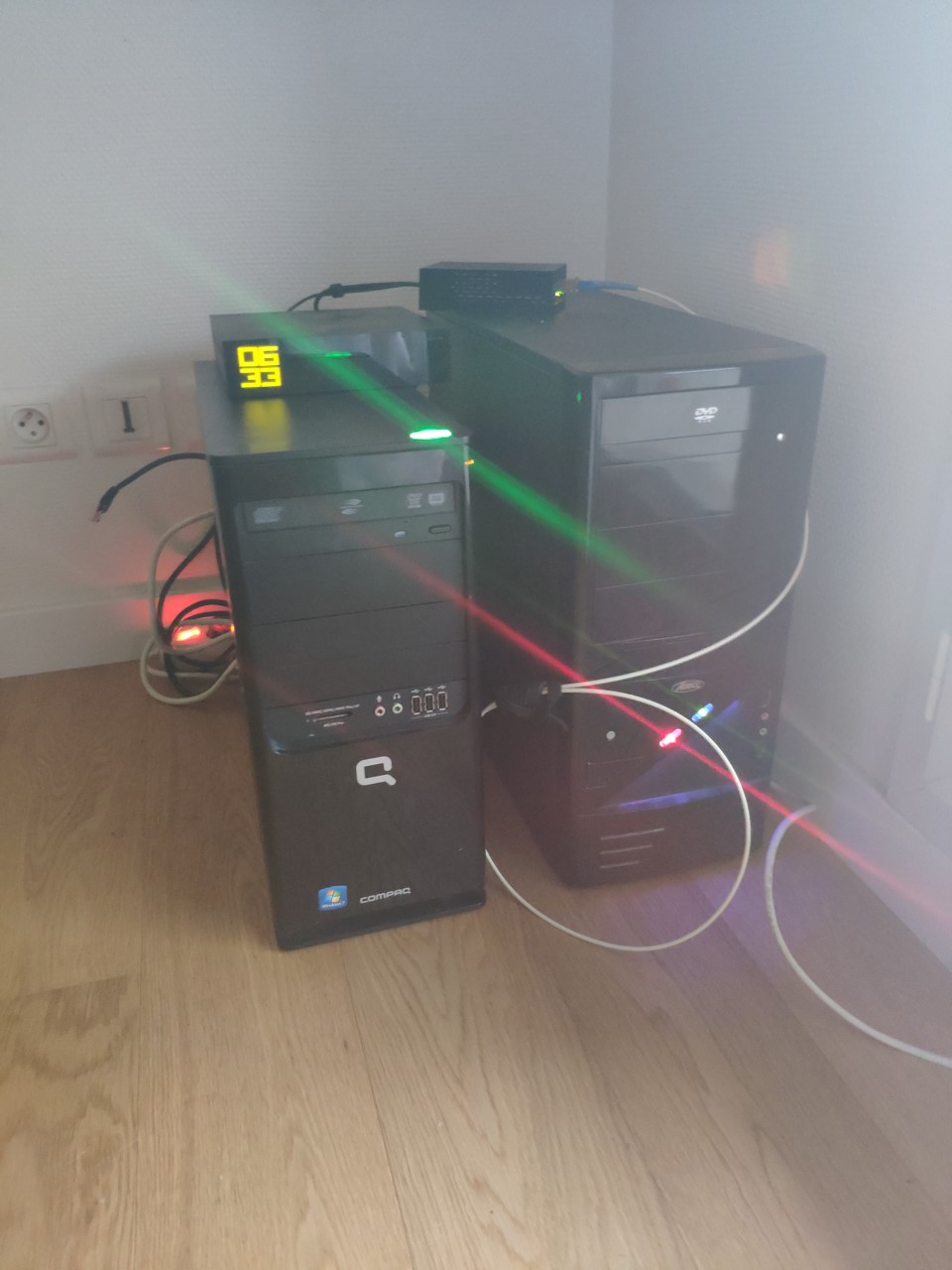 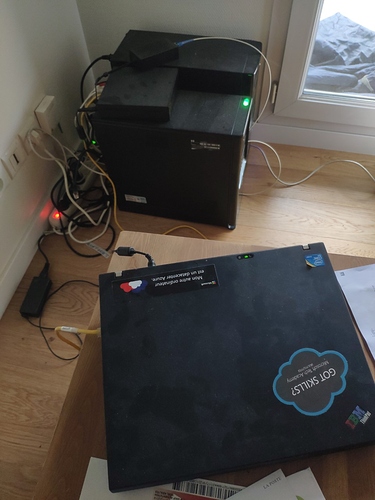 Filesystem on which the docker container run is replicated over network between the 2 PC by Gluster.
In case of disaster on one PC i should be able to restart manually on the second.

can you share the instructions you followed to setup your raspberry 4 for storj?

Raspberry Pi3 model B is a microcomputer for doing almost anything. Let's use it for installing storagenode for V3 of the Storj Network! In this guide we presume that you have a Raspberry Pi 3, set... 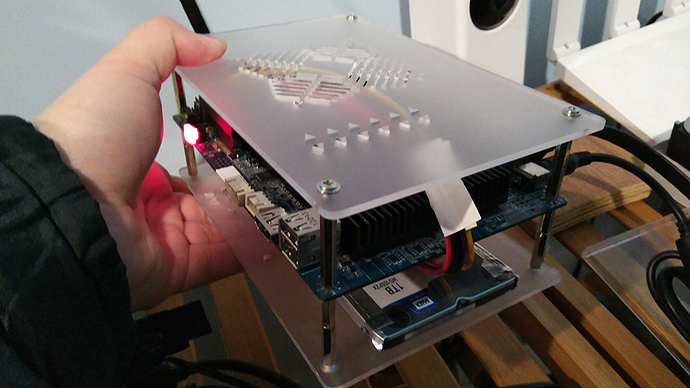