9 storagenodes but it is mostly chia plots (60TB) 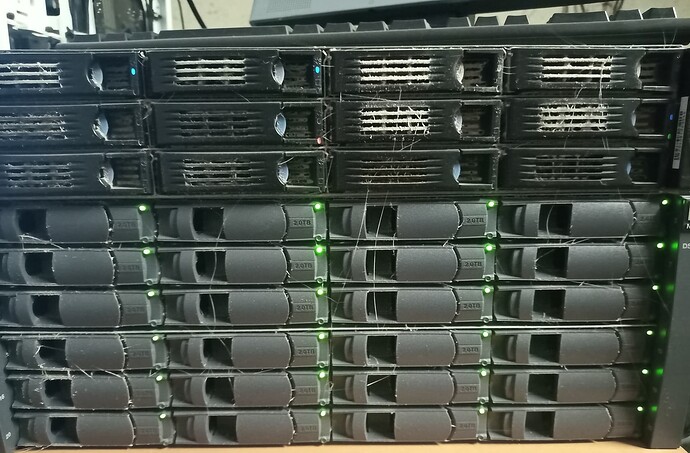 was curious about what happens if one had to many dust particles in the air… and had some demo work to do… gave it a round of concrete dust from a demo saw.

does seems rather interesting that two disks would randomly start having issues, first one was within 24 hours and second one was while trying to scrub after resilvering…
both disks worked fine again afterwards, tho did have to reseat the first one…

10 posts were split to a new topic: Stories about storage and hardware

Rosewill RSV-L4500 Chassis with (3) 5 HDD hot-swap Bays (15 HDDs), The 2nd Chassis is acting as a JBOD with a HP SAS Expander & GPU Riser Card for Power, its connected to the server to a SAS HBA Card. The Server Motherboard is an old gaming computer, one of the first gaming PCs I built. It would of been sold or sent to the trash. Running Windows Server. If anyone knows where I can find a high density top-loader chassis, let me know. Also a modernized version of the HP SAS Expander. 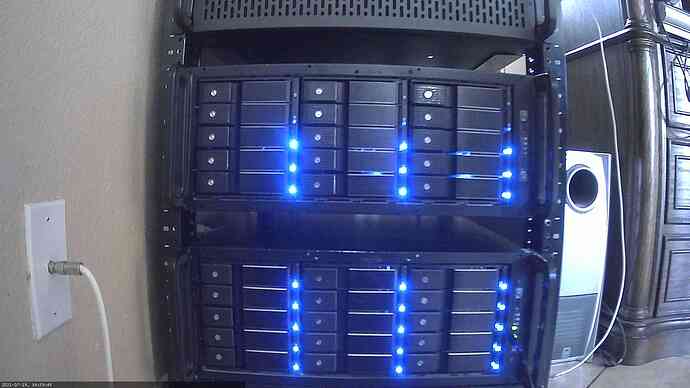 e(lectronical) Bay will be your best friend

Be mindful, that the HP SAS expander with 12G are still rather expensive and likely not worth the upgrade if you straight just run storagenodes off of the drives.

Thanks, at least I now know there is a 12G Version. I wonder if any other manufacture has made similar cards. I setup windows server and running a single node. I created a software raid for the storage node. I use the server to store my own stuff as well, so I have 2 storage pools on it. I’ve been debating if I should archive the stuff I don’t access all the time to a offline hard drive or pool. 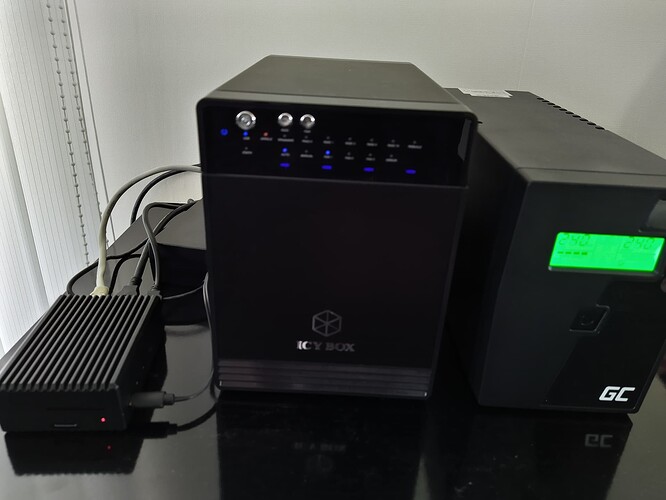 Here also an update of my server at home, meanwhile with Multi-WAN, Mikrotik, UPS (same as @tylkomat

The two towers are Proxmox servers. I had the tower before I got the server cabinet. Has to be built into a reasonable server chassis.

Proxmox and Zabbix run on the Pi’s

The server below is currently not running

Am I dreaming or is there an actual plant on top of all that massive concentration of high-tech technology?!

Yes, I saved it from a dark corner and now needs a lot of light. There is always a light on top of the server cabinet, hence the location up there

My STORJ nodes (currently one of 9 TB 16 month old and another 5TB on vetting) are on the Microserver Gen10+.

The 9 TB node have been running on a RPi4 (also on the pic) for all its life, until a few days ago.

As for the hardware:

As for the storage:

As for the connection, I’m currently on a 1Gb symmetric FTTH connection from Telefónica/Movistar - the biggest ISP on Spain.

I personally found Storj a project that does not give you as much rewards as another uses for the disks - mainly for the slow process of filling the nodes - but very rewarding. Once you understand the software and have a basic IT administration skills, it’s just plug it and leave it alone. 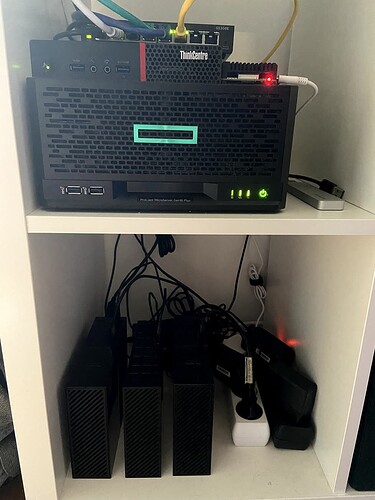 What does such line cost in Spain (I’m in Germany)?

What does such line cost in Spain (I’m in Germany)?

1Gbps on Movistar is, for now, only for the clients with the full package (mobile phones, TV, telephone and internet) - around 80 EUR/month.

You can find similar connections on other ISPs (without TV service) for 50-60 EUR/month.

I don’t know how much is that compared to other countries, but here in Spain there is an price and speed war between ISPs - which of course benefits customers

Unfortunately our federal government did not pursue their digital agenda and therefore fiber lines are not broadly available it really depends on where you live in Germany. If you are lucky and live in an area where fiber is available or is about to get build cost are similar. I just checked Deutsche Telekom, they charge €80 for 1 Gb connection but it comes only with 200 Mbit upload. But I think when there is enough competition, then upload speeds will increase too.