I have properly configured my nodes (on Windows and under Docker on SYNOLOGY NAS).

Only issue which I have is QUIC looks uncofigured. I tried re-add one node but still is the same:

I did not change anything on router and this works properly for all nodes from this NAS:

This is how I am configuring or re-create node if needed:

For other nodes I have adjusted ports and paths etc…

This QUIC issue is there for all nodes running this SYNOLOGY NAS after update.

Any ideas what can be wrong? Do I have to just wait longer? 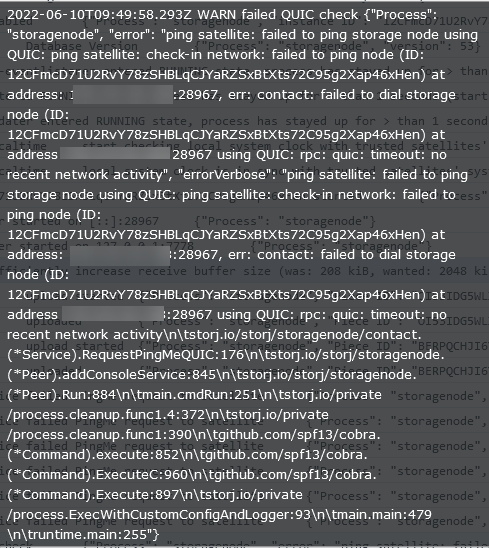 Do you have configured Firewall on Synology

Synology DS1817+ DSM 7.1-42661 Update 2 which is latest update. Works till today´s update.
Firewall is turned off on Synology. I had to play with firewall only on Windows node but there is no issue with QUIC.

This is how docker config from DSM GUI looks like:

Hi LordWigo,
that would be a big coincidence, but is it possible that another process is listening on the NAS on port 28967/UDP after the synology update?

Not sure if the docker log would write something like “can not bind/forward to 28967/UDP” when starting the container.

On my QNAP NAS (sure Synology too) I can check via SSH with the following command whether the port is open:

If the command does not provide any output, the port can be used. If an output appears you can see which process already has the port in use. For me it’s dockerd, of course.

I had the same problem previously with my Synology. In the end it helped me to delete the ports in the router and create them again. It helped, but I can’t explain it

Thanks for tip anyway

I have tried via SSH but not very advanced in this (unix?) commands:

I have run more docker cointainers and there must by configured ports like this:

So for each storage node/container port must be 28967 but local port differ for each container:

Strange is that this works perfectly. Going to search how to list assigned ports on SYNOLOGY.

Thank you for the guess. 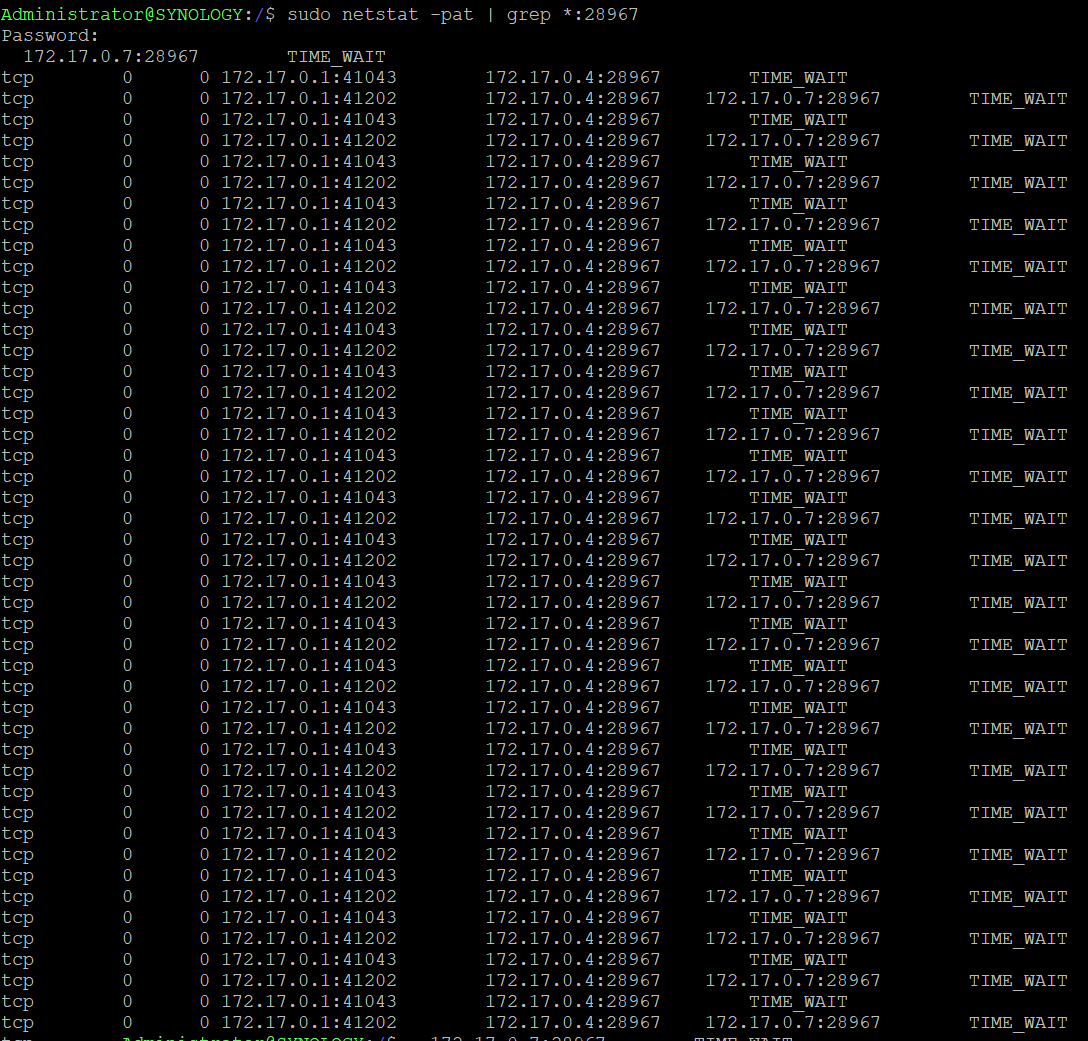 Not sure if this what I am looking for?

I have to agree with others - try to delete rule on your router for UDP, then add it back. Make sure that the destination IP is match the IP of your NAS (if your router cannot address it by name for example).
Please also try to re-create a container on the NAS.
It’s worth to check the firewall on Synology - maybe they enabled it automatically during upgrade. In this case just create an inbound rules to allow TCP and UDP ports of your nodes.

Firewall on NAS is turned off:

I have already recreated all nodes (docker containers) but did not helped.

Strange is that node running on SYNOLOGY (alongside other nodes) has this issue:

But Node running on Windows behind the same router is perfectly fine:

Please try to re-create a container on your Synology after you re-created a rule.

I have recreated container after re-creation rule on router. Restarted router as well.

You showed the rule for 28968 which you supposedly re-created, and then re-created a container with 28967.
Perhaps you confused something?

Port 28968 in my previous posts is allocated for my node running on Windows to demonstrate that other node running different machine are running fine behind the same router.

So all these 7 nodes has this QUIC issue.

One node running on Windows (28968) works without issues.

I have created different VM windows machine hosted on SYNOLOGY NAS (different IP than NAS itself) just for test.

And this node running also without issues:

Hi LordWigo,
the first thing I see is, your router seems to use/link the forwarding rule with the MAC Address(The Dropdown behind the Internal Host inputfield).

Is it possible the MAC-Address of your NAS has changed after upgrade? Normaly the MAC Address is branded to your Ethernet Adapter Chip, but most NAS has two Adapters and create a virtual MAC Address or uses the MAC Address from one physical member of a network team.

Try to ping the ip from your StorJ container:

after you recived your ICMP echo replies, type

search the line with the IP 10.0.0.200, the MAC Address will be shown in the same line.
That Mac Address must match in your forwarding rule on the router.

With reference to the check for listening ports … netstat was my first choice, but not working on my QNAP NAS.

netstat -nau
-u for UDP Ports
-t for TCP Ports

My MAC match with NAS:

I think if there would be issue with MAC address I would not have Online status for my Nodes at all?

I am trying to run ping and other commands from container terminal but with no luck:

Tried some bash script for ping:

Ping via SSH works but this is probably just from the same IP (10.0.0.200) no from docker container: 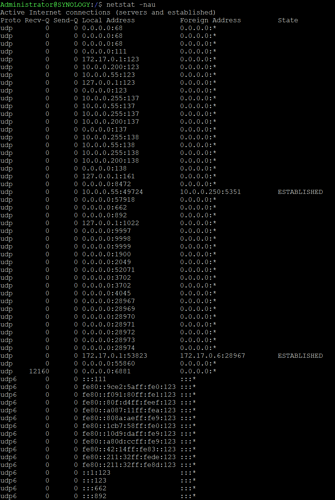 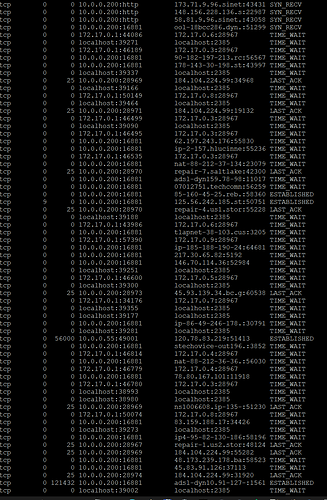 Here output of netstat -u:

So do you suggest to kill somehow kill those listen/waiting connections?

My MAC match with NAS:

OK, that’s what I wanted to hear.

I think if there would be issue with MAC address I would not have Online status for my Nodes at all?

That’s what I thought when I wrote it. But then I thought it would be possible that the node display online, if he can establish a connection to a external host.

But then nothing should work.

I am trying to run ping and other commands from container terminal but with no luck:

Seems, there is no ping command in the image.

So do you suggest to kill somehow kill those listen/waiting connections?

Hi, your docker looks fine - you have a router issue…