Raspberry pi 4 - how to host a node

Hello i have currently ordered a raspberry pi 4 to host a node.

my first issue is how do i host a node on a raspberry pi 4. what operating software do i use? and then is there a step by step guide on how to host on a pi.

I have a RPi4 running Rasbian. I followed the setup instructions here and they worked perfectly. https://documentation.storj.io/

Also yes, that setup for sata to USB 3.0 would be fine.

thank you for your quick reply. is hosting a node on a pi 4 good enough? will there be any issue with performance or speed?

They’re not the fastest nodes, but they work. Much better than RPi3B+'s in terms of processing power and transfer rate over USB.

One upgrade to my pi board after first setting it up was to get a good case with a good fan and heat syncs. I tried a couple different ones out, and finally settled on this one and it really helps keep the board cooler as it will definitely run hot without the active cooling. 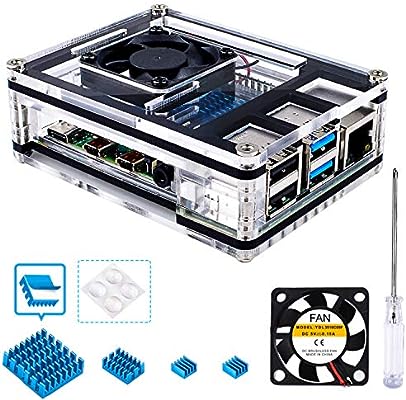 I will get that case too and when i my pi arrives. can i message you privately if i get stuck with the setup? thank you

how long have you been running your pi setup and with how many hard drives and size. what is you payout as i like to see what is the actual earning.

I have a WD 10TB Elements Desktop Hard Drive connected to my RPi4. This was actually an upgrade I made after first starting my node in August 2019, which was started with a WD 4TB My Passport.

Additionally, there are other factors that have influenced my payouts thus far, which include the fact that up until recently, payouts included a 2x or 3x multiplier that was being offered to SNOs as Storj was ramping up for production launch. Payout values also are a fraction of what I’ve actually earned, since the payout model includes the escrow “hold back” (see this explanation for that here: Held-Amount and Payouts and here: https://storj.io/blog/2019/01/sharing-storage-space-for-fun-and-profit/ ). And last factor is that in January 2020, there was a huge amount of “download” bandwidth used that was part of a test on the network, which is why there’s a big jump in payout amount, and part of Jan 2020 payment was delayed until the Feb 2020 payment, which is why that’s also higher. All SNO’s are eager to see how much the network is used now that production has officially launched, but that’s fairly uncertain at this point.

thank you for the detailed reply. i also have this product linked below. willl i be able to use this as storage for my node?

I probably spend too much time perusing this forum, but from what I’ve read thus far, network attached storage (vs. direct attached storage) is less than desirable. @Alexey could provide a bit more detail on the reasoning behind that, or probably even better point you to a previous forum thread where it’s already been discussed at length.

So long story short, that doesn’t appear to be the best option for a node. Also, there are multiple threads that outline different node setups (single vs. multiple HDDs, RAID, etc), but it appears that the highest recommendation for node setup is a single drive per node.

is this enclosure good enough for hdd. i will be using a wd purple 4tb and how long will it take to fill this hard drive up. thanks

I’ve not purchased an HDD enclosure before, and I don’t see a link in your last message.

Sorry didn’t see the second part to your question.

For filling up the drive: first, the drive will have a lower actual storage capacity than listed on drive. 4TB drives typically have 3.64TB of usage space, and second the setup instructions say that when setting storage limit for node, you should leave ~10% cushion above actual so that leaves you with ~3.27TB.

Even with that space, I would image it would take quite some time to fill it up. For comparison, my node has been running since Aug 2019, and I have ~1.85TB space used. Data is constantly coming in and stored data is constantly being deleted, although more coming in than being deleted. Also, since mine’s been online through the launch prep phase, ~45-50% of the space currently being used is from the test satellite(s) and the other half is actually from the Tardigrade (customer) satellites. I’d imagine over time the space used by the test data will continue to decrease as they are slowly deleting it.

How did you get that estimate ?

No need to @ mention people who are already very busy. Many people can explain this and there is also the search function. Most network storage protocols like SMB or NFS can and will eventually lead to corruption with the sqlite databases the node uses for its own bookkeeping. Only iSCSI is safe from this, but even then the added latency for using networked storage will make you lose the race to other nodes much more often. If you’re looking to buy a cloud connected HDD, buy a NAS that supports docker so you can run the node on the device itself.

I believe that is not correct.
In fact, 4TB drives do have 4TB available. The problem lies in the fact that most OD report space in TiB, not in TB, even though they display the “TB” unit.

And because StorjLabs made sure nodes’ configuration uses the correct unit (TB), you should be able to configure a node with “3.6TB” on a 4TB disk (unless your OS reserves some space for other purposes, which is usually the case on Linux for instance - that can be disabled though).

In Linux, use df -H to display sizes with the actual TB unit, so you know precisely how much TB you have available for your node.

Yes, that was a typo. Corrected

unless your OS reserves some space for other purposes, which is usually the case on Linux for instance - that can be disabled though

Thanks for the explanation. Yes, my 10TB drive reads as 9.1TB on my Raspbian node.

TBH, I would have expected more available space on a 10TB drive. Something like 9.5TB. Hm.

Have a look at some articles like this https://www.unixtutorial.org/free-up-reserved-space-in-filesystems to know more about reserved space and how to fine tune them

@BrightSilence: That’s right, but dragonhogan did not say “TiB”, so I’m confused ^^
But okay I get it now. That’s because the OS doesn’t use the right unit.

These units are confusing anyway, because the whole world mixes them up