The payouts for held amounts are paid taken in account the minimum threshold adding to the undistributed payout?

Currently i have 4 nodes with 17 months now.

First question:
The payouts for held amounts are paid taken in account the minimum threshold adding to the undistributed payout?

Second question:
3 out of 4 nodes states that I have held returned. (small amount so I think it will be added to the the undistributed payout!
Now, my question is:
The fourth node is the stefan-benten node (I suppose was the first one decommissioned).
I have a total held of $127.45 with ZERO returned. Even on 17th month.
Will this amount be paid?! If so, when? Or there is a problem with this? 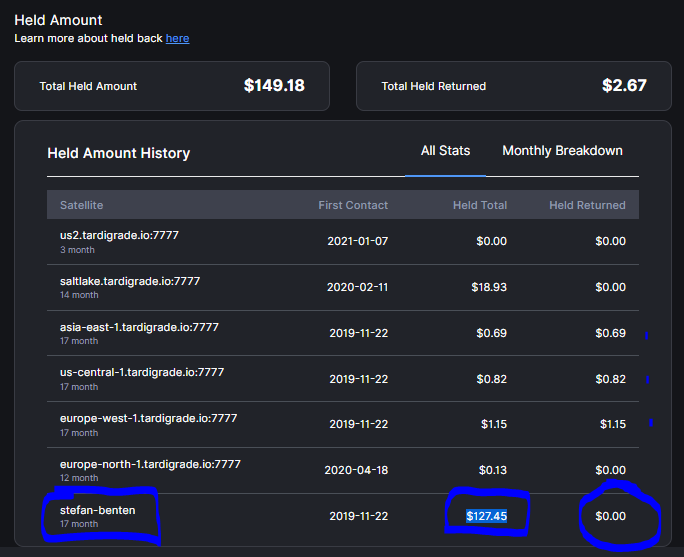 The payouts for held amounts are paid taken in account the minimum threshold adding to the undistributed payout?

Correct. The held amount returned is part of the undistributed payout.

At the stefan-benten decommissioning all held amounts were returned, if the storage node was online at the time. Did you have some downtime at the end of 2020-08?

Hey Everyone! Now that we have paid back all of the held amounts for the satellite.stefan-benten.de Satellite it is going to be shut down in 5 days. This means you will only be able to see the payment data for your node on this satellite for the next 5 days. All other satellite payment data will NOT be affected and you will continue to be able to see that data whenever you would like. We would like to urge everyone to take one final look at your payment data on the SNO dashboard for the satell…

At the stefan-benten decommissioning all held amounts were returned, if the storage node was online at the time. Did you have some downtime at the end of 2020-08?

Yes, i had a problem with my node, and then i reverted back some months ago. It seems i missed the payout!
Is there anyway to get it?!

You should raise a support ticket - https://support.storj.io/hc/en-us/requests/new

Dear Stob, just did.
Many thanks for your support.

I would suggest to take a look on TXs on your wallet for the month September 2020. I’m sure you have received your payout including held amount from the Stefan satellite.

Hello all! Hope you all are fine and safe! I am with a lot of doubts at the moment! So, i will strat from the beginning: I had a node since sept. 2019 until Apr 2020. I lost my wallet key and to worsening all my wife did something on my computer while cleaning that messed up with my windows. I needed to make a new clean install and never came back no install the node! Right now and a couple of months later, i am installing the node again on top of older instalation with all the previous nod…

So yes, it was offline for more than a month.

Anyway, thank you for your help and feedback regarding this.