3 of my nodes got updated to V1.67.1 this night and the numbers for Current Month Earnings in the dashboard dropped up to -58% from yesterdays values

P.S. The script from @BrightSilence seems to show the correct numbers.

@littleskunk and @clement: This seems to be connected to the change in disk space usage. It displays wrong values for my first node to update. 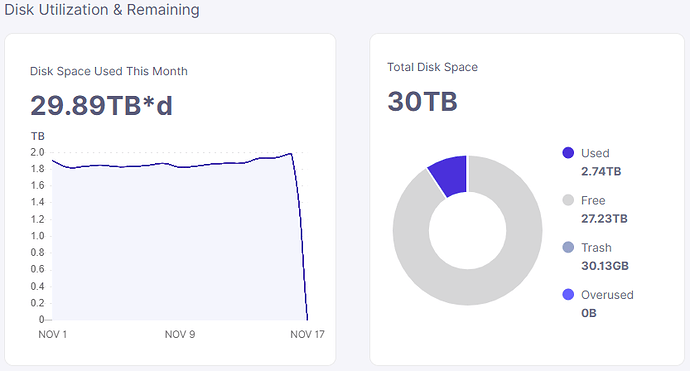 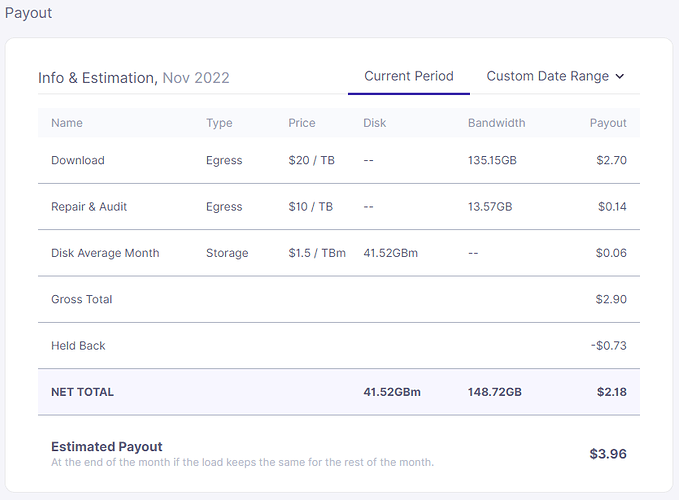 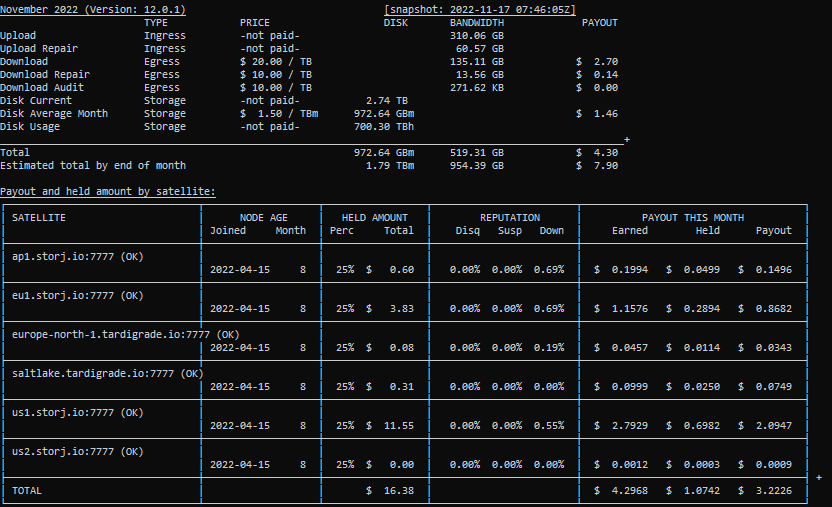 image832×507 13.3 KB
Payout info matches except for disk average month… which shows a whole different wrong number compared to the other dashboard screenshot… not sure where that’s coming from.
2 Likes
Discrepancy between B*h reported by satellites and storage used on node (impacting node payouts)
BrightSilence November 17, 2022, 8:45am #3

On the right you can see the correct value of 2.74TB used, but the graph shows less than 2TB per day.

This discrepancy seems to predate the update. This is on a node which hasn’t been updated yet. 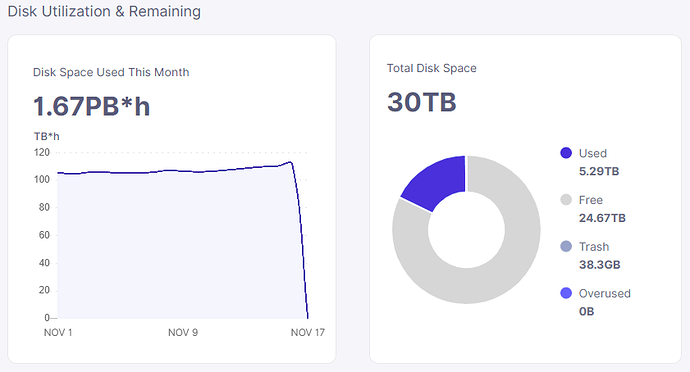 I’m seeing the same problem on my 1.67.1 node as well.
I was wondering why my earning dropped on grafana all of the sudden.

Thanks @BrightSilence, I just want to be sure of what is happening before I comment or do anything about this.
My quick guess is that the payout is probably still calculating using the tb*h… So it’s probably getting the total disk space used this month and dividing by (24*30) instead of just 30:

Submitted a quick PR here https://review.dev.storj.io/c/storj/storj/+/8912 that fixes this.

Some friendly advise for the future. Don’t use an existing variable and give it a different meaning. This wouldn’t have happened if you had simply calculated a B*d variable based on the existing one in a new variable.

Submitted a quick PR here https://review.dev.storj.io/c/storj/storj/+/8912 that fixes this.

The other issue I outlined with some (many) of my nodes showing highly different numbers for TB*d compared to total stored is unrelated. I’ll create a different post around that.

Is there going to be an update that will fix this before next payment run?

It’s a visual bug, it doesn’t affect payouts.
The fix would be likely in the next release.

It may not affect payouts, but for everyone graphing our nodes outputs, we now have an undetermined amount of time where those graphs will have incorrect values. While its only annoying, its very annoying.

My node on testnet is already running 1.67.3, which seems to have fixed this issue. 1.67.1 is currently being rolled out to production nodes. It’s possible 1.67.3 will make it to production nodes as well. In that case it might be sooner than the time between normal update releases. It just depends on whether Storj deems it important enough to publish a bugfix release for this. Perhaps @clement can enlighten us. But keep in mind it’s the weekend now, so I don’t expect anything (release or response) until monday at the earliest.

I have just found that my node’s estimated payout has dropped significantly after checking the dashboard today and after checking things out I realized my Disk Average Month has dropped incredibly low, from 60+tb/day to just 3-4tb/day, which resulted in the decrease of the payout. I have checked the data disk, the node and the logs, and is unable to find anything that indicate any problem.

Running docker logs storagenode 2>&1 | grep -E “GET_AUDIT|GET_REPAIR” | grep failed returns nothing, which I assume there is no problem with audit.

However, I do notice that there are yellow exclamation marks on all satellites, which might indicate something is wrong, but i couldn’t figure out exactly what is.

Attached is the screenshot of my node dashboard. 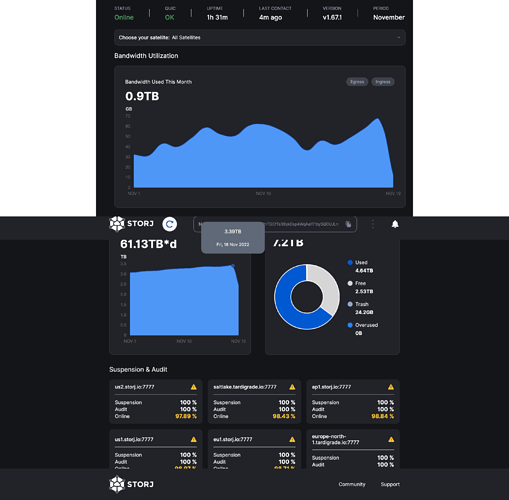 It is a re-used variable bug.

I think multiply by 24 to get the actual number

Thanks for the reply,

Is there anything I can do on my end?

Will it affect my actual earning? Or the value that is displayed on the dashboard is purely for display and is different from the actual value that will be used to calculate my earnings?

EDIT: Thanks for merging the post. I now understand what’s going on.

No, this does not affect your actual earnings. The issue has been fixed, and the fix will be part of the next release.

3 posts were merged into an existing topic: QUIC Misconfigured in v1.67.1

Yep, I can confirm it’s rolling out on one of my nodes as well. The same one that got the v1.67.1 update first. While some of my nodes still run v1.66.1. My guess is they restarted the rollout with the same seed, so nodes with v1.67.1 get fixed before nodes still on v1.66.1 get updated. Smart choice I’d say.

Took only 5 days from report to a fix rolling out. That’s excellent! Thanks @clement and others who worked on this!