At the moment I haven’t received the token through email yet, and I don’t know when I will receive it either, since I thought it would be sent instantly once I subscribed, but I don’t know if there will be any waiting list.

According to the specifications at the time of subscription, in the bars to choose your bandwidth and your storage capacity, the maximum bandwidth is 100 Mb and 20 TB storage.

This configuration is the one to use, or later you can modify everything when installing the client through GUI?

What would be your recommendation according to my hardware?
Greetings!

RAID 5 is made up of eight 10TB disks, and is controlled by an HP P440 4GB hardware controller.
I don’t know if you’ll need more data for an optimal configuration.

You should get the token within 10 minutes. Please make sure you don’t have any ad blockers active. The form is known to have some issues with them. Also try Chrome if you used a different browser.

Be aware that the earnings estimator is a little overly optimistic. It will take time to fill that 20TB. And the first month the node is mostly working on getting vetted, during which it only gets 5% of normal traffic. All this to say that payouts are expected to be relatively low in the first three months or so. But they pick up from then on out.

You can change how much you share later on. But it’s hard to lower shared space if it’s already in use. Used space currently only gets cleaned up if customers delete data. So if you think you need space for other needs in the future, don’t start out sharing too much.

As for the hardware, it’s probably overkill for Storj. But you seem to be using it for other stuff as well. It will work great. I would however really recommend against RAID5 for arrays of the size you are talking about. That’s kind of asking for trouble. I highly recommend at least moving to RAID6.

As for the caching, I hope that’s read only caching if you’re using RAID0. For the node performance I would actually recommend making that a RAID1 and using it as read/write caching. That could really speed up writes to the db’s.

Hey, thanks for your answer.

So I’ll start with 10 TB, and I’ll increase it over time.

As for RAID5, I can’t change it, because it already has data, although I don’t like to lose two disks with so few physical disks.

Right now I just made again the request for the token to be sent to me, and it didn’t take more than two minutes. Yesterday I did it through Firefox and you can see that there was some problem.

I have another question about the bandwidth and DDNS allocation. If by assigning a bandwidth to the application, that bandwidth will only be exclusive to Storj? As for the DDNS, I have it configured in the router, do I still have to follow the installation process as indicated on the website without making any changes?

As for the caching, I think I will not use that resource for Storj.

8 disks is not few disks. You may think you’re running a small risk, but you’re absolutely not.

Please read this: The Latest - Whether RAID 5 is still safe in 2019 - Digistor Australia

If you don’t want to read the entire article, here is the most important image. 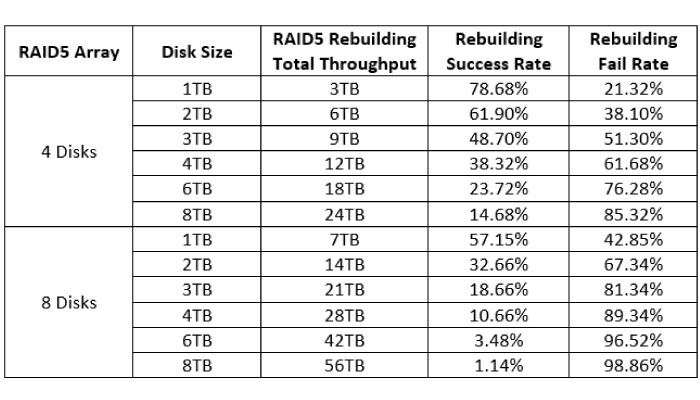 Have enterprise level HDD’s with lower URE rates? The image does look better, but still not great at all. 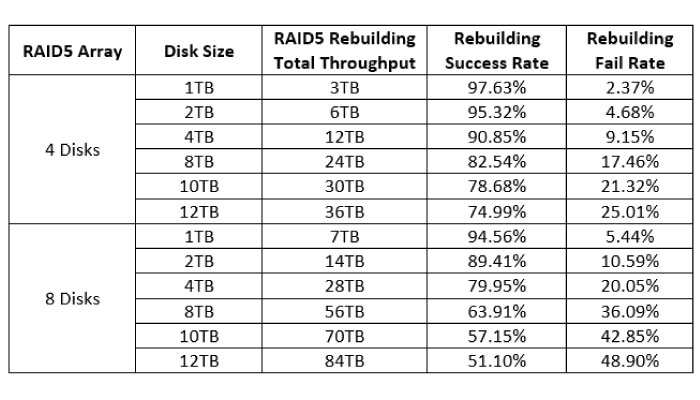 The bandwidth setting is no longer active. It never really worked to begin with and it has now been deprecated. It doesn’t matter what you fill in there. It will be ignored.

DDNS on the router is the best method if your router supports it. You don’t have to install and run the DUC on your node machine if you use your router to update DDNS.

The records are HGST He10, and I’ve had to replace some of them and nothing has ever happened to me. To avoid the corruption problems of the RAID, I think the P440 controller and the 4GB of cache take care of those possible problems.

I wish I could have it on a RAID 6, but it is a big waste of space, and now I only have 20 TB free in the whole RAID. The controller can do the migration online, as it can also do the band change, and you can tell it if you want it to do it fast or slow, with the aggravation that you can lose performance while it is doing the migration, or not lose performance if you tell it to do it slow.

As for the DDNS, as you say, I will skip that step because I have already configured it in the router for a long time.

Do you know anything about the attacks that the dedicated port for the node may receive? The router I am using is not the one provided by the ISPs, and normally it receives updates, but having this port open, it can be prone to attacks.

Thank you for your conversation!

The good news is that with those HDDs the second image would apply. That still gives your array an over 40% chance of failing on a rebuild. And no amount of caching is going to protect you against a URE while one disk has already failed, since there is just not enough data available to recover from that. I know giving up 10TB sounds like a lot. But it’s a hell of a lot better than losing all your data. I hope you at least have solid backups and no business continuity relies on this system being up and running. You can do what you want of course but I just want you to take an informed risk if you choose to do so.

Attacks aren’t necessarily on ports, but on the software listening to that port. Of course nobody can promise that any software is bug free. So I can’t say much there. I trust Storj has done a good job to protect against attacks.

If you are absolutely right, I will still migrate in the future, as long as there is enough space, of course.

I’ve just started the node, since I’ve installed everything. But it tells me that I’m offline, and I don’t know if it’s because it’s very recent or because there’s something wrong with it.

Then there is the choice of the satellite, I choose the satellite that I think will be closer to me? Because I see that there are several satellites in Europe; North, West, Central Us, Stefan.de…

But it tells me that I’m offline

My Node is OFFLINE for 2 hours FAQ

It should connect in seconds. There are a few things you should check. Start with checking the port. On https://www.yougetsignal.com/tools/open-ports/?port=28967 you can fill in the domain or IP you are using in the run command. Then check the port. If it’s closed, it could still be several things. Make sure the WAN IP you see in your router settings matches the IP shown on the above page. Make sure your port forward is set up correctly. That means no filter on incoming IPs, forwarding to th…

Then there is the choice of the satellite, I choose the satellite that I think will be closer to me? Because I see that there are several satellites in Europe; North, West, Central Us, Stefan.de…

You will got the data from customers of those satellites. It’s not a selector to prevent or allow the traffic, it’s just a filter to show the usage from the customers of the selected satellite

At the end I could solve the problem, and it is that in part 8 of the installation through Windows GUI, I did not incorporate my name DDNS:PORT. I deleted the application and the storj folder in C/ and when I reinstalled it, I incorporated the DDNS and everything worked correctly. I didn’t put in the DDNS because I thought that since the router already has it assigned, at this point it wasn’t necessary.

As for the satellites, I have already understood how they work, although I thought I should choose one by proximity, because I did not know how they work.

It seems the P440 supports online RAID level migration. Do yourself a favor and use it. 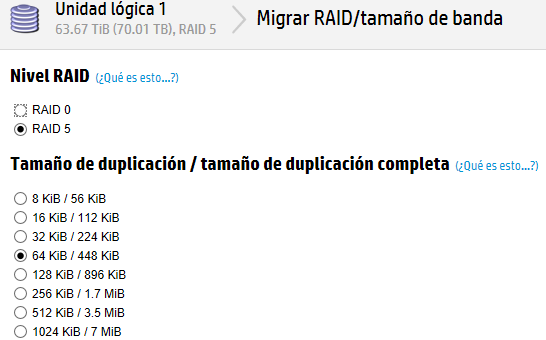 There is no specification that you cannot migrate to RAID 6.

I’m afraid you’ll have to consult the documentation or do some googling yourself. I personally don’t have experience with this controller. There may be conditions that apply.

Yeah, I was looking into the HPE community. I’ll have to ask there, because I can’t find anything related. Thank you!

On My 410i i had to input a Serial just to have the ability to do Raid6. Dont know if its the same for 440 though

Well, I’m sure it will be the same, because I have enough free space to make a RAID 6. The thing is that it’s an HPE ML110 G9 and I don’t have any free bay anymore.

Är if this works for you.
I used this Serial to get raid 6 work.
Since i have outdated hardware I didnt have to buy Serial for Raid 6
raid6 34T62-N84MB-7DQGY-G7XGT-YTQ63

Use the Serial in the ACU.

If you have more sas ports you can get sas to sata cables. Works perfekt

Thank you very much for your generosity, but it tells me that the key introduced is not supported by my controller, so I will keep the RAID5.

I also don’t see so dangerous to have a RAID5, I have been with it for two years and I have never had any problem, I even rebuilt two disks and absolutely nothing happened.

What I am going to do is to incorporate the STORJ data folder to sync it for a backup on the unlimited Google Drive.

Ah, and the P440 controller only has a SAS port, but it’s that specific one that’s wider than normal (I don’t know what it’s called) but it’s like two SAS in one

Ill guess its just for 410 controllers then.
You could get a sas expander if you need more storage.
I bought One and it supports 24 3,5" hdd.

No idea to sync since the data from storj change more or less every second.

You Will find a way you comfortable with

No idea to sync since the data from storj change more or less every second.

I didn’t know those files changed so constantly. So it’s unfeasible to back up to the cloud, only me and RAID 5 are left in danger, even though I have all my trust in my beloved server. Thank you very much!

You get new files every minuter.
Lets say that your hdd fails and you use your backup,

If thoose new files gets an audit you are bound to fail and gets DQd on that sattelite.

All depends on what gets audited and downloaded.
If the file isnt there its downhill.

Have a nice day

This backup is useless. If you restore your storagenode, it will be disqualified because of missed pieces since backup made.