For storing all statistics of the nodes, we use prometheus. So choose one PC/Server where you want to run prometheus. It doesn’t need to be a powerful PC and it doesn’t need much space, you can decide how much space prometheus is allowed to use or how long you want to store your statistics. However, make sure you choose a PC (or a directory) that doesn’t write to an SD card as that would shorten its lifespan significantly.
On that chosen PC we first create a prometheus.yml file in a location you prefer:

Then we create a prometheus container:

What you need to change in this command:

The argument --user 1000:1000 makes the container run as the first user of the PC (e.g. pi on an RPI) instead of root. You can remove it if you prefer to run your containers as root but I’d recommend running all containers as a user (unless they only work as root but all containers in this How-To including the storagenode can run as a user. Warning: Don’t change from root to a user! It will mess up your storagenode as the filesystem permissions will still be wrong.).

Don’t change the other arguments in the command.

The missing directories will be created on the first start of the container. If you however chose a location other than the os harddrive, you might want to use --mount for the prometheus storage directory like you do with the storagenodes, so that a HDD disconnect doesn’t result in the database being written to your OS drive (in which case those directories have to be present before you start the container).

I’m mostly using Prometheus to monitor stuff and was in need for storj exporter to monitor things like audit counts and uptimes per satellite, data as reported by storagenode etc… So I made one: [image] Checkout the README to setup Storj-Exporter Update exporter to latest version: Use watchtower or update manually using the following commands: docker pull anclrii/storj-exporter:latest ; \ docker stop storj-exporter ; \ docker rm storj-expor…

So in short, do this on every PC that runs a node and run it for every node on that PC (with the required changes described below):

For arm-devices you need to build the image yourself:

What do you need to change in this command? (for all architectures)

After starting the container you can check if it works by visiting: http://<“ip of node”>:9651 and it will print a lot of information.
If you run netdata on your PC, make sure to follow the netdata section in the storj-exporter repository to disable netdata’s polling of the exporter port as this will result in a heavy CPU load on your PC.

Edit your prometheus.yml with your favourite editor and add the following job to the scrape_configs section:

What do you need to change in this section?

If you run multiple nodes on multiple devices, you have to add such a job section for each node on each device with the appropriate ip and port defined in the last step.

Now restart the prometheus container to use the changed configuration.
Then visit http://<“ip”>:9090/targets where you can see all your job configurations and if that exporter endpoint could be reached. Wait a while until all endpoints have been scraped to see if all your configurations work correctly.

Install grafana on the PC your running Prometheus (or on any other but this would be advantageous):

What do you need to change in this command?

After starting grafana, visit http://<“ip-adress”>:3000
You will then need to log in for the first time. The default user and password is both “admin”. You’ll have to change it afterwards. 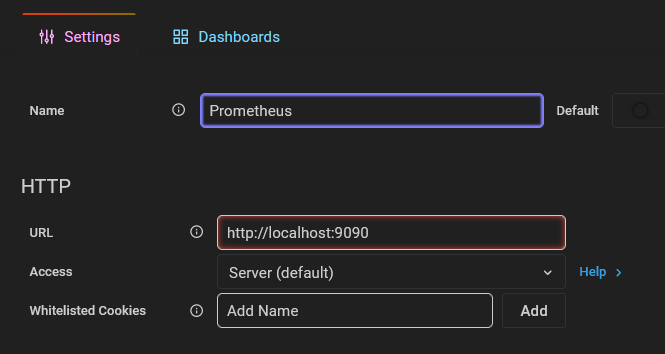 Replace “localhost” with the IP-address of your PC that is running prometheus.
Then Save&Test.
The overview of added datasource should then look like mine, where you can see the Ip-Adresse of my host “http://192.168.178.10:9090”.

Now you need a dashboard for your nodes: 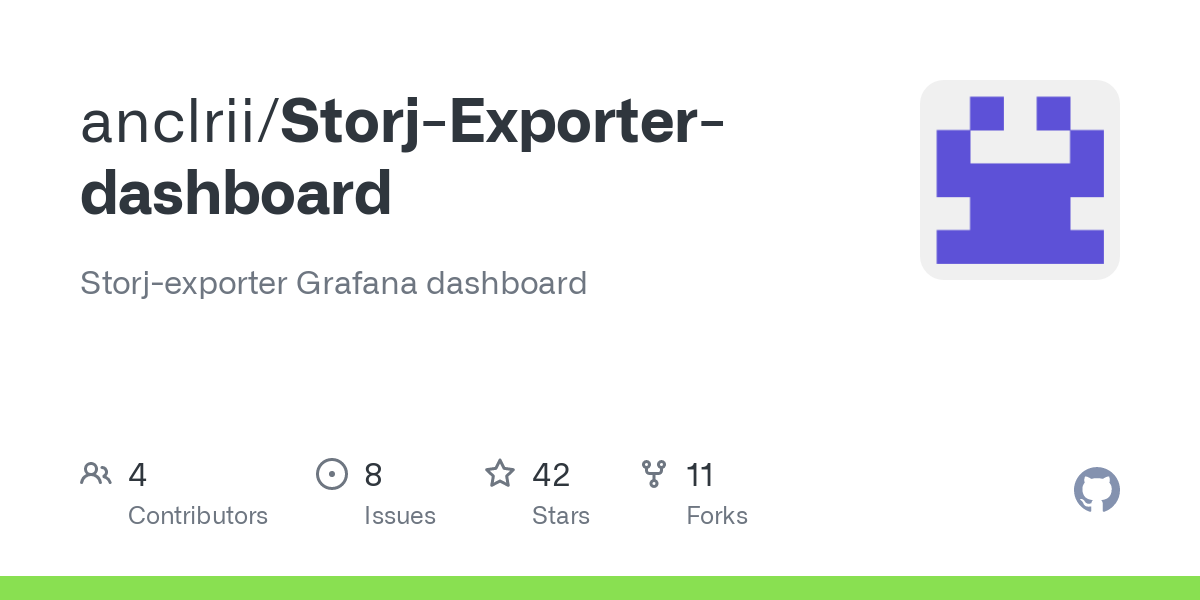 Storj-exporter Grafana dashboard. Contribute to anclrii/Storj-Exporter-dashboard development by creating an account on GitHub.

Copy the boom-table.json from https://raw.githubusercontent.com/anclrii/Storj-Exporter-dashboard/master/Storj-Exporter-Boom-Table.json
and paste it into the json field of the import: 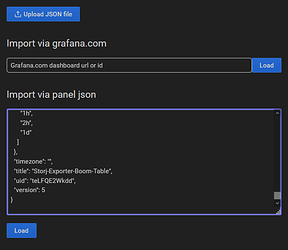 grafik688×596 16.4 KB
Then load and import it. No further configuration of the datasource should be needed and it will show all your nodes. It might take a while until there is enough data to show enough data in some graphs.

Hope this How-To helped you set up monitoring for all your nodes.
Let me know if a step was unclear or where you have problems and we’ll figure it out.

Thanks for this guide ! just running through it now

will update issues in this post, so you can update guide.

Initial Prometheus issue only problem, got it working

Very nice !
I set up the storj-exporter but it gives no information about the node, only overall informations on the system.

and it always gives me this result: 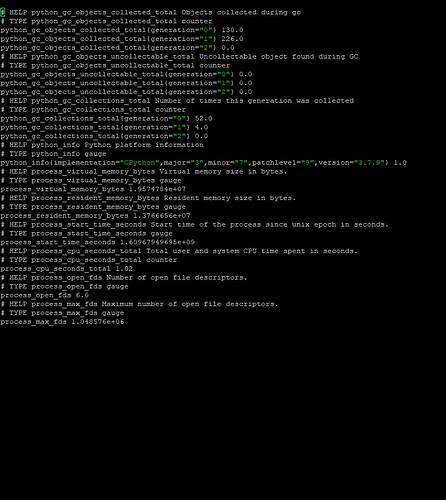 any idea of what I’m doing wrong ?

hmm not sure, try running it without “” (even though both should work fine):

Another option would be to use a standard name “storagenode” just to be sure (I’m reaching now… I have 5 nodes running with 5 names and it works fine…). Maybe for some reason it doesn’t like your name?
I wish the exporter would give more information… Or do you have something in the docker logs for the exporter that could help?

On Alpine Linux - had to change the docker launch command, to remove reference to the YML file as it caused docker to die; think the --config.file bit corrects this.

Oh… it’s possible docker -v creates only missing directories but not files. Updated the how-to. thanks!

I tried removing the “” but nothing changed. I tried to access the logs with $ docker logs storj-exporter but it didn’t return anything.
Also prometheus doesn’t want to start, maybe because it’s a x86 build ?
What should I change to get the armf version ?

Anyway thanks a lot for your help, I’ve wanted to set this up for a long time.

Alright I changed the container name to simply storagenode and now it works !
Still having problems with my prometheus container though, it just keeps rebooting…

Weird… I have no pi node to check it though. I remember having had similar problems once but can’t remember how I actually solved it…
Weird that it works as “storagenode” which implies that it somehow ignores the name given in the docker run command… (unless there’s some spelling error somewhere?)

Prometheus has images for all architectures and should use the correct one automatically. If not, it should show something in the log. You could try running the prometheus command without “-d” so it’s not detached to show output to the console directly.

that’s what I get now

Did you create the prometheus storage location before starting the container? if not, it’ll be owned by root now and the container can’t write to it. Chown it with your main user (uid=1000)

The API_PORT is always 14002 because we link into the storagenode container directly. It would only be different if you change the container internal dashboard port (but nobody does that).

this it what ls -l should output right ? gabriele is the main user

So your prometheus config location is /mnt/STORjHDD/prometheus/prometheus.yml?

What is your prometheus storage location?

I recreated the prometheus.yml file from scratch as per the instructions.