9 Likes
How to preform maintenance (with downtime)
Storage node dashboard
Changelog v0.19.0
Ingress suspiciously low for september
Disqualified or not?
Incomprehensible situation with uptime
Hi, I have a question about uptime and payouts
Storagenode had corrupted data in over 400 blocks on the hard-drive storage
Disqualified for unknown reason
Add a small email SMTP client to the Node
How do I make the folder recognizable when it is using space between the folder name on the command terminal or the Windows PowerShell prompt?
Storage node dashboard API (v1.3.3)
Is there a way to have a more detailed report on how the node is doing?
No other messages except "PermissionDenied desc = untrusted peer"
Storagenode dashboard API. curl: (52) Empty reply from server
No Usage This Month
New Storagenode on Docker Windows with linux container not working
Vetting / audit process duration
Storagenode connected but 0 usage
Score calculation correct?
Score calculation correct?
SNOboard doesn't work in IE (which is OK)
Switching to Docker Enterprise
Script for Audits stat by satellites
Storj Windows GUI offline New setup
Audit, upload and download errors
Storj Windows GUI offline New setup
Node untrusted error
How does "Disk Space Used This Month" work?
Didn't notice the switch to beta
Weird behavior observed.... or maybe there's a reason?
Satellite only one now
Is there API to interact with storj programmatically?
littleskunk August 27, 2019, 9:17pm #2

A few words on how to read the output:
The audit and uptime reputation is alpha / (alpha + beta). Alpha should be as high as possible and beta should be close to 0. In that case the result is 1 aka 100%. I believe that is the score but as long as I haven’t seen a storage node with a bad score I am not sure about that assumption.

If you are failing audits alpha will decrease and beta will increase. If you hit 0.6 you will get paused. We have a few bugs in place that we need to fix one by one. If you got paused for no reason please file a support ticket and we will double check that.

There are no penalites for failing uptime checks at the moment. We are working on a new service to track the uptime. You can read more about that here: Design draft: New way to measure SN uptimes

Highest alpha values you can get are 100 for audits and 20 for uptime.

I try to request some information and not get any data:

I am seeing the same thing as @Odmin, no data returned when querying the api but netstat is showing that the container is listening on that port.

I am having the same issue here, no data is returned

@littleskunk I found root cause of this issue, port forwarding is not working when this service is lissening on 127.0.0.1 inside container, we should change it to listen on any or local ip

I installed curl and jq inside container and test it again: 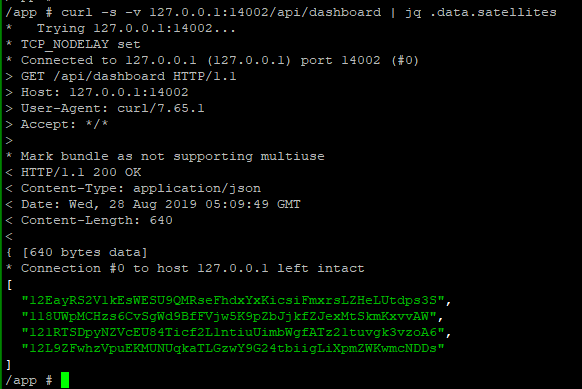 Could you please tell what parameter can be put to config.yaml for changing listening this service?

I set this in config.yaml

restarted container and it works now.

It doesn’t look like it’s directly compatible with prometheus as is. It would be really nice if it was.
https://prometheus.io/docs/instrumenting/writing_exporters/

I don’t like that config change. We should solve that via the docker file only.

This problem is caused by docker and one day we will support running the storage node without docker. In that case the port will be open for everyone. If we solve the issue with the docker file instead of the config file we can make sure nobody is opening the port to the outside world.

Now I missed to say thank you for the feedback

I see what you mean. Still there may be cases where one would want to expose this port to external interface to pull metrics remotely. Access may be restricted to specific ip/range via the firewall then. Does this port expose any sensitive data/controls?

While we’re on it, are there any sensitive items with Storj at all other then wallet key? I can see people posting their node ids and wallets here so I guess they are safe? What’s the risk of leaking identity files?

Since I run multiple nodes and you have to query multiple sattelites I wrote a script (quick and dirty, I don’t know much about bash programming) to query all that. You have to provide the port it should query:

Confirm, after update to v0.19.5 port opened by default and no need add specific settings to config.yaml

@cdhowie the images are created from Alpine Linux so they are very minimal.

They don’t have wget, curl nor bash, for example.

I just tried it and have to confirm: there is no wget available in the container.
Apart from that the port is exposed by default anyway (at least if you specify the -p option in the docker run command) and will always be exposed when the SNOboard is completely implemented so I wouldn’t worry about that.

The other reason why my script requires to specify a port is that I run multiple nodes and then you have to have different ports for the API.

You just said “it’s exposed when you expose it”

It’s only exposed to all IP’s BECAUSE it’s running in a docker container for now, which limits that exposure. The advise is also to add the port mapping as -p 127.0.0.1:14002:14002 to limit exposure to local host. I’m almost certain exposure will be limited to local host by default when they switch to binaries.

What’s your point? The script is designed to run on localhost not across the network, it connects to localhost.
And exposing the port using the parameter -p in the run command is the specified way of STORJ.

I thought you were talking about it being exposed beyond local host, but I now realize you never were. Please ignore my previous statements.

That’s very odd. docker exec storagenode wget definitely works for me, and I haven’t customized the docker image at all…