based on my ideas and findings from one of my previous posts, I have published my “health check script (linux + macOS)” on GitHub.

Please feel free to support, subscribe or comment. I’ll release updates soon, in order to make it more self-descriptive and common to use for everyday usage. 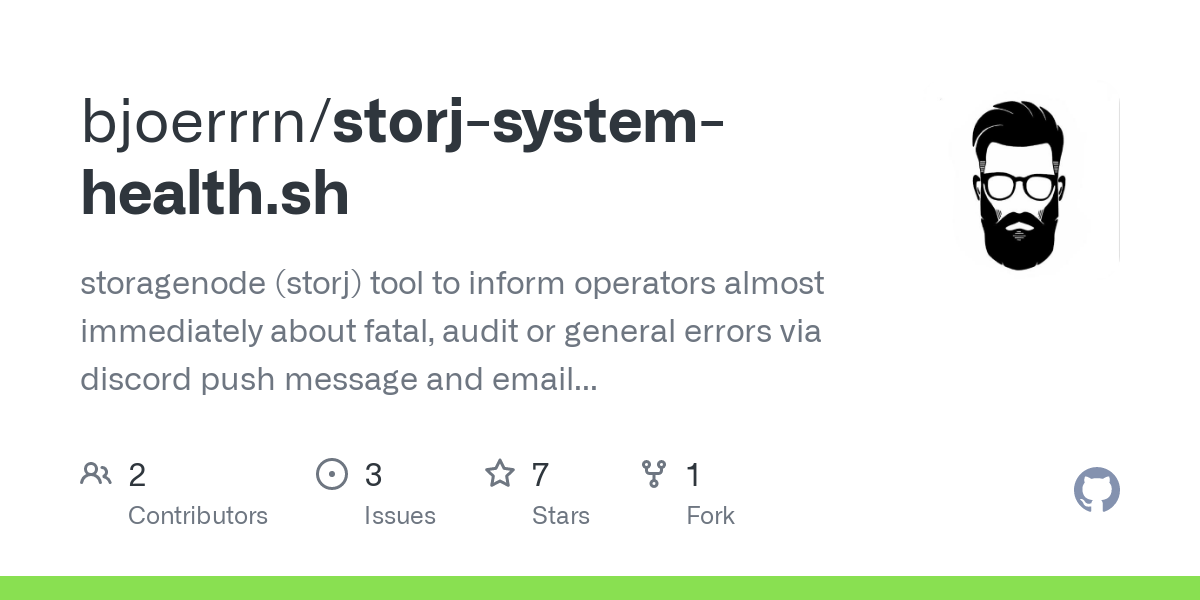 this linux shell script checks, if a storj node runs into errors and alerts the operator by discord push messages as well as emails. requires at least one storj node running with docker on linux.

setting up variables in *.credo

you will need to modify these variables in *.credo for your specific node and smtp mail server configuration. the *.credo file must not include comments and blank lines, the following description is just for your explanation:

make sure, your script is executable by running the following command. add ‘sudo’ at the beginning, if admin privileges are required.

you can run the script in debug mode to force a push message to your discord channel (if enabled) although no error was found - or without the debug flag to run it in silent mode via crontab (see automation chapter).

optionally you can pass another path to *.credo, in case it has another name or source:

in order to use the estimated payout information, which looks like so:

… you should set your crontab to be run around 23:55 UTC. You need to adjust the timing, if you have a couple of nodes and/or huge log files to be analysed: the script needs to be finished before the next full hour, ideally latest 23:59:59 UTC.

it also supports a help command for further details:

to let the health check run automatically, here’s a crontab example for linux, which runs the script each hour.

for macos please be aware of the following specifics:

issues and pull requests are welcome. for major changes, please open an issue first to discuss what you would like to change.

if you want to contact me directly, feel free to do so via discord: Discord

There was a huge performance improvement recently and I managed to switch of disturbing, not to say spamming email alerts, in case an error was found.

On top of that, the script now warns in case of several thresholds missed, like repair up- / downloads (risk of getting disqualified), normal data up- / downloads and if there was no upload / download activity within the last hour.

Here’s a more or less complete list of the current features implemented:

“disk usage per mount point” (in case of multinodes) needs to be extended, but does not harm the main functionality of the script (alerting in case of errors/issues).

I changed the topic to a wiki, now you can update it any time.

Is there windows version for this one?

Unfortunately no. Not sure if it works, when you run it within a Linux VM and

These two things should be the only settings to be made to let it work.

example output from the verbose mode:

until v1.9.2 - feature and improvement releases: